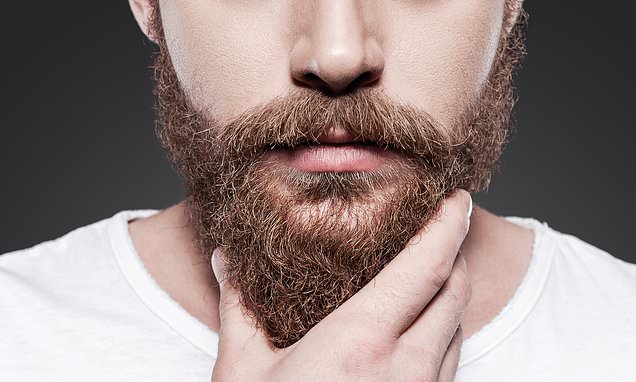 Women DO prefer men with beards – but those who don’t may be put off by an evolutionary fear they harbour LICE or fleas, study claims

Women are more attracted to men with beards because they make them seem more physically and socially dominant, a study has found.

But they may not be a sign of cleanliness – women who didn’t like hairy faces could have been put off by an evolutionary fear that they might contain lice or fleas.

The same women who preferred clean-shaven faces were also the ones most afraid of parasites and pests like ticks or public lice.

Researchers quizzed almost 1,000 women in the US on their attitudes towards facial hair in potential long or short-term partners.

Generally, fully-bearded men with strong masculine faces – solid jawlines and wide cheekbones – were rated as the most attractive. 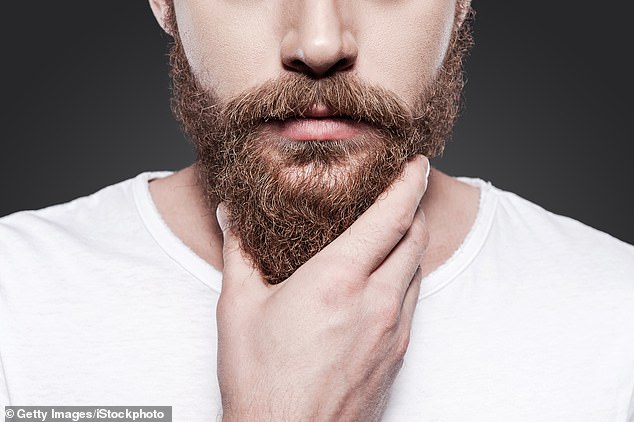 Women may be put off by bearded men in fear of pubic lice or fleas, a study suggests

Researchers at the University of Queensland in Australia presented a total of 919 American women aged between 18 and 70 with 30 images of three different men.

Each man’s face had been photographed with a full beard or clean shaven and later doctored to look both feminine and masculine.

A man is generally considered masculine if he has a protruding brow ridge, widened cheek bones, a thick jawline and deeply set narrow eyes.

As faces appeared, participants were asked to rate how attractive they thought the men were for long-term and short-term relationships on a scale of zero to 100.

The hairier the face, the better than man seemed to fare.

The researchers led by University of Queensland delved into what a man’s facial features and hair says about him, based on previous research.

Studies have shown facial masculinity is regarded as an indicator of physical strength, social assertiveness and fighting ability.

Therefore, women may be drawn to a masculine face because it represents protection and health.

Men with beards have previously reported stronger feelings of masculinity and have shown to have higher levels of serum testosterone. This, in turn, is linked to higher social dominance.

However, unlike facial masculinity, there is no evidence that beardedness reflects men’s health or disease resistance.

Women also judge the attractiveness of men based on how attractive they rate themselves.

It has previously been found that women who feel physically attractive are more drawn to masculine men.

The findings showed men with a masculine, bearded face, were rated as the most attractive by the women both for short term and long-term relationships.

Facial masculinity was also rated as more attractive than a feminine face for most scenarios.

The researchers, led by PhD student Tessa Clarkson, suggested there are a number of possible reasons why.

They added that facial hair can emphasise masculine traits, such as a large jaw, while masking unattractive parts of the face.

However, women who are disgusted by or were afraid of hair-borne or skin parasites, did not like beards.

As part of the study, women were also shown images of parasites, such as ticks and pubic lice, and were asked to rate how much much they feared, avoided, and disliked them.

This could be because the women think beards are a sign of poor grooming habits, the researchers said.

From an evolutionary perspective, humans have evolved to have less body hair because it can harbour disease-carrying parasites.

Women in the study also rated their ‘disgust of pathogens’ which judged their feelings on body odour, stepping on dog faeces or mould on left over food. 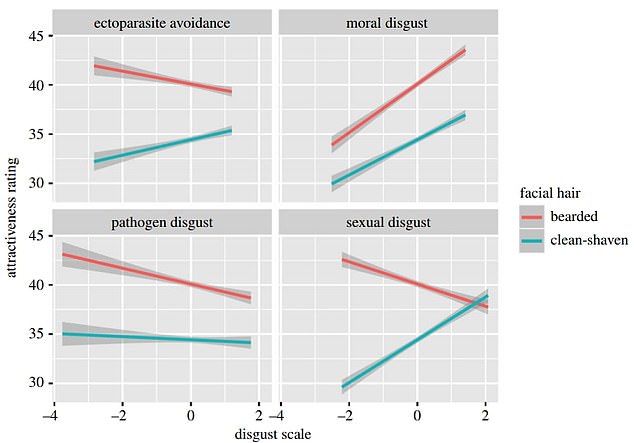 Women who did not like parasites (ectoparasite avoidance) and had sexual disgust preferred a clean-shaven man. Women who were grossed out by pathogens or immoral behaviour were more drawn towards bearded men, the findings show

Women who had a higher ‘disgust of pathogens’ were more likely to prefer beards, suggesting they were a marker of good health.

And women who were more disgusted by ‘immoral behaviour’ were also more in favour of a hairy chin. This, the researchers said, could be because those women had more traditional relationship views and felt beards helped men to fulfill their male role.

The study was published in the scientific journal Royal Society Open Science.