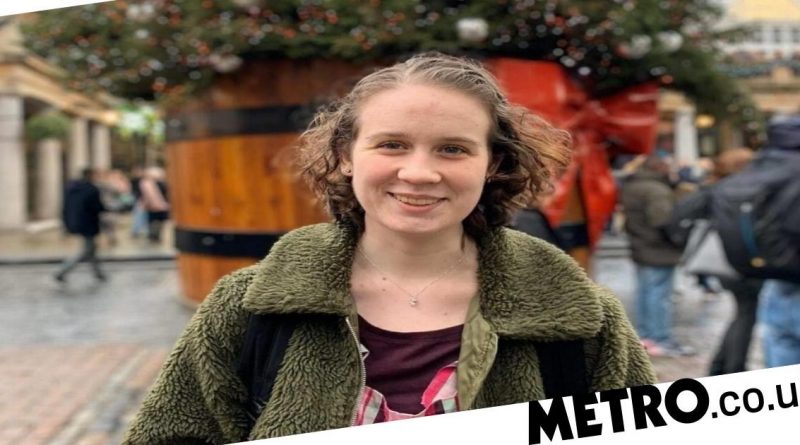 In December 2018, Anna Rachel Gray woke up, went to the toilet, and was unable to pee.

She hasn’t urinated since.

Anna, 22, has Fowler’s Syndrome, a rare condition that means she retains urine and is unable to pass it due to the bladder’s sphincter muscle’s failure to relax.

Fowler’s affects young women and up to half of the patients affected have polycystic ovaries.

Anna, from Bath, says that up until the day she suddenly couldn’t pee, she had been absolutely fine.

She tells Metro.co.uk: ‘The previous day had been completely fine! The first symptom was that I couldn’t wee – no matter how hard I tried and then, despite drinking water regularly, sitting in the bath for prolonged periods of time and listening to the sound of running water, I was unable to go.

‘This went on for five days.’

After not peeing for 24 hours, Anna called her doctor and explained what was going on. The GP offered to prescribe her laxatives, but told her there was ‘nothing else they could do’.

She continued: ‘I tried to explain that laxatives wouldn’t be helpful but they didn’t seem to understand what I was trying to say. I then called the next day and was met with the same response.

‘On the fifth day of experiencing symptoms I ended up calling 111 and was given a doctor’s appointment.’

When Anna finally saw the GP, the first thing she was told was that ‘things like this don’t happen to people your age’. She says she was told there was nothing they could do to help, as they ‘couldn’t believe’ that someone wouldn’t be able to wee for five days.

‘I was sent to A&E reluctantly where, again, it was difficult to get doctors to believe me’, she said.

‘They said that I must have been able to go to the toilet and that I was probably misremembering things.’

Anna explains: ‘By the time I ended up in A&E I was barely able to walk due to the pain. My bladder was extremely distended and sore – it was also pressing on other organs which was causing a lot of pain.’

Anna had her bladder scanned in A&E and was told that she had over one litre of urine in it, which is the highest that the scanner can detect – so she was catheterised straight away.

‘It was instant relief,’ she tells us. ‘I’ve never had children but the only way I could describe the pain was like I was in labour and being stabbed in the bladder.

‘Usually your bladder has a maximum capacity of around 500/600ml comfortably and so I had almost four times that when I was eventually catheterised.’

Anna was officially diagnosed with Fowler’s Syndrome in October 2019.

She has had a Foley catheter inserted into her bladder for a year, ever since she was first catheterised, and has been taught to self-catheterise, which Anna says ‘is where you put a catheter in yourself every time you need to go to the toilet’.

However, Anna says she found this ‘too difficult mentally’, so decided that a permanent catheter was more suited to her.

She said: ‘I find having a catheter extremely uncomfortable – especially after it has been replaced. I usually have mine changed every two weeks as I experience a lot of bladder spasms which can force the catheter out of my bladder – this is very painful and frustrating.

‘As well as this, sometimes the end will come off the catheter (I have mine on a flip-flo valve so my bladder still fills up as normal) and this leads to the catheter obviously leaking everywhere – due to things like this I am very self conscious when going out and avoid busy places because I worry that it has the potential to leak.

‘My friends and family have been very understanding though.

‘I also experience a lot of infections – a catheter is not supposed to be a long term solution and as it is a foreign body it can lead to frequent UTIs. There have been times where I have been on antibiotics more than I have been off them in a month. I am waiting for a suprapubic catheter which should hopefully be a better solution for me.’

Anna is not currently dating and her sex life is on hold due to the catheter.

She says that when she has her suprapubic catheter – where a hollow flexible tube is used to drain urine from the bladder, by being inserted into the bladder through a cut in the tummy – she might be able to have some ‘normality’ back.

Sadly, Anna’s mental health has suffered drastically ever since she was first diagnosed.

‘It turned my life upside down’, she said.

While in hospital due to her condition, Anna’s mental health continued to deteriorate and she was admitted to a mental health hospital, where she stayed for three months.

She continued: ‘This was absolutely terrifying for me – I have worked as a Healthcare Assistant on psychiatric wards in the past but none of that prepared me for actually being a patient myself.

‘All of a sudden the cards were flipped – I was on one-to-one care for most of my time in the general hospital and had no bathroom privacy at all.

‘I found this difficult for two reasons I guess – the first one being that I struggle with my body image a lot and so having to be watched in the shower was something I found really hard.

‘And secondly because of the catheter – staff members would ask questions and I just felt extremely self conscious about the whole thing.

‘Being sectioned under the mental health act was something I never imagined happening to me.

‘I didn’t believe I needed to be in hospital – I felt that I wasn’t sick enough to justify that.

‘I will never forget the time I waited after my assessment – it felt like an absolute age. And then when they came and told me I had been sectioned I couldn’t believe it.

‘I broke down in tears – all I wanted was to be allowed home but here I was, legally stuck in the hospital and knew that the police would bring me back should I try to leave.’

Anna says that looking back, it’s ‘crazy’ to think that she ‘spiralled’ as a result of not being able to control her bladder condition.

But one thing she has learned from being in the hospital for such a long period of time is that it ‘isn’t a bad thing to ask for help’ – and that she was deserving of support.

‘It also helped me to realise how much things had slipped – I don’t think I was really aware of this,’ she said.

Anna was discharged from the psychiatric ward last year, and has become much more stable. She has a great support team around her and her family have all been ‘amazing’ as well.

Though she is managing well, Anna does experience frequent infections from the catheter, and has been on lots of antibiotics as a result. She also takes medication to try to control her bladder spasms.

Anna is now just waiting for a suprapubic catheter to be inserted. She’s on a waiting list but unfortunately the procedure has been delayed due to the coronavirus.

She has had a trial of Sacral Nerve Stimulation to see if it helped her regain some of her bladder function, but it wasn’t successful. However, it did reduce her pain levels and her spasms were almost eliminated completely.

Anna said: ‘Coronavirus has impacted this as it is not an emergency procedure – I am lucky that I had my trial just before the lockdown but everything since then has been delayed.

‘I am worried about it – I’ve never had surgery before and so I think a lot of it is the unknown. That and that I will wake up with a tube coming out my stomach which will be my new normal! I think that will take time to get used to.

‘As far as my understanding is – it is likely I will struggle with retention for life. There is no evidence to suggest that it will get better although I guess as time goes on and it hopefully becomes more researched and well understood that this will change!

‘I’m hoping that the surgery will allow me to lead a more ‘normal’ life and better pain management. Which for me would be a huge thing after two years of things being tipped on their head.’

The main thing Anna would like people to know about the condition is that it affects ‘every aspect of your life’.

‘The pain can be unbearable and debilitating and it is never something that I, or any other sufferers, would want to lie about,’ she said.

‘I never thought I would be in the position and wish that I had never taken my ability to be able to go to the toilet naturally for granted.

‘I would love for doctors to be more educated in the condition – when I speak to the nurses or GP even now I get asked why I have a catheter and it is almost surprising to them. The condition is rare – but it still affects more people than you might think.’

She adds: ‘To anyone else who is suffering – I am sorry. Sorry that you have to go through this day in day out, sorry that it often feels like there is never an end in sight and sorry that there is no concrete cure or solution.

‘If you ever experience symptoms of urinary retention then please see your GP or local hospital because it is a medical emergency.’