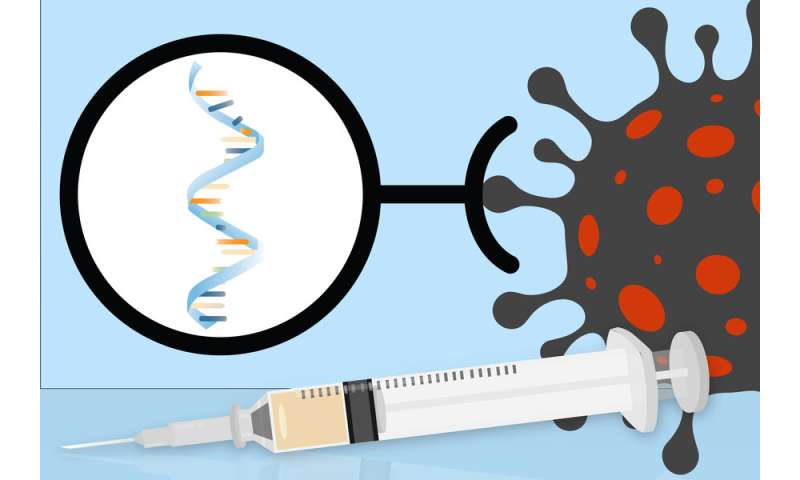 Developing and testing a new vaccine typically takes at least 12 to 18 months. However, just over 10 months after the genetic sequence of the SARS-CoV-2 virus was published, two pharmaceutical companies applied for FDA emergency use authorization of vaccines that appear to be highly effective against the virus.

Both vaccines are made from messenger RNA, the molecule that cells naturally use to carry DNA’s instructions to cells’ protein-building machinery. A vaccine based on mRNA has never been approved by the FDA before. However, many years of research have gone into RNA vaccines, which is one reason why scientists were able to start testing such vaccines against COVID-19 so quickly. Once the viral sequences were revealed in January, it took just days for pharmaceutical companies Moderna and Pfizer, along with its German partner BioNTech, to generate mRNA vaccine candidates.

“What’s particularly unique to mRNA is the ability to rapidly generate vaccines against new diseases. That I think is one of the most exciting stories behind this technology,” says Daniel Anderson, a professor of chemical engineering at MIT and a member of MIT’s Koch Institute for Integrative Cancer Research and Institute for Medical Engineering and Science.

Most traditional vaccines consist of either killed or weakened forms of a virus or bacterium. These provoke an immune response that allows the body to fight off the actual pathogen later on.

Instead of delivering a virus or a viral protein, RNA vaccines deliver genetic information that allows the body’s own cells to produce a viral protein. Synthetic mRNA that encodes a viral protein can borrow this machinery to produce many copies of the protein. These proteins stimulate the immune system to mount a response, without posing any risk of infection.

A key advantage of mRNA is that it is very easy to synthesize once researchers know the sequence of the viral protein they want to target. Most vaccines for SARS-CoV-2 provoke an immune response that targets the coronavirus spike protein, which is found on the surface of the virus and gives the virus its characteristic spiky shape. Messenger RNA vaccines encode segments of the spike protein, and those mRNA sequences are much easier to generate in the lab than the spike protein itself.

“With traditional vaccines, you have to do a lot of development. You need a big factory to make the protein, or the virus, and it takes a long time to grow them,” says Robert Langer, the David H. Koch Institute Professor at MIT, a member of the Koch Institute, and one of the founders of Moderna. “The beauty of mRNA is that you don’t need that. If you inject nanoencapsulated mRNA into a person, it goes into the cells, and then the body is your factory. The body takes care of everything else from there.”

Langer has spent decades developing novel ways to deliver medicines, including therapeutic nucleic acids such as RNA and DNA. In the 1970s, he published the first study showing that it was possible to encapsulate nucleic acids, as well as other large molecules, in tiny particles and deliver them into the body. (Work by MIT Institute Professor Phillip Sharp and others on RNA splicing, which also laid groundwork for today’s mRNA vaccines, began in the ’70s as well.)

“It was very controversial at the time,” Langer recalls. “Everybody told us it was impossible, and my first nine grants were rejected. I spent about two years working on it, and I found over 200 ways to get it to not work. But then eventually I did find a way to get it to work.”

That paper, which appeared in Nature in 1976, showed that tiny particles made of synthetic polymers could safely carry and slowly release large molecules such as proteins and nucleic acids. Later, Langer and others showed that when polyethylene glycol (PEG) was added to the surface of nanoparticles, they could last in the body for much longer, instead of being destroyed almost immediately.

In subsequent years, Langer, Anderson, and others have developed fatty molecules called lipid nanoparticles that are also very effective at delivering nucleic acids. These carriers protect RNA from being broken down in the body and help to ferry it through cell membranes. Both the Moderna and Pfizer RNA vaccines are carried by lipid nanoparticles with PEG.

“Messenger RNA is a large hydrophilic molecule. It doesn’t naturally enter cells by itself, and so these vaccines are wrapped up in nanoparticles that facilitate their delivery inside of cells. This allows the RNA to be delivered inside of cells, and then translated into proteins,” Anderson says.

In 2018, the FDA approved the first lipid nanoparticle carrier for RNA, which was developed by Alnylam Pharmaceuticals to deliver a type of RNA called siRNA. Unlike mRNA, siRNA silences its target genes, which can benefit patients by turning off mutated genes that cause disease.

One drawback to mRNA vaccines is that they can break down at high temperatures, which is why the current vaccines are stored at such cold temperatures. Pfizer’s SARS-CoV-2 vaccine has to be stored at -70 degrees Celsius (-94 degrees Fahrenheit), and the Moderna vaccine at -20 C (-4 F). One way to make RNA vaccines more stable, Anderson points out, is to add stabilizers and remove water from the vaccine through a process called lyophilization, which has been shown to allow some mRNA vaccines to be stored in a refrigerator instead of a freezer.

The striking effectiveness of both of these COVID-19 vaccines in phase 3 clinical trials (roughly 95 percent) offers hope that not only will those vaccines help to end the current pandemic, but also that in the future, RNA vaccines may help in the fight against other diseases such as HIV and cancer, Anderson says.