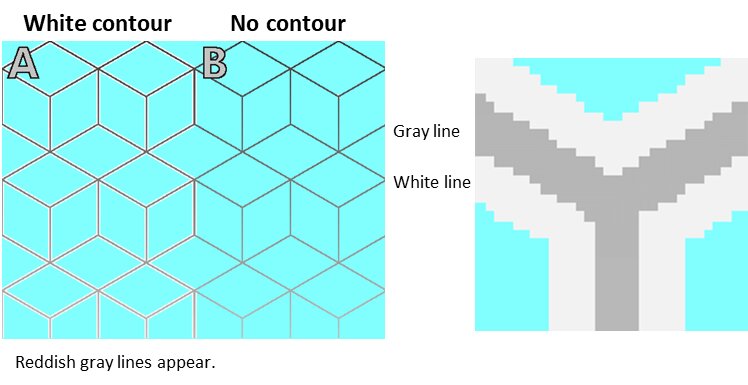 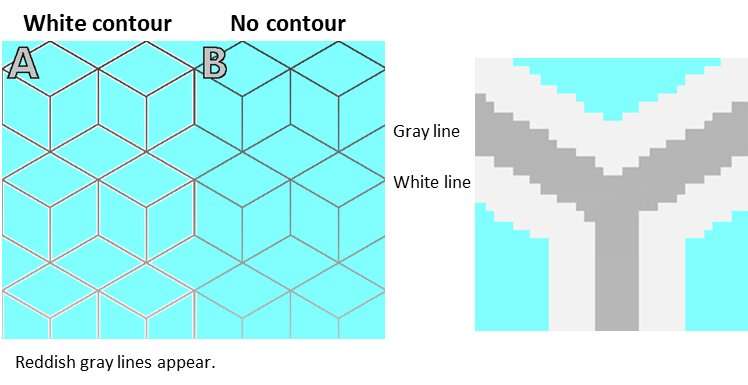 A color illusion that strongly induces color contrast effect has been found by a research team at the Toyohashi University of Technology Department of Computer Science and Engineering, and Electronics-Inspired Interdisciplinary Research Institute (EIIRIS). The powerful visual illusion clarified a century-old contradiction relating to simultaneous color contrast theory. Through a human psychophysical experiment, the team demonstrated that the presence or absence of flanking contours formed from extremely thin white lines could be used to switch between contradictory visual phenomena, enabling consistent explanation for both discrepant theories. This solution alters theories of visual computation relating to color appearance, and is expected to contribute to industrial design and high-definition imaging.

Under certain circumstances, colors and shapes of physically identical objects will appear to be different. This is known as a visual illusion. Visual illusions dealing with colors have long been documented. In the 19th century, a French chemist Michel-Eugène Chevreul has explained that the cause of a complaint relating to textile dyes was not due to chemical reactions but to the visual illusion. These types of optical illusions may have a strong impact on the appearance of a product, with designers having avoided them through trial and error. However, researchers believe that visual illusions are not a failure of human visual function, but they occur as an accompanying side effect of intrinsically important functions. Some novel functions that allow us to see the outside world effectively are often responsible for producing a variety of visual illusions. Thus, discovering new visual illusions is a clue to discover an unknown visual function, and many vision researchers are engaged in such projects.

Upon discovering a new color illusion, the research team realized the potential to reconcile the above contradiction. In the discovered visual illusion, a phenomenon occurs in which a thin gray line atop a cyan background appears red when bordered by a thin white line (Figure 1). The illusion is gaining attention, and was reported in the World Illusion Contest, winning a place as a Top 10 Finalist in the Best Illusion of the Year 2018. Through human psychophysical experiment, it was demonstrated that a strong color contrast was produced regardless of the luminance levels of the gray line, and that the visual illusion effects became stronger the darker the color was comparatively. This result is concordant with the Helson-Judd Effect. On the other hand, with the white line removed, the visual illusion is strongest with identical luminance, reproducing Kirschmann’s Third Law. In other words, the presence or absence of the flanking white line makes it possible to switch between the two contradictory phenomena. A consistent explanation becomes possible by assuming that the adjacent white line created a separate phenomenon in the gray line known as color assimilation. In conclusion, the team succeeded in resolving a contradiction that has existed among visual illusion researchers for some 100 years.

“This new color illusion produced extremely strong illusory effects regardless of the luminance of the gray line,” says lead author Tama Kanematsu (Ph.D. student in the Department of Computer Science and Engineering, and DC2 research fellow at the Japan Society for the Promotion of Science). This contradicts accepted color illusion research dating back to 1891. By incorporating additional knowledge about color constancy into the illusion, I believe we succeeded in illuminating the true nature of simultaneous contrast in the visual system. Moreover, our newly devised color appearance model allows for a consistent explanation that includes past research,” explains Kanematsu.

Lead author Tama Kanematsu says the visual illusion was found accidentally. “Kowa Koida (Associate Professor, Electronics-Inspired Interdisciplinary Research Institute), one of the co-authors, reported seeing purple (which he had not been using) when creating a diagram using light blue and blue lines. Koida first thought it was an optical phenomenon known as chromatic aberration. Upon precisely analyzing the characteristics of the area which appeared purple, we were able to prove that it was a new illusion. In addition, it is clear that this illusion requires an extremely thin line. Without an extremely detailed modern high-performance monitor, it may not have been discovered. This illusion showcased an instance in which a development in engineering contributed to the further development of basic science.”