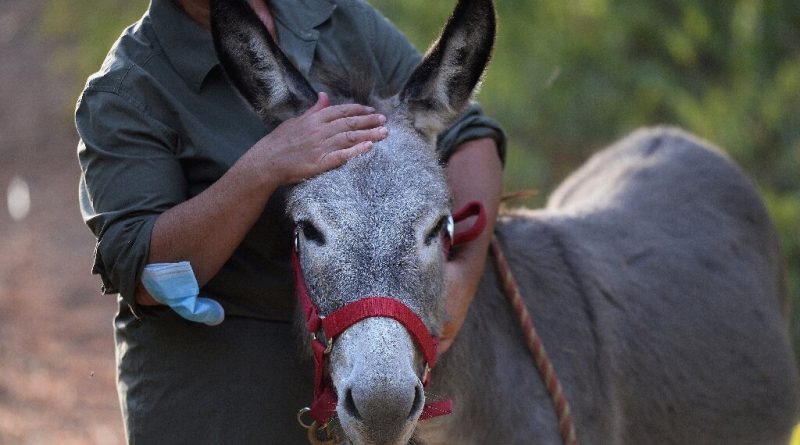 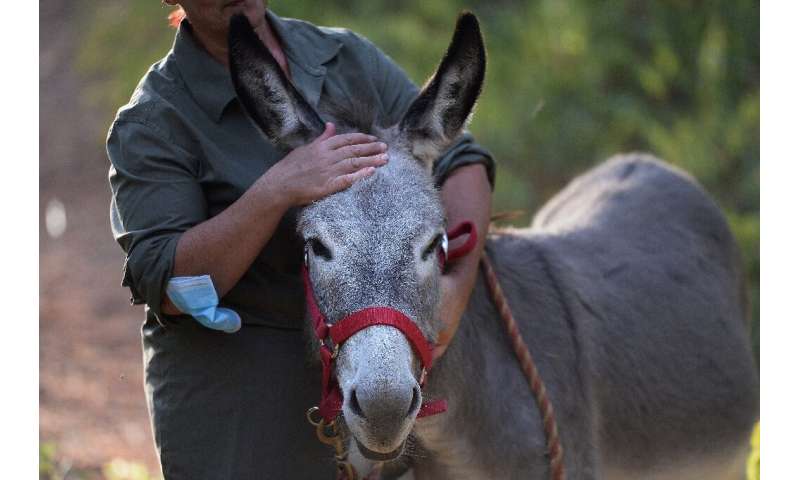 Walking into a dusty paddock, a young nurse is quickly surrounded by a group of donkeys gently nudging her for attention as she strokes their soft noses and feeds them carrots.

When someone places a 10-day-old colt in her arms, Monica Morales squeals with delight, visibly relaxed after a few hours unwinding at El Burrito Feliz—”The Happy Little Donkey”— an association offering free donkey therapy sessions to medics fighting the virus.

Known as animal-assisted therapy, such encounters can help with a range of physical and mental disorders, including stress, depression and anxiety.

Although such therapy is more associated with horses, experts say donkeys are better suited to helping mental or emotional disorders given their gentle nature and intuitive respect for personal space.

“The situation is quite overwhelming, what we went through before is now happening again,” says Morales, 25, who spent months working in a Madrid hospital when the pandemic hit. She is now based in the south as Spain faces a second wave.

“There are more and more patients, and growing tensions among colleagues so being here with these donkeys is really helping.”

Located by a sprawling forest on the edge of Andalusia’s Donana National Park in southern Spain, El Burrito Feliz is a non-profit association with 23 donkeys that have worked with Alzheimer’s patients and children with problems.

The “Doctor Donkey” project began in late June as a way of offering respite to frontline workers battling a virus that has killed some 33,400 people, infected more than 900,000, and left medics traumatised and exhausted. 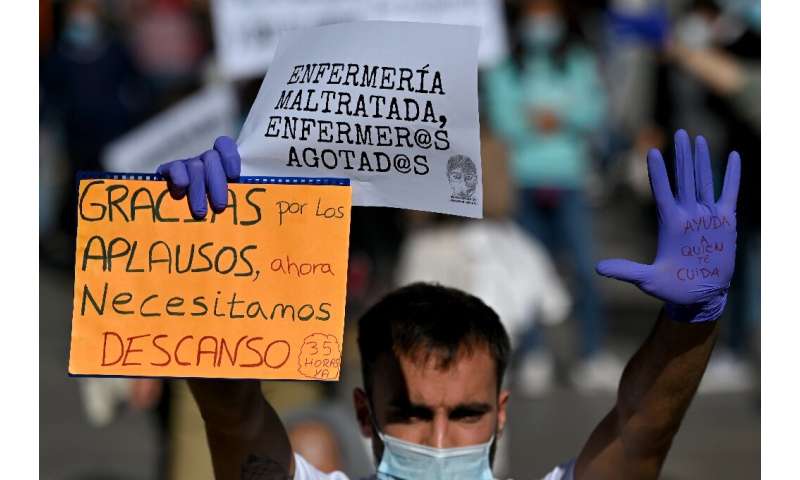 “The huge stress created through the daily struggle with Covid-19 exhausts them, so here they can be strengthened through therapy with the donkeys,” explains Luis Bejarano, 57, who runs El Burrito Feliz.

“They can recharge their batteries to keep fighting another day.”

Bejarano says the idea came from a book about Japan’s therapeutic forests where people spend time among trees to reduce stress and depression as an alternative to therapy.

“The situation generates a lot of anxiety and stress because of the risk of getting infected, or passing it on to colleagues, family members or other patients who are more fragile than usual,” says 31-year-old oncologist Mari Paz Lopez.

And the risk of falling ill is very real, with one in 10 of Spain’s healthcare workers getting infected—twice that of the general population and one of the highest rates in the world.

“We’ve not been offered any psychological help although I know it exists in other places,” says Lopez who works in the southern city of Jaen and heard about the donkey therapy through television. 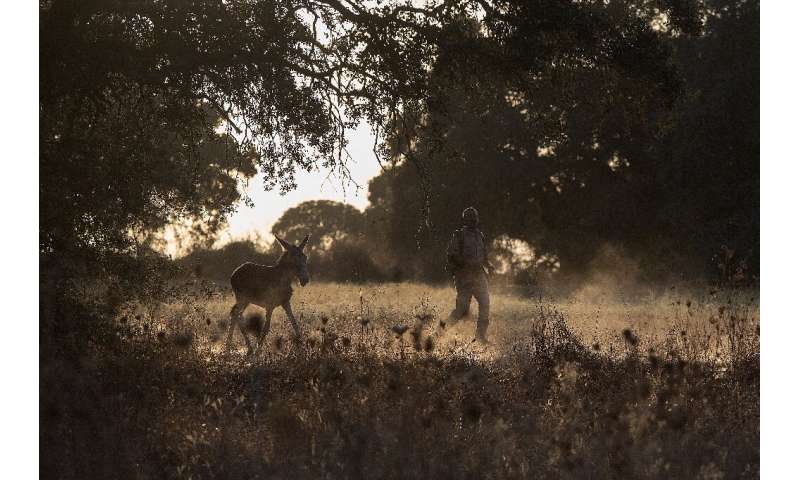 After an hour wandering through the forest with a donkey called Magallanes, she admits to feeling a lot more relaxed.

“They’re animals that inspire a lot of tenderness and that generates a lot of emotional well-being.. and you forget about the day-to-day. I’d definitely recommend it.”

After befriending one of the donkeys, a visitor will go on a guided walk and when confident, they can go back into the forest alone with the donkey and stay as long as they like.

Back at base camp, they prepare food for the animals, and then there is the option of a “donkey bath”—entering the paddock for an immersive experience with the herd.

“Donkeys are very relatable animals and doing it in a natural environment increases the benefits,” says psychologist Maria Jesus Arque, who consulted on the project.

By being in a forest and having contact with an animal, “something happens that allows you to express yourself with another being that does not judge,” she told AFP. 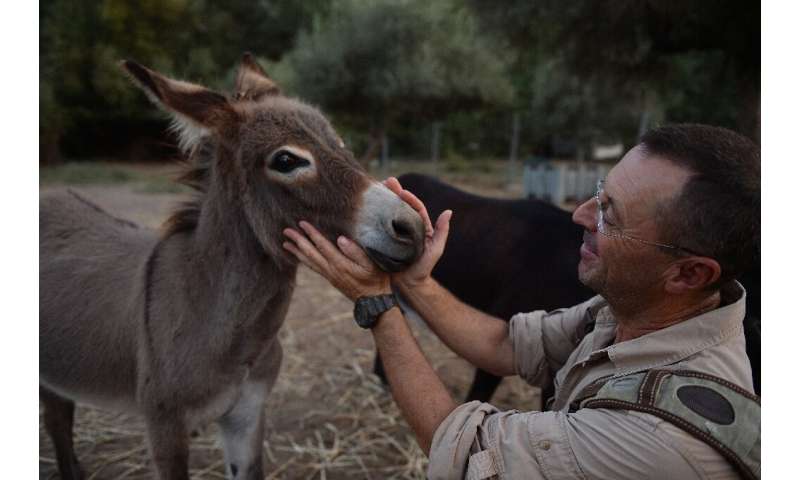 Studies show that animal-assisted therapy triggers changes at a physiological level, activating oxytocin, conected to experiencing pleasure, increasing endorphins and reducing cortisol in the blood which is a product of stress, she said.

“And a 30-minute walk in a natural environment, like a forest, changes the mood.”

At her surgery in Madrid, Dr Nieves Dominguez Aguero, 49, has a pencil sketch of a nurse nuzzling up to a donkey by Cuban graphic artist Ramses Morales Izquierdo as a reminder of her visit in summer.

Talking about the horrific memories of spring still moves her to tears as she recalls patients left in the corridors because of the lack of beds and those who died without being able to see their loved ones.

“It’s very hard, not only because of the pandemic and the infection itself, but because of people’s situations. Unlike in hospital, when you’re a family doctor, you know all about these people, their lives and families.”

Spending a few hours with the donkeys was surprisingly helpful. 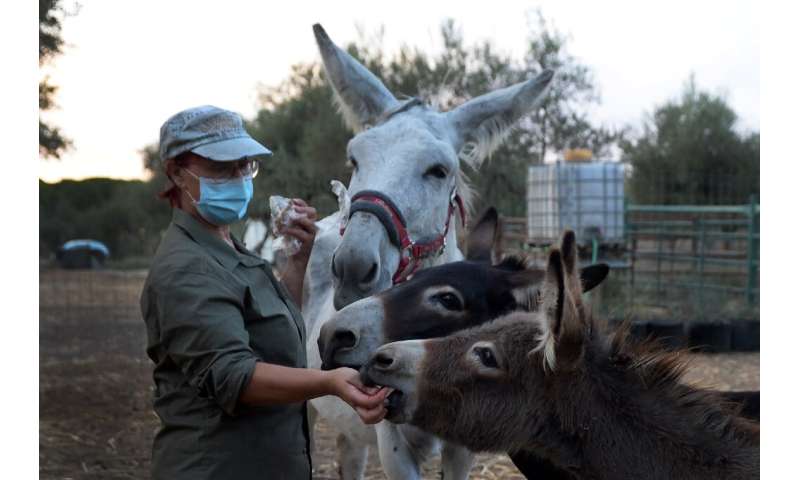 “It was wonderful, really great,” she laughs. “Being with the animals helps you relax a bit and the forest is spectacular. It’s just a shame it’s so far away.”

So far, 25 doctors and nurses have visited the project, although the pace has slowed as cases have spiralled and Spain’s medics have found themselves battling one of the highest infection rates in the European Union.

Although the project was only supposed to run until November, Bejarano is extending it and even considering installing lodgings so people can stay overnight.