Home » What You Should Know About the Link Between Breastfeeding & Depression 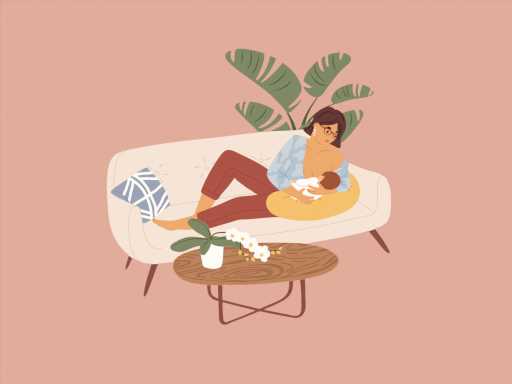 When I started breastfeeding my daughter eight weeks ago, I wasn’t prepared for the emotional roller coaster. I’d breastfed my older kids with no major problems, but things have been very different this time. Three weeks postpartum, I got mastitis. Then I got thrush. The excruciating pain throughout every feed had me in tears, and my baby’s shallow latch didn’t help. Short version: It was a nightmare, and it didn’t take long for my mental health to suffer.

I’ve experienced frequent periods of depression — including prenatal and postpartum depression — so this didn’t come as a huge surprise. But it did get me thinking: Can breastfeeding cause depression?

There’s definitely an association, licensed clinical social worker and maternal mental health specialist Jeanie Witcraft-Shiau tells SheKnows, and it all comes down to hormones. According to Witcraft-Shiau, the hormonal changes that occur before labor and delivery and kick-start milk production can trigger depression in some women. However, no causal link between breastfeeding and depression has ever been established.

“No research has provided a definitive answer to the question of the relationship between breastfeeding and postpartum depression,” licensed psychotherapist Dr. Mayra Mendez tells SheKnows. “Postpartum depression is impacted by multiple physiological, psychological, sociocultural, familial and relational factors.”

In fact, science suggests that breastfeeding may actually improve a mother’s mood due to the increase in oxytocin, the “bonding hormone,” which is responsible for breast milk “letting down,” or moving to the front of the breasts, and is also released in the brain when a person falls in love. “Studies have suggested that breastfeeding may protect against postpartum depression or support speedier recovery from depressive symptoms if postpartum depression is experienced,” says Mendez.

Indeed, some moms may experience a low mood when they stop breastfeeding. “When weaning, the loss of oxytocin and prolactin cycles frequently leaves mothers feeling empty and depressed,” says Witcraft-Shiau. “However, these feelings should typically pass within a few weeks.”

According to the World Alliance for Breastfeeding Action, approximately 40 to 80 percent of all new moms — whether they breastfeed or not — experience “mild and transient mood disturbance” with 13 to 19 percent developing postpartum depression when the symptoms last over two weeks. Additionally, many factors associated with breastfeeding may impact a mom’s mood and emotional health.

“If the woman wants to breastfeed but has difficulties and experiences excessive pain and disappointment, depression may be associated with the breastfeeding experience,” says Mendez. “The same can happen if she struggles with judgment or negative projections from other people, such as those who believe that a woman damages her child if she is unable to or ambivalent about breastfeeding.”

Mendez points to studies that suggest that early negative breastfeeding experiences may contribute to higher risk for postpartum depression. “Women who experience dissatisfaction with their infant-feeding methods, breastfeeding difficulties and low self-efficacy with breastfeeding report more symptoms of depression,” she says. But it’s important to differentiate between the physical act of breastfeeding and the potential health, cultural and situational associations. In other words, breastfeeding itself won’t cause depression, but factors related to breastfeeding might. In my case, it was the infections that made breastfeeding painful that resulted in my low mood and feelings of failure, inadequacy and unhappiness.

Events like this often impact a woman’s sense of self-worth and confidence as a mother. “These events are often beyond the new mother’s control and can contribute to her spiraling into a depression if her breastfeeding relationship is far from what she had anticipated, especially if she perceives her efforts at breastfeeding as failed,” midwife Risa Klein tells SheKnows.

Some breastfeeding moms may be more at risk for depression, such as those who have a previous history or are under extreme stress. And a strong support system is crucial to minimize that risk. “Without timely emotional support and help with the new baby during her initial six-week postpartum period adjustment, also known as the fourth trimester, a woman is much more vulnerable to and at greater risk for postpartum depression,” says Klein.

There might not be a causal link between breastfeeding and depression, but nobody can deny the toll it can take on a new mom’s emotional and physical health. My own scars are still raw, and I’m not just talking about my nipples.

If you or someone you know is struggling, call the National Suicide Prevention Lifeline at 1-800-273-8255, visit SuicidePreventionLifeline.org or text “START” to 741-741 to speak to a trained counselor at Crisis Text Line.

If you’re looking for ways to give a bit more love to your mental health, check out a few of these affordable apps: