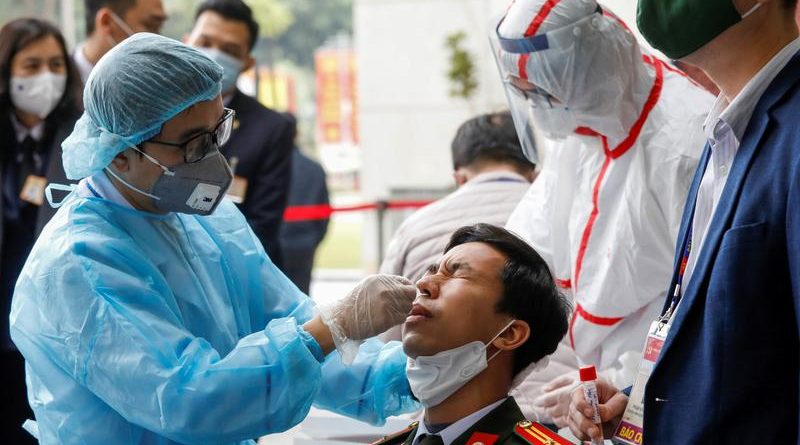 HANOI (Reuters) – Vietnam’s health minister said on Friday a new COVID-19 outbreak was “basically under control” in the areas most affected, as cases spread to Hanoi, the capital, where the ruling Communist party is holding its five-yearly congress.

A health worker wearing a protective suit takes a swab sample from a security officer at the National Convention Center, the venue for the 13th National Congress of the Communist Party of Vietnam, during the coronavirus disease (COVID-19) outbreak in Hanoi, Vietnam January 29, 2021. REUTERS/Kham

Vietnam reported 53 new cases on Friday, including one in Hanoi and eight in nearby Haiphong city and Hai Duong, Quang Ninh and Bac Ninh provinces. That brought the total number of cases in the outbreak that began on Thursday to 149, the government said in a statement.

Health Minister Nguyen Thanh Long told reporters on the sidelines of the party congress that 3,674 tests had been conducted, adding that testing capacity was 50,000 a day, and the outbreak was under control in areas where the most cases had been found.

“In a very short period of time, we’ve controlled the situation and I see a ray of hope,” Long said.

Vietnam has been one of the world’s virus-mitigation success stories. Its total number of cases since the coronavirus was first detected in Vietnam a year ago stands at 1,705, including imported cases, with 35 deaths.

“To ensure our people’s health, it’s a must we have a COVID-19 vaccine in the first quarter,” Phuc said.

One of the first two cases recorded on Thursday was a factory worker exposed to an individual who had tested positive in Japan for the more contagious UK variant of the coronavirus. The ministry said it was analysing gene sequences to determine if the new patients had contracted the variant.

Most of the 2,340 workers at the factory in Hai Duong province had tested negative for the virus. Authorities will conduct mass testing in affected areas, deputy health minister Nguyen Truong Son said.

The health ministry said the case in Hanoi was linked to an airport worker in Quang Ninh province who tested positive on Thursday along with 83 others, the first locally transmitted cases for 55 days and Vietnam’s biggest single-day outbreak.

Early on Friday, authorities imposed a lockdown at a 27-floor apartment building in a central Hanoi district where the person who tested positive lives, state media reported. All residents in the block, home to hundreds of people, were asked to remain in their apartments.

Prime Minister Nguyen Xuan Phuc urged calm and promised swift action at an hastily called meeting on the sidelines of the congress on Thursday, when the wearing of masks at the gathering was made mandatory.

Against a backdrop of a buoyant economy, bolstered by largely keeping coronavirus cases in check, the congress will select Vietnam’s leadership and shape policy for the next five years and beyond.

Congress delegates were tested for the virus at their hotels on Thursday, state media reported. Anti-virus measures were also stepped up at the congress venue on Friday: all support staff and media in attendance underwent another round of testing – the third for those involved since the run-up to the event began.

The health ministry had previously said it conducted 10,000 tests in association with the congress, all of which were negative.

At an urgent meeting on Thursday night, Hanoi authorities said they were ramping up tracking and testing capabilities, adding that the city could conduct 10,000 tests a day.

State television quoted the coronavirus task-force chief as saying preparations should be made for up to 30,000 COVID-19 cases.

The health ministry has proposed halting international flights and banning large gatherings ahead of the Lunar New Year holiday, just two weeks away. The government late on Thursday said three field hospitals had been built in Hai Duong province.