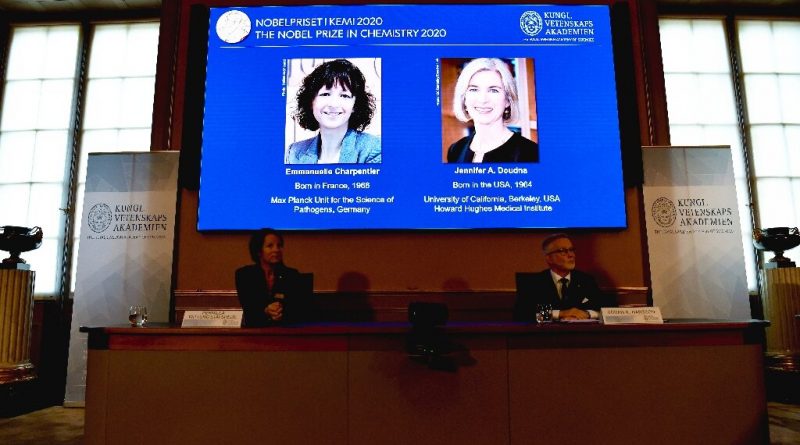 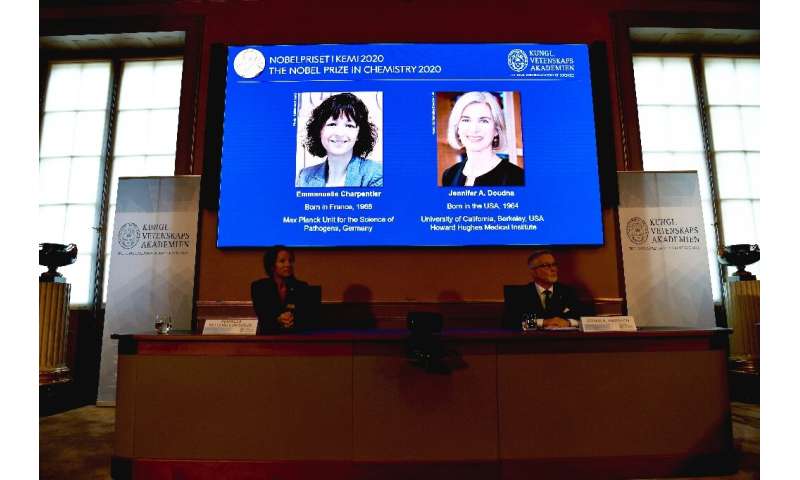 Emmanuelle Charpentier of France and Jennifer Doudna of the US on Wednesday won the Nobel Chemistry Prize for the gene-editing technique known as the CRISPR-Cas9 DNA snipping “scissors”, the first time a Nobel science prize has gone to a women-only team.

“Using these, researchers can change the DNA of animals, plants and microorganisms with extremely high precision,” the Nobel jury said.

“This technology has had a revolutionary impact on the life sciences, is contributing to new cancer therapies and may make the dream of curing inherited diseases come true.”

The technique has been tipped for a Nobel nod several times in the past, but speaking to reporters in Stockholm via telephone link Charpentier said the call was still a surprise.

“Strangely enough I was told a number of times (it might happen) but when it happens you are very surprised and you feel that it’s not real,” she said.

“But obviously it is real so I have to get used to it now,” she added.

Charpentier, 51, and Doudna, 56, are just the sixth and seventh women to receive the Nobel Prize in Chemistry, and this is the first time a Nobel science prize goes to a women-only team.

Charpentier told reporters she considered herself “a scientist” first, but hoped the prize would provide “a really strong message for young girls”.

Rewriting ‘the code of life’

While researching a common harmful bacteria, Charpentier discovered a previously unknown molecule—part of the bacteria’s ancient immune system that disarms viruses by snipping off parts of their DNA.

After publishing her research in 2011, Charpentier worked with Doudna to recreate the bacteria’s genetic scissors, simplifying the tool so it was easier to use and apply to other genetic material.

They then reprogrammed the scissors to cut any DNA molecule at a predetermined site—paving the way for scientists to rewrite the code of life where the DNA is snipped.

The CRISPR/Cas9 tool has already contributed to significant gains in crop resilience, altering their genetic code to better withstand drought and pests.

The technology has also led to innovative cancer treatments, and many experts hope it could one day make inherited diseases curable through gene manipulation.

“There is enormous power in this genetic tool, which affects us all. It has not only revolutionised basic science, but also resulted in innovative crops and will lead to ground-breaking new medical treatments,” Claes Gustafsson, chair of the Nobel Committee for Chemistry, said in a statement.

Born in France, Emmanuelle Charpentier currently works as the director of the Max Planck Unit for the Science of Pathogens in Berlin, Germany.

Doudna, who was born in the US, is a Professor of Biochemistry at the University of California.

“Only imagination sets the limit for what this chemical tool, that’s too small to be visible to our eyes, can be used for in the future,” Pernilla Wittung Stafshede from the Nobel Committee told a press conference.

The professor of chemical biology also noted that it had been widely adopted even though it had only been around for eight years.

CRISPR’s relative simplicity has however triggered the imaginations of rogue practitioners.

In 2018 in China, scientist He Jiankui triggered an international scandal—and his excommunication from the scientific community—when he used CRISPR to create what he called the first gene-edited humans.

The biophysicist said he had altered the DNA of human embryos that became twin girls Lulu and Nana.

His goal was to create a mutation that would prevent the girls from contracting HIV, even though there was no specific reason to put them through the process.

The first time a woman was honoured with the chemistry prize was in 1911 when Marie Curie, who also took the physics prize in 1903, won after discovering the elements radium and polonium.

They would normally receive their Nobel from King Carl XVI Gustaf at a formal ceremony in Stockholm on December 10, the anniversary of the 1896 death of scientist Alfred Nobel who created the prizes in his last will and testament.