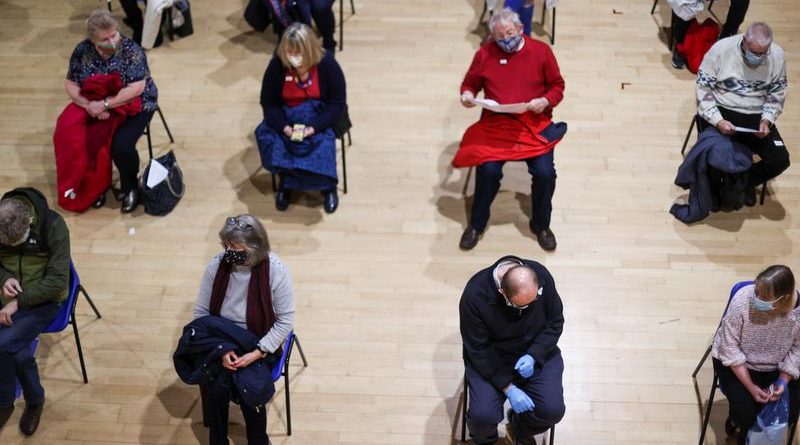 LONDON (Reuters) – Britain is on course to hit a target of offering a first vaccine dose against COVID-19 to its 15 million most vulnerable citizens by Monday, increasing pressure on the government to start reopening schools and loosening far-reaching lockdown measures.

Britain’s vaccination programme has so far reached more than 14.5 million people and is seen as one of few successes in the government’s handling of a pandemic in which the country has suffered a higher death toll and worse economic damage than its peers. The UK’s total population is about 67 million.

After becoming the first in the world to approve a vaccine, the government set an ambitious target to reach care home residents and staff, frontline health and care workers, all those aged 70 or over and the clinically extremely vulnerable.

Latest vaccination data is due around 1600 GMT.

Foreign minister Dominic Raab said he was confident the government would hit the vaccination target, but said it was too soon yet to discuss when restrictions could be lifted.

“We share all of the ambition and the desire to get out of this lockdown, we want to do it responsibly and safely and therefore it’s got to be based on the evidence,” he told Times Radio.

Raab was responding to a letter from 63 lawmakers from the ruling Conservative Party which demanded that all lockdown measures be lifted by the end of April.

That is the date by which the government wants to have vaccinated the cohorts that have so far accounted for 99% of all deaths – an estimated 32 million people.

“Once all nine priority groups have been protected by the end of April, there is no justification for any legislative restrictions to remain,” the letter organised by the Covid Recovery Group said.

Prime Minister Boris Johnson will set out on Feb. 22 the government’s plans to end the lockdown, and has said he wants schools to reopen on March 8.