A build-up of a protein in the brain may not be the first sign of Alzheimer’s, contrary to popular belief.

Experts have long thought the accumulation of beta-amyloid was the initial hallmark of the memory-robbing disorder.

But a new study has found subtle cognitive problems occur before and at the same time as the clumps of plaque clog up the brain.

Researchers discovered patients with memory problems experienced a more rapid build-up of proteins compared to those who maintained their cognitive skills.

Scientists at the VA San Diego Healthcare System say a build-up of another protein, called tau, may be the first sign of the disease. 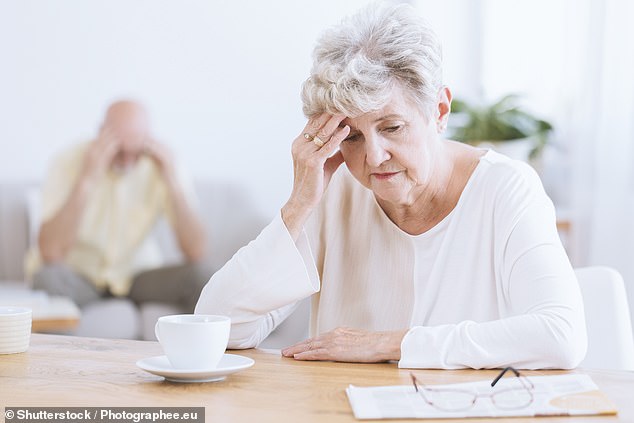 Memory problems may occur in people with Alzheimer’s long before  a toxic accumulation of proteins in the brain, researchers have found (stock)

Tau is known to form tangles in the areas of the brain important for memory and then move through the organ as symptoms progress.

In their latest study, the team of scientists analysed 747 people with an average age of 72 over four years.

They performed brain scans at the start of the study and once every following year to determine levels of amyloid plaque.

Volunteers took part in memory and thinking tests on the same occasions, which were cross-referenced with their scan results.

At the end of the study researchers divided participants into three groups, including 305 people with normal thinking and memory skills.

Some 153 had subtle thinking and memory differences and 289 people showed mild cognitive impairment.

People with thinking and memory differences went on to experience a more rapid accumulation of the toxic protein, results showed.

This remained true even after adjusting for age, education, sex, genetic Alzheimer’s risk, and amyloid level at the start of the study.

These volunteers also had faster thinning of the entorhinal cortex, a brain region that is impacted early in the course of the disease.

‘These participants had faster amyloid accumulation on brain scans over time, suggesting that amyloid may not necessarily come first in the Alzheimer’s disease process.

‘Much of the research exploring possible treatments for Alzheimer’s disease has focused on targeting amyloid.

‘But based on our findings, perhaps that focus needs to shift to other possible targets.’

Currently, there are only five Alzheimer’s drugs approved by the US Food and Drug Administration (FDA).

But the medications can only treat the symptoms of the disease, not the cause – which remains unknown to scientists.

Two drugs which remove excess amyloid, gantenerumab and solanezumab, are currently being trialled.

But Dr Thomas, whose findings were published in the journal Neurology, believes research efforts should be targeted elsewhere.

She added: ‘From prior research, we know that another biomarker of Alzheimer’s disease, a protein called tau, shows a consistent relationship with thinking and memory symptoms.

‘Therefore, more research is needed to determine if tau is already present in the brain when subtle thinking and memory differences begin to appear.’

A limitation of the study was that participants were mostly white and considered healthy, so the results may not be the same for other populations.

The researchers said they have not ruled out the possibility that MRI and CT scans are not accurate enough to pick up early stages of the toxic build-up of amyloids.

More than 5million people suffer from Alzheimer’s in the US, where it is the sixth leading cause of death. Over 1million Britons have the disorder.

Alzheimer’s disease is a progressive, degenerative disease of the brain, in which build-up of abnormal proteins causes nerve cells to die.

This disrupts the transmitters that carry messages, and causes the brain to shrink.

More than 5 million people suffer from the disease in the US, where it is the 6th leading cause of death, and more than 1 million Britons have it.

As brain cells die, the functions they provide are lost.

That includes memory, orientation and the ability to think and reason.

The progress of the disease is slow and gradual.

On average, patients live five to seven years after diagnosis, but some may live for ten to 15 years.