Home » Health News » There was a crooked man: Scoliosis and the deep history of the brain’s inner sanctum 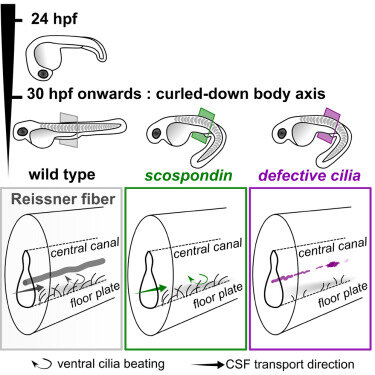 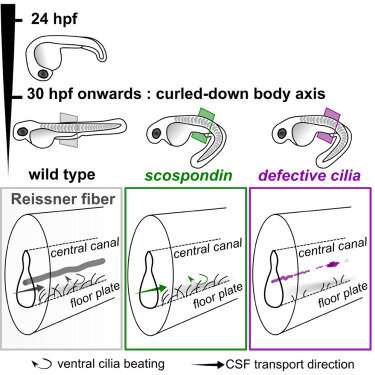 Lurking just beneath the surface of just about every common nursery rhyme is a complex record of times long gone. For example, the “crooked man” who “laid a crooked sixpence upon a crooked style” was none other than the great 17th-century Scot General Sir Alexander Leslie. The crooked stile was the uneasy border between Scotland and England established by the controversial covenant he signed. Quite similarly, many enigmatic structures that permanently persist or otherwise transiently appear and resorb in the development of the nervous systems of many creatures also encode a rich evolutionary past.

One such functioning relic is Reissner’s fiber, a glycoprotein sheet secreted by the subcommissural organ (SCO) that inexorably treadmills down the central canal of the spinal cord. Although the SCO was one of the first structures of the mammalian brain to differentiate, in humans, it begins regressing around age three or four and typically becomes vestigial by adulthood. The main component of Reissner’s fiber is a giant 5000-amino-acid vertebrate molecule called SCO-spondin. This protein contains axonal pathfinding domains critical to development of the posterior commissure, a transhemispheric highway that bears axons controlling the pupillary light reflex.

The other product of the SCO is a thyroid-hormone-transporting protein called transthyretin. Much like all the organified metals fixed by life, iodine has a unique story to tell in the evolution of the body plan. Recently, an intriguing connection between Reissner’s fiber and development of the spine that houses it has been discovered in the model organism, zebrafish. These fish, as recently observed for the serotonergic control of neurogenesis, have proven to be an exemplary model for studying all things neural. In the latest issue of Current Biology, author Nathalie Jurisch-Yaksi reviews a remarkable confluence of ideas that establish an indisputable role for Reissner’s membrane building a straight and strong spine.

In humans, curvature of the spine most frequently presents as late-onset idiopathic scoliosis. Curiously, this condition most noticeably asserts itself at the onset of puberty. It often results from myriad underlying conditions, but the exact genetic basis of these conditions is not fully understood. Typically, a pronounced side-to-side curvature is also accompanied by a front-to-back curvature, and often a significant rotational component.

Jurisch-Yaksi is an expert in the delicate ciliated cells that line the interior surfaces of the brain. While there are alleged markers for motile cilia, like FoxJ1, in reality, there appear to be several important exceptions to the rule. Studies done long ago have suggested that the cerebral-spinal-fluid-contacting dendritic terminals of central canal cells have many stereocilia and posses a 9 x 2 + 2 kinocilium that is contact with Reissner’s membrane. In addition to a presumed role in organizing the right-left axis of the body, orderly arrays of intact, motile cilia have long been thought to be essential to compacting and organizing a proper Reissner’s fiber.

Notably, this kind of glycoprotein membrane and supporting stereocilia is exactly the structure of the inner ear hardware that detects sounds down to the lowest threshold of thermal noise. Unfortunately, the idea of Reissner’s membrane as some kind of supersensory organ has so far been given little experimental credence. Interestingly, the discoverer of Reissner’s fiber, Ernst Reissner, also first described the canonical Reissner’s membrane in the organ of Corti.

While this particular membrane is composed of two layers of flattened cellulated epithelium separated by a thin basal lamina, the nearby tectorial membrane suspended by the cilia of hair cells that transduce sound into the brain is actually more reminiscent of a miniature Reissner membrane. This tectorial membrane is not composed of SCO-spondin, but rather approximately 50% collagen, with the remainder being a composition of the three inner-ear-specific glycoproteins, α-tectorin, β-tectorin and otogelin.

Two of the papers highlighted in Jurisch-Yaksi’s review were also recently published in Current Biology. The first, by Troutwine et.al., showed that zebrafish with a compromised Reissner’s membrane invariably develop full-blown scoliosis. In particular, they discovered two recessive missense alleles of the SCO-spondin gene that both disrupt evolutionarily conserved cysteine residues at independent regions of the protein. Furthermore, they were able to visualize the continuous rostral-to-caudate flow of the fiber using a SCO-spondin-GFP fusion protein.

In the second paper, Rose et. al. demonstrate that zebrafish SCO-spondin mutants develop late-onset idiopathic spinal curvatures in the absence of the usual cilia motility defects that have typically characterized the condition. What is particularly interesting in this paper is that the authors linked spinal curvature to neuroimmune and other specific inflammatory processes. One thing that has been shown elsewhere is that tail resorption during amphibian metamorphosis is controlled by both the immune system and programmed cell death triggered by thyroid hormone.

In a recent post this week, we discussed Detlev Arendt’s review of the multicellular adherence junctions as a prelude to the origin of the synapse. One thing Detlev had previously established is the role of the so-called mucociliary sole in the transition from single-celled internal phagocytosis to a multicellular-style external feeding. Rather intriguingly, he notes that the propagation by motile cilia of this mucoid food-capturing and creeping locomotory structure also neatly explains the origin of Reissner’s fiber. To carry this idea a little further, it is useful to expand on the role of

iodinated proteins that are incorporated into feeding mucoproteins in the endostyle of organisms like amphioxus, which represent extant evolutionary critical points in the story of life.

Susan Crockford, a celebrated voice on all things climate change, has become well-known for debunking the emaciated, cliff-hanging polar bear hoax perpetrated on international television by the likes of David Attenborough. In addition to being the foremost authority on the health of polar bear populations, she has also uncovered a hitherto unknown function of iodine in the origin of multicellular life. Crockford notes that primitive living vertebrates, like jawfish and lamprey, retain an endostyle (the evolutionary precursor to the thyroid gland) during their freshwater larval stage that produces iodinated tyrosines used to initiate metamorphosis into the adult marine form. Thereafter, the endostyle transitions into a more modern thyroid gland complete with prototypical follicles.

Thyroid hormone is now used to effect all kinds of change in many organisms. For example, flatfish (like flounder) employ its body-morphing services to physically translate one eyeball over their heads to the opposite side as they rotate their swimming style from vertical to horizontal. While these kinds of attitude adjustments are more recently evolved, a much deeper kind of whole-body rotation is now believed to underlie the transition to higher forms of life. While some details still need to be fleshed out, the basic concepts of this axial twist theory have now been established by Marc de Lussanet.

In a nutshell, the theory aims to rectify a glaring existential problem in our present understanding of evolution—namely, the fact that the invertebrate nervous system lies on the dorsal side, whereas in protostomes, it lies ventrally. According to the now outdated dorsoventral inversion hypothesis, one day, an ancestral deuterostome simply turned on its back. A refinement of this idea was the somatic twist hypothesis, which offered that just the ″somatic″ part, i.e., everything behind the eyes, mouth and nostrils, including the forebrain, turned on its back. Unfortunately, these ideas failed to explain the many puzzling challenges that the major commissures, decussations and chiasma of modern nervous systems present to the theorist.

In the axial twist theory, the developing embryo first makes a significant early turn onto its left. In other words, the left side is essentially turned toward the yolk with the right being turned away. Later during development, the anterior head and forebrain begin to make a further turn to left while the body instead reverses and makes a compensatory twist to the right. These movements explain many observations from many kinds of embryos, including the direction of the whirl in the early primitive streak in birds, the relative turning of the heart and the soma, and the asymmetric growth of the eyes and posterior head region in zebrafish.

For animals like teleosts or chameleons that lack a merged optic chiasm, the fact that the left-eye tract passes above the right-eye tract in the chiasm becomes a no-brainer for the axial twist theory; its a clear left-handed twist. I asked Marc de Lussanet recently about any other possible examples, and he quickly responded with numerous anecdotes of twisting developmental asymmetry from mussels, lancelets, and tunicates, to name just a few, that simply astounded. The theory also neatly accounts for the contralateral organization of our forebrains. In addition, the well-documented phenomenon in which the right frontal lobe of humans generally protrudes ahead of the left (known as the Yakovlevian torque) may simply represent an incomplete turning of the cerebrum in the embryo. In light of some of these broader observations, the tendency toward scoliosis might be viewed as part of a larger continuum of variation that is going on behind the scenes.