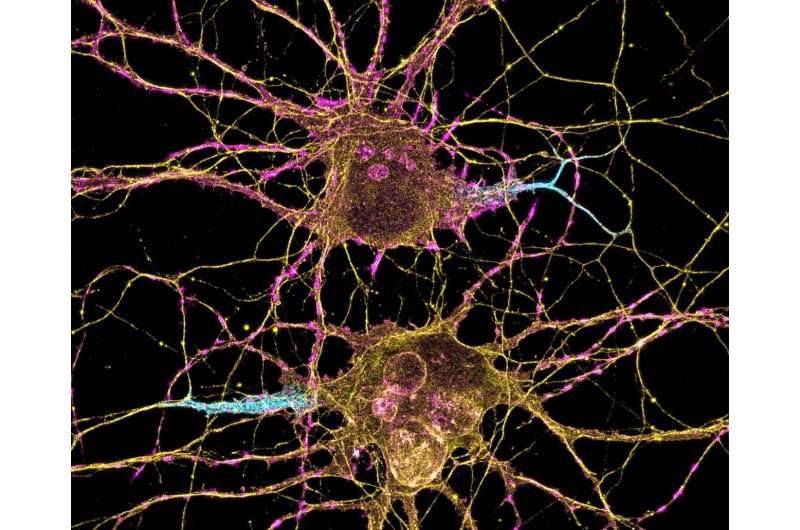 Part of understanding the underlying causes of autism spectrum disorder relies on figuring out which cells’ signaling patterns in the brain are disrupted, and when during nervous system development the disruption occurs.

New research findings in mouse models of one genetic risk for autism support the idea that loss of a specific gene interferes with cells in the brain whose role is to inhibit signaling. Though there are fewer of these cells than other neurons and their signals don’t travel very far, they have enormous influence on patterns of information transmission within the brain and to the rest of the body.

Ohio State University researchers have found that deleting a copy of the autism-risk gene Arid1b from specific brain cells decreased the number of inhibitory cells and lowered signaling between inhibitory cells and the excitatory cells they help control. Previous research has suggested reduced inhibitory signals in mouse models of the disorder result in a range of autism-related behaviors.

In separate experiments, the scientists found that signaling changes linked to inhibitory cells can be seen in the same genetic mouse models of autism spectrum disorder (ASD) very shortly after birth, but the disruption might not be strong enough to interfere with normal brain development powered by a host of other genes.

Studying disease risk genes’ effects on brain circuitry is intended to pave the way to possible therapies, but this pursuit also offers insights into how normal circuits function because “in many cases, that’s still a mystery,” said senior author Jason Wester, assistant professor of neuroscience in Ohio State’s College of Medicine.

The research posters were presented today (Monday, Nov. 14, 2022) at Neuroscience 2022, the annual meeting of the Society for Neuroscience.

There are many genes associated with risk for ASD, which is among the reasons it is such a difficult disorder to study and treat. In fact, in a recent data-mining RNA sequencing study published in Frontiers in Neural Circuits, Wester’s lab created the first organized list of genes that relate to formation of synapses—vehicles for circuit transmission among cells—across the brain.

“We hoped to provide clues for whether or not we might consider therapies for autism that could be fixable across the whole brain if we tweaked a single gene,” he said. “Unfortunately, we found it’s not likely. Autism risk genes are not concentrated in a specific group. But we did find many among inhibitory neurons, suggesting they are potentially key targets for therapeutics.”

Wester deleted one copy of the Arid1b gene in specific brain cells in mice—rather than throughout the body in the way natural gene loss would occur—to examine where circuit changes go wrong in ways that could lead to symptoms associated with autism, such as problems with social communication, repetitive behaviors, learning deficits or anxiety.

“We knock out the gene in a subpopulation of cells to investigate their contributions to circuit abnormalities, and look at changes in synaptic properties during development over time and compare them to control mice,” he said.

Loss of the gene in inhibitory neurons, however, led to changes in synaptic physiological functions and connectivity at varying levels depending on their location in the cortex.

The team also monitored hippocampus activity in the brains of 1-week-old mice lacking a copy of the Arid1b gene in brain cells to see if genetic problems affected circuitry at that very early stage. They found some delays in synapse development and lower frequency of information transmission involving inhibitory neurons, but normal hippocampal development appeared to occur despite those changes. Though it’s too soon to tell, this finding could have implications for potential timing of interventions related to repairing damaged circuity, Wester said.

Precision in understanding brain circuitry is vital to the design of therapies to address ASD.

“Our data indicate that in some cases, circuits between excitatory and inhibitory cells seem normal, but circuits right next to them consisting of slightly different subtypes of neurons are the ones that are disrupted—so if you dial up inhibition everywhere and dial it up in the wrong places, you could introduce a whole new host of problems,” he said.

“That’s why what we’re doing is valuable, because it can tell us where to target interventions and open up new avenues for therapies.”