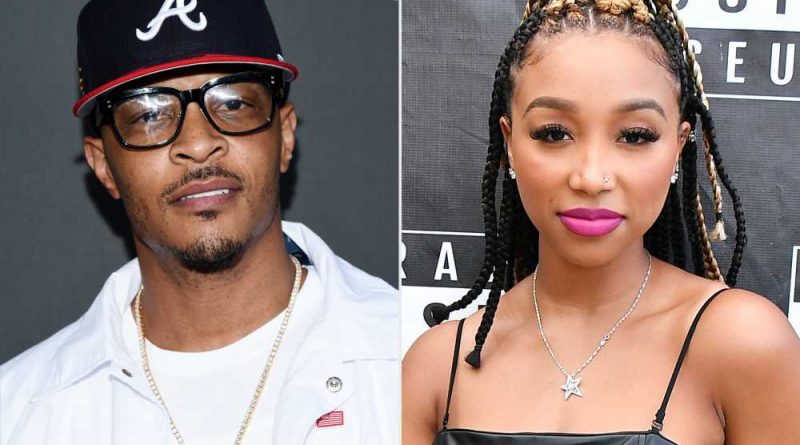 Zonnique Pullins is giving an update on her stepdad T.I. after the controversial comments he made last year about going to his teenage daughter Deyjah Harris' gynecologist appointments to check the status of her virginity.

The daughter of Tameka "Tiny" Harris, who's currently expecting her first child, opened up to Entertainment Tonight recently about how the "big moment" changed their family dynamic and made T.I., 40, take a step back and reevaluate his approach to his daughters.

"He's definitely just been learning with the girls on how to handle certain things and how to go about certain things when it comes to us," says Pullins, 24. "I feel like it's a lot of stuff he didn't realize when it comes to a young girl's feelings. So I feel like now he's a little bit more careful. He just goes about everything a little bit differently now, definitely. … He's more sensitive with everything."

Speaking to the relationship between T.I. and 19-year-old Deyjah nowadays, Pullins tells ET that the two have learned about "each other a lot more since" T.I. made his initial comments last fall.

"Their relationship has gotten better and they've both grown. … He's not overbearing in certain situations. … He's changed when it comes to Deyjah," she says. "Their relationship is in a really good place, actually. It took a minute for them to get to this place, but I feel like they're just doing really good." T.I.'s Daughter Deyjah Harris Speaks Out About Having a Mental Illness: "It Hasn't Gotten Easier"

Deyjah opened up back in June during an episode of T.I. & Tiny: Friends and Family Hustle about how it felt to hear, while she was on vacation, her father discuss making "yearly trips to the gynecologist" in order to check that her hymen was still intact.

"Things are completely uncomfortable for me right now," she said in a confessional. "We're all together in this house, so I have to see my dad and be around him. And we're in a foreign country so it's not like I can leave and get away."

Adding that T.I. (who apologized to his daughters for "any and all perfections" on his end in the wake of Kobe Bryant's death this past January) had been going with her to the gynecologist "since I was 14 or 15," Deyjah said that she "couldn't have said no" to his coming with her.

"I told a joke that was laced in truth, also [with] a lot of major embellishments," the rapper said in a confessional. "I was speaking past tense. People thought I was speaking present day."

just waiting on my ass to get bigger🥴

"I need more time to figure out what I want to say, but things are completely awkward and uncomfortable between me and my dad," Deyjah told her cousins, getting emotional. "Prior to all of this happening, our relationship was pretty decent, but after all of this, it's changed, honestly."

As for Pullins, The Mix star is focused on getting ready to welcome her daughter into the world alongside her boyfriend, rapper Bandhunta Izzy, and family — who all couldn't be more excited, despite some initial shock.

"I definitely expected his reaction to be a lot like how it was… I didn't expect him to be extremely happy and like, 'Oh my God! Congratulations!' because I know how he is," she tells ET. "He's a Libra. He doesn't really play … I was pretty happy to share that moment with the world; me telling him and telling the world all at the same time was pretty hilarious to me."

"I think [Tiny and T.I.] are definitely getting into the whole [idea] of [the pregnancy]," she adds. "My mom has definitely been settling into becoming a grandma for a while now. … My pops, I feel like he's just now kind of settling into it the last couple months. Like, when he sees me, he's like, 'Oh, let's see, you're getting bigger.' "