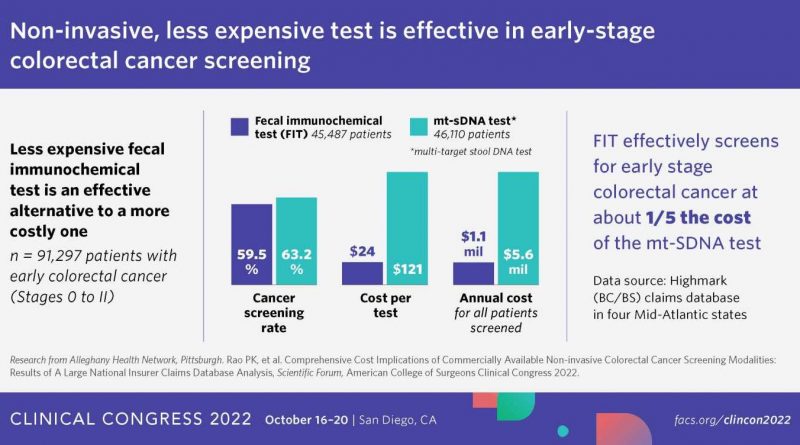 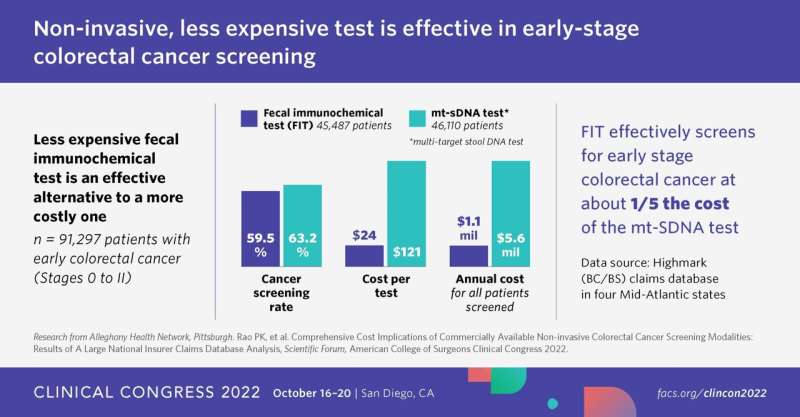 Commercially available noninvasive screening tests for colorectal cancer—a fecal immunochemical test (FIT) and the multi-target stool DNAtest (mt-sDNA; or Cologuard®)—are equally effective for screening patients with early-stage colorectal cancer. However, a FIT costs about one-fifth of the multi-target DNA test, according to new study results presented at the Scientific Forum of the American College of Surgeons (ACS) Clinical Congress 2022.

From that group, the researchers identified 91,297 people who had noninvasive screening with either the fecal immunochemical test (FIT, n=45,487) or the DNA test (mt-sDNA, n=46,110) instead of having a routine colonoscopy.

The study followed guidelines issued by the U.S. Preventive Services Task Force (USPSTF) in 2016 and updated in 2019. Since then, the guidelines were updated again in 2021.

“Despite national guidelines suggesting that FIT be used as the primary noninvasive screening modality, we found that on review of our insurer’s claims data, a significant proportion of patients still receive a more expensive alternative test. There is substantial cost savings not only to our patients but to our health system with promoting appropriate use of noninvasive testing,” Dr. Rao said.

He added, “When you look at the national data for which the guidelines put forward, they found no difference between the two tests at detecting adenoma versus colorectal malignancy.”

The researchers determined that transitioning all noninvasive colorectal cancer screening to FIT would result in a $3.9 million savings annually in the study population.

“In the current state of healthcare, we are thinking ever more about efficiency and reduction in costs while maintaining patient outcomes, and not compromising the quality of care we provide,” Dr. Rao said. “I think a colorectal surgeon or any specialist who sees appropriate patients for colorectal cancer screening can use this data to provide recommendations of alternative screening tests to patients who primarily do not want to undergo colonoscopy. We cannot only say it is appropriate from a guideline standpoint, but we’re also reducing wasteful spending in health care by appropriately using the FIT.”

What makes this study unique is the methodology used to analyze the claims data, said study coauthor Casey J. Allen, MD, a surgical oncologist at Allegheny Health Network and an assistant professor at Drexel University College of Medicine, Pittsburgh. The researchers analyzed outcomes in the local health registry and then applied those outcomes to the claims database. “It’s not just the cost of the mt-sDNA test kit or the cost of the FIT kit multiplied by the number of members in the healthcare system,” Dr. Allen said. “It’s the full downstream costs depending on the rates of false-positive and false-negative tests and how much it costs to obtain a colonoscopy when that occurs. The cost of a screening colonoscopy in the database the researchers used was $635.