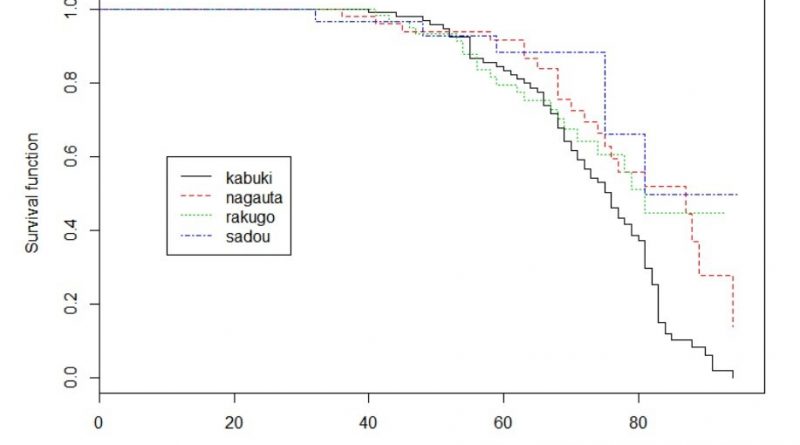 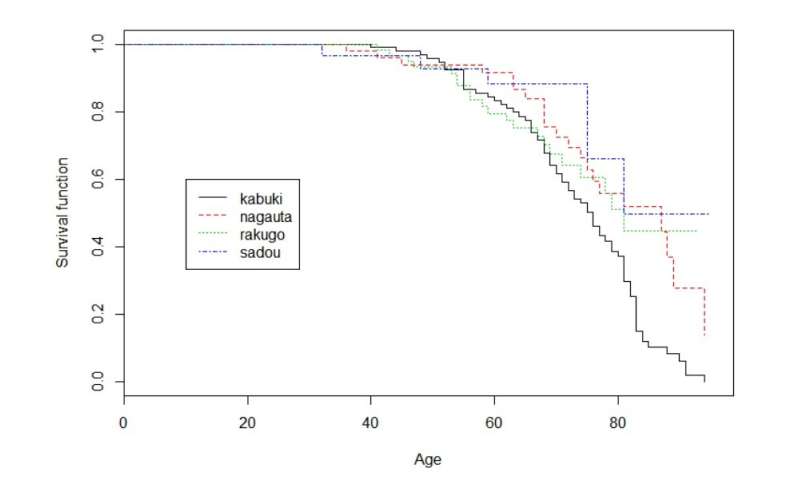 By analyzing longevity data for professional Japanese traditional artists, researchers at Tokyo Institute of Technology (Tokyo Tech) have found that kabuki actors, known for their vigorous movements, surprisingly had shorter lifespans compared with other traditional arts performers who lead mostly sedentary lifestyles. The findings suggest that job-related strenuous exercise throughout life may not necessarily extend longevity.

Frequent exercise is often touted as key to leading a long and healthy life. But few studies have delved into comparisons in longevity between those who partake in vigorous physical activity and those who lead mostly sedentary lifestyles as a result of their occupation throughout their lives.

Now, Naoyuki Hayashi and Kazuhiro Kezuka of Tokyo Tech’s Institute of Liberal Arts have conducted an unusual study that calls into question the idea that vigorous daily exercise positively correlates with longevity.

They compared the lifespans of four groups of Japanese traditional arts performers by examining data from a total of 699 professional male artists, both living and dead, whose birth and death records are all publicly available. They hypothesized that kabuki actors would lead longer lives owing to the high-level physical activity involved in their theatrical performances, compared with Sado, Rakugo and Nagauta practitioners, who are known to perform tea ceremonies, recount comic stories and play musical instruments while sitting, respectively.

Using a method called Kaplan-Meier analysis, they found that contrary to expectations, the lifespan of kabuki actors was shorter than that of the other three types of traditional artists.

The researchers postulate that one reason for the shorter lifespans of kabuki artists could be that excessive endurance training and physical activity overwhelms the beneficial aspects of regular physical exercise. Another reason might be that in the past, kabuki actors have often worn oshiroi (white powder used for make-up) containing lead, which carries a significant health risk. The use of oshiroi was only banned in Japan in 1934.

The researchers point out their study is not without limitations. For example, the data examined male-dominated professions only, and therefore does not give a portrayal of population-wide longevity including females.

Further work would be needed to evaluate the optimal amount of exercise for protecting health. The possibly beneficial effects of “non-exercise” activities such as speaking, singing and playing musical instruments would also need further exploration.