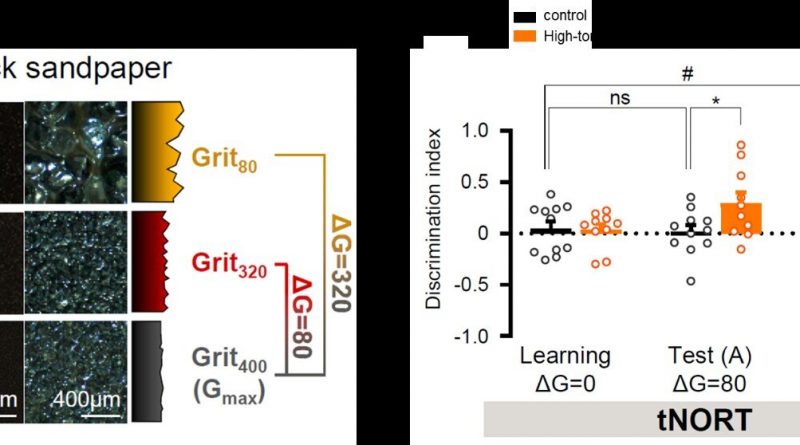 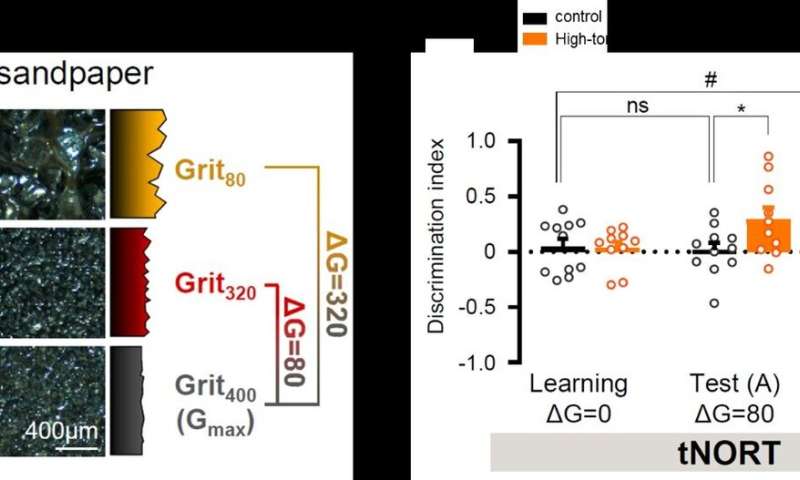 Parents might be familiar with their toddlers making a mess with flour. Feeling the soft texture of flour, kids can create, explore and learn through the messy play. Such tactile sensory play is an effective stimulus for children’s senses as the tactile system includes the network of the skin. The thalamus in the brain is where general sensory inputs are filtered, yet it has remained elusive as to what specific mechanism fine-tunes the sense of touch.

Led by Dr. C. Justin Lee at the Center for Cognition and Sociality within the Institute for Basic Science (IBS) in Daejeon, South Korea, and Dr. Cheong Eunji at Yonsei University, the joint research team has revealed the production pathway for the sense of touch. They found that the persistent regulation (tonic) of γ-aminobutyric acid (GABA), which is the main inhibitory transmitter in astrocytes (star-shaped cells), generates the sense of touch.

“Contrary to the conventional assumption, thalamic astrocytes were found to synthesize GABA using an enzyme called diamine oxidase (DAO), rather than MAOB, previously known as a GABA-producing enzyme in cerebellar astrocytes,” says Koh Wuhyun, first author of the study. The research team also found that the production of GABA is completed by an enzyme called Aldh1a1. The team confirmed that the GABA produced is released through Best1 channel in astrocytes. They also experimentally proved that astrocytic tonic GABA in the thalamus controls our brain’s acuity to make sense of touch.

The study reports a rather surprising finding as to how GABA works to control the tactile sense. GABA, known for its inhibitory function, actually enhances sensory input processing by accelerating the signal processing and sharpening the sensitivity of signal magnitude. “The brain cannot accurately distinguish saturated neuronal signals. It is like how too much exposure to light results in an overly bright photo. GABA’s inhibitory action removes extreme values of signals and accentuates the information of each signal. This fine-tuning helps neurons to be more sensible to various ranges of signals,” explains Koh. 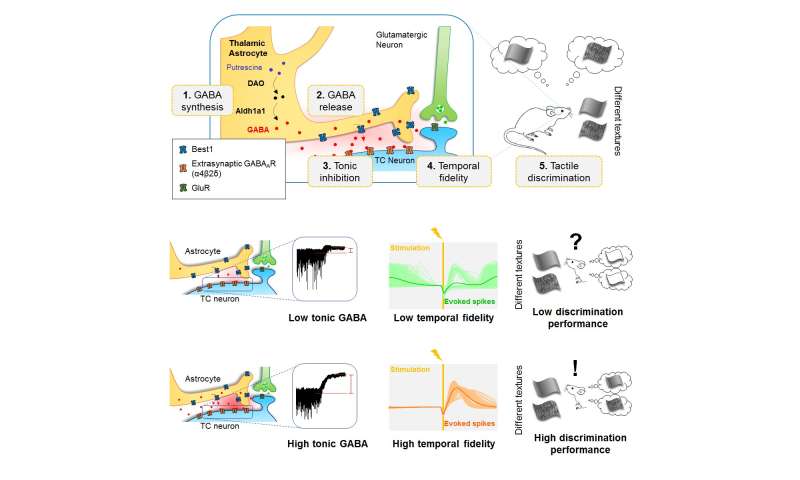 In behavioral experiments, the research team verified that tonic GABA dynamically controls tactile discrimination. They used sandpaper with various grits; the smaller the grit number, the more coarse the particles; the larger the number, the more fine. This tactile-based novel object recognition test showed that astrocytic knockdown models of Best1, DAO, and Aldh1a1 reported a significantly lower discrimination ability compared to the control group. The team also confirmed the effect of enhancement of tonic GABA: Overly-charged models demonstrated a greatly enhanced ability of discrimination. They were able to recognize relatively small changes of tactile sensation.

Co-corresponding author, Dr. Cheong Eunji states, “Detecting a small change of the surroundings marks the beginning of our cognitive function. This study uncovered a novel mechanism of manipulating sensory acuity, offering a breakthrough for the study of sensory and cognitive functions.”