Male infertility accounts for about half of the problem when a couple struggles to conceive – but far less is known about the DNA that drives men’s reproductive problems than is about women’s.

Their research is the first report of this genetic driver of infertility, and could open the door to a new diagnostic test and to previously impossible treatments. 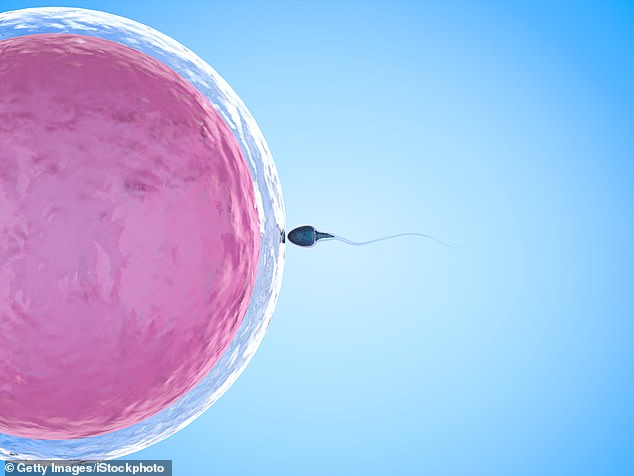 About seven percent of men are estimated to be infertile.

Though the DNA has not all been identified yet, doctors speculate that some 2,000 genes are involved in the production of sperm in the body.

A patient who was struggling with fertility issues was referred to Dr Samantha Schilit and Dr Cynthia Morton.

For two years, they worked with and studied the patient, and for those two years he was consistently infertile and had low sperm count.

He was only 28 at the end of that time period.

So the researchers ran an analysis of the patient’s DNA.

They found that segments of the man’s DNA were arranged abnormally, specifically in the regions of chromosome 20 and 22.

SYCP2’s over-activity suggested to the scientists that that bit of genetic code might be throwing the whole sperm production process out of whack for the patient.

They re-simulated its activity and tested another three men with long-standing infertility for – and found – the same unusual arrangement and activity of SYCP2.

Deletions and incorrect bases in DNA are well known to cause all kind of birth defects and inherited diseases.

But most doctors don’t worry too much about the particular type of disarray seen in the patients.

Curiously, these DNA changes have been linked top one issue: a fertility one – in women.

‘Balanced chromosomal rearrangements in infertile men are rarely followed up beyond reporting a risk for segregation of unbalanced gametes, which can lead to recurrent miscarriage,’ said Dr Schilit.

‘This work shows that a chromosomal rearrangement may also disrupt or dysregulate genes important in fertility, and therefore should be considered.’

It’s too soon to tell if the gene could be the target of treatments for male infertility, but the team hope it will at least be added to genetic screening panels, so that these will be equipped for the first time to tell men about their reproductive health.

‘A diagnosis can be therapeutic in itself – even if there isn’t something that can be done to correct it,’ said Dr Morton.

‘It ends the search for the underlying issue and opens the door for enrolling in clinical trials.

‘And I believe there is good reason to be optimistic; we now have better tools for discovery and can begin on the path toward therapy.’