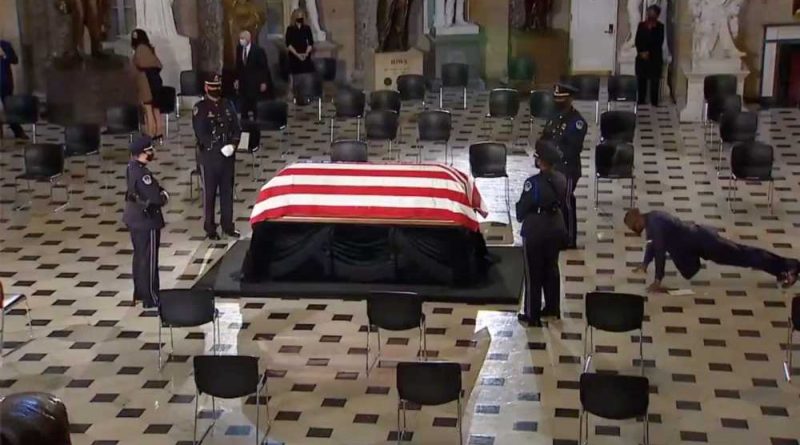 Ruth Bader Ginsburg’s personal trainer of more than 20 years paid tribute to the late justice in the best way he knew how — doing push-ups in front of her casket Friday.

In a video of the touching moment, trainer Bryant Johnson walks up to the casket before respectfully kneeling and doing a handful of push-ups for Ginsburg, who was well-known for the rigorous training regimen she kept, even while battling cancer.

Ginsburg's flag-draped casket is currently in the U.S. Capitol's Statuary Hall, where she became the first woman and first Jewish person in American history to lie in state. Ginsburg is among 38 people (12 of whom were U.S. Presidents) who have been given the honor since 1852, according to CNN.

Ginsburg died last Friday at the age of 87 from complications of metastatic cancer. She started working with Johnson — and logging her daily push-ups — in 1999, after going through treatment for colon cancer.

“I do 10, and then I breathe, and then I do 10 more,” Ginsburg said of her push-ups in 2016 while speaking at the Temple Emanu-El Skirball Center in New York City, according to Fortune. “I never thought I’d be able to do any of this,” she added. “I attribute my well-being to our meetings twice a week. It’s essential.”

Johnson published a book the following year about the Supreme Court Justice’s exercise regimen, titled, The RBG Workout: How She Stays Strong . . . and You Can Too!. At the 2016 event, he noted that despite her small size, Ginsburg did the real-deal push-ups – with her knees fully off the ground.

“Exercise is the great equalizer,” Johnson said. “It doesn’t matter what size, shape or color you are. A push-up is a push-up, no matter how you look at it.”