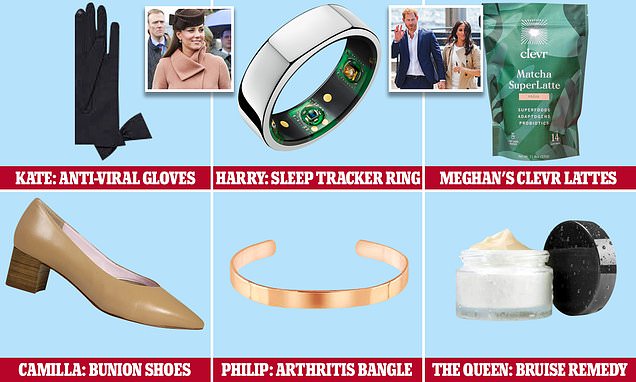 Both the Duchess of Cambridge and the Queen wear gloves from Cornelia James, some of which are made from fabric treated with an anti-microbial coating called HeiQ Viroblock 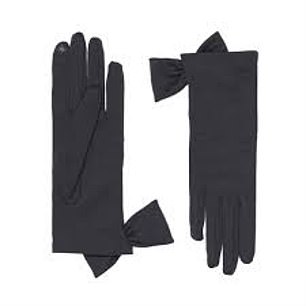 We all have our favourite products we rely on for our health needs — and the Royal Family is no exception.

The Duchess of Cornwall was recently spotted wearing special shoes that are designed to help bunions, and Prince Harry has worn a ring that tracks his sleep. But do the royal stand-bys work?

Helen Foster asked experts to assess some of the health products said to have the royal seal of approval.

Both the Duchess of Cambridge and the Queen wear gloves from Cornelia James, some of which are made from fabric treated with an anti-microbial coating called HeiQ Viroblock, which ‘uses a combination of silver and vesicle technology to promote the rapid breakdown of viruses and microbes on contact’.

It claims the technology has been shown by the Doherty Institute of Melbourne, Australia, to reduce the presence of the Covid-19 virus on fabric by 99.99 per cent within 30 minutes.

Expert verdict: ‘Wearing gloves creates a physical barrier to stop viruses getting on to the hands, but gloves still carry any germ you come into contact with and transmit it if you then touch your face,’ says Professor Martin Loessner, a microbiologist and specialist in microbial textiles at ETH Zurich in Switzerland.

‘This is why doctors dispose of their gloves regularly. The theory is that the antimicrobial coating [on these gloves] allows the surface to clean itself. The HeiQ uses a mix of a waxy ‘vesicle’ compound — which sticks to the virus, damaging its outer membrane — and silver, which inactivates it.

‘There are hundreds of studies that support the anti-microbial power of silver and many trials on the HeiQ technology used here. The recent study by the Doherty Institute, which looked at a polyester fabric treated with this technology, is particularly interesting.’ 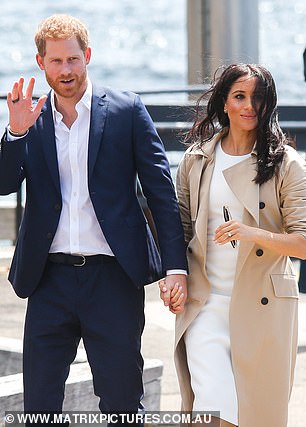 Prince Harry has been spotted wearing the Oura Ring, which has sensors that measure movement, heart rate and temperature, while the Duchess of Sussex is said to be a fan of Clevr’s lattes

Prince Harry has been spotted wearing the Oura Ring, which has sensors that measure movement, heart rate and temperature — and from this deduces how well you are sleeping.

The data is fed to a phone app and will help you to create an optimal ‘sleep schedule’.

Expert verdict: Dr Matthew Reid, a sleep researcher at the University of Oxford, says: ‘It can be easier to measure heart rate and temperature using a ring because its close contact with the skin is better maintained than with, say, a wrist-based tracker.

‘Research indicates that Oura may be as good as the gold standard sleep measurement [polysomnography, which measures brain activity using sensors taped to the body] at estimating how much time you spend asleep — but not quite as accurate at determining sleep stages, which tell you how restorative sleep might be. To measure these, we really need to look directly at brain waves.

‘This ring may be fine to get a general idea of how you are sleeping — but obsessing about sleep can lead to insomnia and there’s evidence to suggest trackers contribute to this.’ 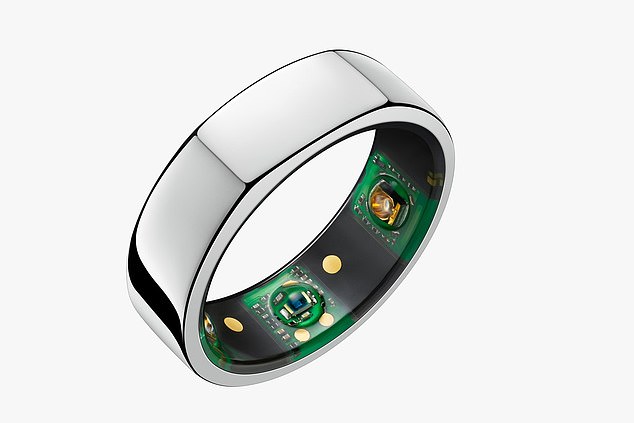 The ring (above) has sensors that measure movement, heart rate and temperature — and from this deduces how well you are sleeping 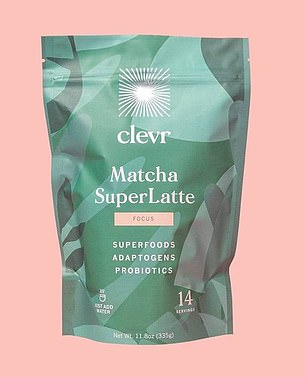 The drinks contain mushroom extracts, probiotics and 333mg of the adaptogenic herb ashwagandha

The Duchess of Sussex is said to be a fan of Clevr’s lattes — her neighbour Oprah Winfrey posted on Instagram that she’d been sent the drinks by her ‘neighbour M’, adding a crown emoji, and the next day Meghan confirmed she’d invested in the company.

The drinks, which contain mushroom extracts, probiotics and 333mg of the adaptogenic herb ashwagandha, are said ‘to promote steady, long-term energy without the crash or jitters’.

Expert verdict: ‘Adaptogens are a class of herbs that are said to provide energy and focus while helping to calm the body,’ says pharmacist Shabir Daya from Victoria Health.

‘They act rather like a thermostat to bring the body back into balance. Ashwag-andha is particularly revered in ayurvedic medicine and studies have suggested that taking it does help reduce levels of the stress hormone cortisol in the body.’

The Duchess of Cornwall has been spotted wearing special shoes that are designed to help bunions, a bony bump that forms on the joint at the base of your big toe. They have a wide fit and cushioning panel near the big toe ‘to comfort and support bunions and painful joints’.

They also have arch support and padding on the sole to stop the foot rolling inwards.

Expert verdict: ‘Bunions occur when pressure is put on the big toe, which causes the bones to move out of place,’ says Tariq Khan, a consultant podiatrist at University College London Hospitals NHS Trust.

‘Inflammation caused by pressure on the joint then encourages fluid to collect, which causes a bump to form. Bunions can be painful and aggravated by incorrect shoes, such as those with a narrow toe.

‘Good footwear for bunion sufferers is wide at the front, which reduces pressure on the big toe joint, and offers foot support to prevent the foot rolling inward and putting pressure on the toe — these shoes tick all the boxes.

‘Some styles in the range have a heel higher than 1.5 in, which is the highest we would recommend someone with bunions wears (any higher adds pressure on the bunions) but, overall, I think that they would reduce pain.’ 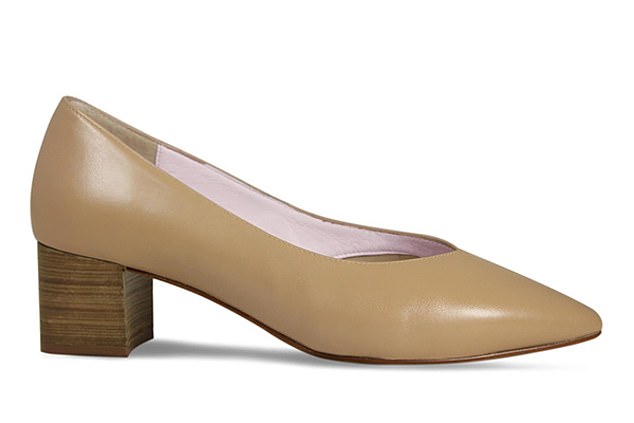 The Duchess of York is a member of Super-A, an online programme that claims to help members ‘become biologically younger than your actual age’.

It’s created by yoga instructor Wayne Lèal and trainer Josh Salzmann — both in their 60s — and uses a mix of yoga, rebounding (a cardio exercise done on a small trampoline) and resistance training videos, as well as recommending a diet to help ‘re-balance’ hunger, weight loss and mood hormones, it says.

The three-month programme ‘mirrors a study from University College London that states it takes 66 days to form a habit. Our tailored programme can help transform your body and mind to start you on a path towards better physical health and improved mental health.’

Expert verdict: ‘I think this blended approach is fabulous and I like that the trainers are older,’ says Sammy Margo, a physiotherapist in London.

‘Making yourself biologically younger is a bit of a claim, but we know that yoga can slow down the destruction of telomeres — the ends of the DNA strands in our cells that determine how fast we age — so it’s not completely implausible.

‘They also use resistance training, which is important for an older body to maintain muscle mass and muscle strength to reduce frailty. Rebounding can improve bone density and has been shown to improve balance and fear of falling in a 2019 study in the journal Clinical Interventions in Aging.

‘The downside is that there may be a greater risk of injury without a trainer, and you don’t have the peer pressure that might make you work harder that you get from an in-person class.’

He may be currently recovering from other health concerns but, in the past, the Duke of Edinburgh has been seen wearing a copper bangle (similar to this one) to help combat the effects of osteoarthritis in his wrist — wear and tear of the joint, thought to be the result of a polo injury.

Expert verdict: ‘While individuals have had experience of arthritis pain being eased by copper bracelets, there remains no evidence from studies that they work,’ says Dr Rod Hughes, a consultant rheumatologist at Ashford and St Peter’s Hospitals NHS Foundation Trust.

‘The belief is copper from the bangles may help nourish people — but arthritis is not caused by a shortage of copper, nor can copper from accessories be absorbed effectively through the skin.

‘However, the bracelets are safe to wear — plus, there’s the placebo effect in arthritis, where the belief that a treatment can help often translates into an observed benefit of 30 per cent improvement in pain and stiffness. This may be a good reason why some people do get relief from these remedies. You are better off spending your money on fish oils or a rosehip supplement, which do have evidence of helping arthritis.’

He may be currently recovering from other health concerns but, in the past, the Duke of Edinburgh has been seen wearing a copper bangle (similar to this one)

The Queen is reported to travel with a small case containing homeopathic remedies including arnica for bruising (the specific product she uses is unconfirmed, but Ainsworths is under Royal Warrant). It’s thought that arnica acts on cells involved in inflammation and improves circulation to the area. 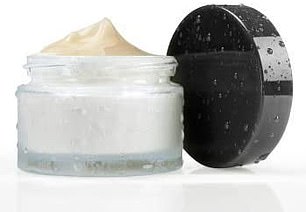 Expert verdict: ‘A bruise is a sign of damage to blood vessels below the skin surface, which leads to blood leaking into the tissues and causes a red hue that, over a few days, goes blue/black, then fades as healing ensues,’ explains Dr Mark Hudson-Peacock, a consultant dermatologist at Stratum Clinics in Canterbury.

‘Arnica is said to help bruises fade more quickly, but there is no convincing peer-reviewed evidence that this is true.

‘Bruises heal on their own, but if patients want to use something, I suggest a vitamin K-based cream, for which there is evidence that it can fade bruises more quickly — albeit only by a day, probably due to its ability to increase the rate of wound contraction, movement of skin cells and formation of blood vessels.

‘A better solution is to apply a cold compress for about half an hour immediately after to reduce inflammation that can worsen bruising and elevate the area where bruising is likely. After 48 hours, swap to a warm compress that helps increase blood flow and aid healing.’

Princess Michael of Kent spoke last year about her visit to a clinic in the Bahamas for stem cell treatment for stiffness and pain in her shoulder.

A similar treatment available in the UK involves having fat extracted from your tummy, which is processed to separate out stem cells, which are then injected into other areas in the body to ‘speed up tissue regeneration’, and ‘reduce inflammation’.

Expert verdict: Ali Mobasheri, a professor of musculoskeletal physiology at Surrey University, says: ‘Stem cells injected into a painful joint may be able to reduce inflammation and pain, but there is very limited evidence to suggest that they are able to regenerate the original tissues following simple injection into the body.

‘More research needs to be done to determine whether stem cells can be combined [with other materials] to facilitate tissue regeneration.

‘They can also have side-effects such as swelling and pain, which — while temporary — would seem ironic and counter-productive.

‘There are also no official clinical guidelines or clinically significant research to say that it works long term.

‘While younger and more athletic patients may benefit because they bounce back more easily from injury in general, many people will be completely unresponsive to such treatments because of the extent of damage and degradation and inflammation in their tissues.’