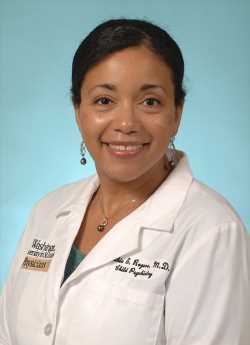 Cynthia E. Rogers, MD, the Blanche F. Ittleson Professor of Psychiatry and director of the William Greenleaf Eliot Division of Child & Adolescent Psychiatry at Washington University School of Medicine in St. Louis, has been named an Emerging Leader in Health and Medicine Scholar by the National Academy of Medicine (NAM). As a crucial part of NAM’s Emerging Leaders in Health and Medicine Program, Rogers and nine other scholars will collaborate, over a three-year term, with NAM and its members to address persistent challenges in health and medicine. The honor was announced Sept. 1.

Individuals chosen for the program are early to midcareer professionals from a range of health-related fields, including epidemiology, psychiatry, medical ethics and engineering. Scholars meet with NAM leadership and members in Washington, D.C.; plan an annual Emerging Leaders Forum; and attend the organization’s annual meeting each October, among other activities.

Rogers has worked to understand how factors such as poverty and mental illness in a family affect infant and child development. She has studied whether mothers’ environments affect brain development in infants and also has evaluated brain imaging in newborns to determine if patterns of connections between regions of the brain predict the likelihood of babies developing excessive sadness, shyness, nervousness or separation anxiety. She is one of the principal investigators of the Healthy Brain and Child Development Study, which identifies differences in the brains of newborns whose mothers struggle with mental health, live in poverty or live with other stress, compared with the brains of newborns whose mothers are not exposed to such stressors.

See here for the NAM’s announcement.