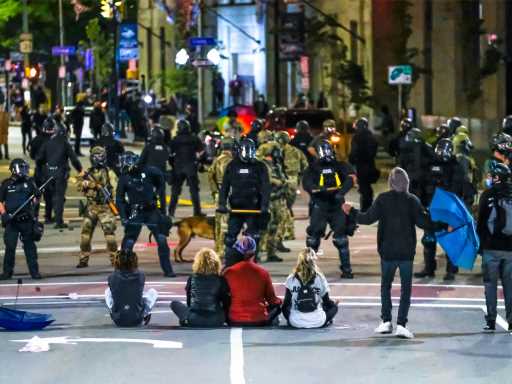 After responding to a family disturbance call, police officers in Rochester, N.Y., handcuffed and pepper-sprayed a 9-year-old girl who was in obvious distress after accusing her mother of stabbing her father on Friday. In disturbing bodycam footage released by the Rochester Police Department, the girl, whose name is being withheld and whose face is blurred in the video to protect her identity, can be seen walking away from police officers through a residential neighborhood. Many have already pointed to this incident as evidence that cities should be dispatching social-service and mental-health professionals instead of police for certain emergency calls.

In the first video, the girl’s mother appears off camera yelling at her daughter, using profanity and abusive language, and at one point attacks the 9-year-old. The officer on site separates them but does not apprehend the mother, who then engages in a verbal altercation with passing motorists before fleeing the scene.

Warning: Videos containing graphic content and may be disturbing to some viewers.

Officers then force the child to the ground in the snow, handcuff her and attempt to place her in the back of a patrol car while the she is crying out for her father. When she refuses to put her feet in the car, one officer says, “Just spray her at this point.” One of them sprays her at close range and pushes her into the car, as she screams in pain.

The footage also shows that at least five other patrol cars that arrived at the scene — for a 9-year-old girl and her mother. The police later reported that she was taken to Rochester General Hospital and later released.

The Rochester Police Department came under scrutiny just a few months ago in after the March 2020 death by suffocation of a Black man, Daniel Prude, while in custody. Bodycam footage, which was not released until months later and after Prude’s family sued the city, revealed that officers placed a hood over Mr. Prude’s head while transporting him. It has since been proven that city officials attempted to bury the footage to avoid national attention and public fallout. It was but one example of police officers’ use of excessive force in a year full of many.

In a press conference following the release of the footage of the young girl, one police official said the officer was “required” to spray an “irritant” in the child’s face due to her lack of cooperation in entering the back of the police car, according to the Democrat and Chronicle.

Rochester Mayor Lovely Warren said she has ordered a complete review of the incident and welcomes a full investigation by the police accountability board.

Inv. Mike Mazzeo, president of the union representing the officers involved, asked that the public not blame the officer, explaining that the situation was complicated.

“I’m not saying there are not better ways to do things “But let’s be realistic about what we’re facing,” Mazzeo said during the press conference. “It’s not TV, it’s not Hollywood. We don’t have a simple [situation], where we can put out our hands and have somebody be instantly handcuffed and comply. It’s not a simple situation.”

Interim Police Chief Cynthia Herriott-Sullivan sounded more contrite about what happened. “I’m very concerned about how this young girl was handled by our police department,” she told reporters. “It is clear from the video we need to do more in support of our children and families.”