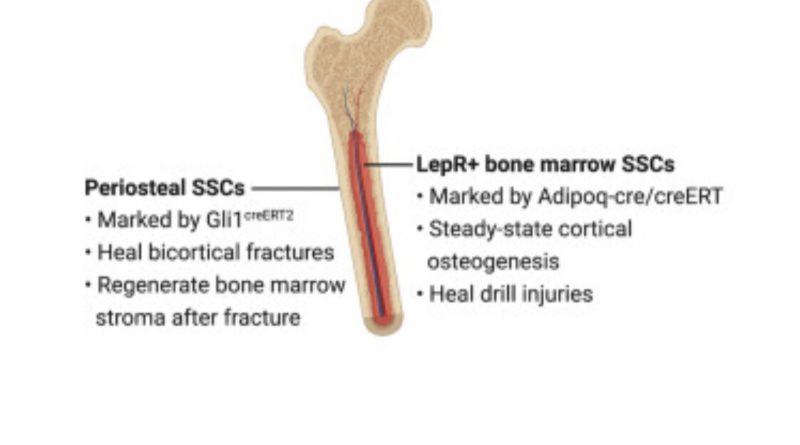 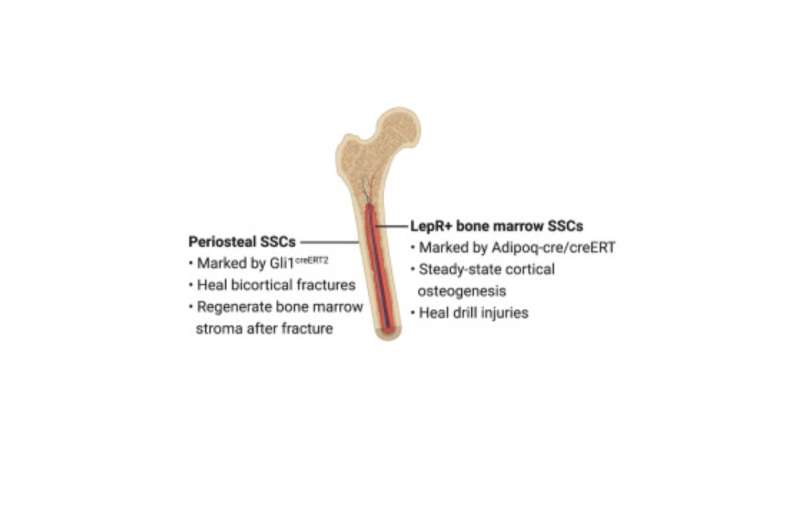 In the study, published in Cell Stem Cell, researchers identified distinct cell markers that allowed them to track SSCs in the bone marrow inside of bones versus SSCs in the periosteum on the outer surface of bones. They found that while bone marrow SSCs are responsible for the ongoing production of bone cells in normal bones and the repair of certain bone injuries, periosteal SSCs are primarily responsible for fracture repair.

SSCs must generate new bone cells throughout life to maintain and repair the skeleton. The skeleton is unusual in that it has multiple kinds of stem cells that reside in different regions of bone, including within the bone marrow and in the periosteum. After bone injuries, like fractures, SSCs in the bone marrow and periosteum begin to proliferate but make very different contributions to bone repair.

Researchers in the Morrison lab found that bone marrow SSCs repair smaller, stabilized bone injuries and are responsible for new bone growth under normal conditions during adulthood. In contrast, periosteal SSCs are primarily responsible for the repair of larger, unstabilized injuries like fractures. Surprisingly, researchers also found that periosteal SSCs regenerate not only bone but also cells within the bone marrow at the fracture site, giving rise to new bone marrow SSCs.

“The discovery that different bone-forming stem cells are responsible for different aspects of bone maintenance and repair will allow us to focus future bone regeneration efforts on the correct stem cell population,” said Sean Morrison, Ph.D., the Director of CRI and a Howard Hughes Medical Institute Investigator.

Historically, the contributions of bone marrow versus periosteal SSCs to bone repair has been debated, in part because few markers have been available to distinguish these cell populations. To overcome this roadblock, postdoctoral researcher Elise Jeffery, Ph.D., systematically compared 11 genetically engineered mouse lines that were previously used to label bone-forming cells to identify markers that could distinguish periosteal SSCs from bone marrow SSCs.

They discovered periosteal SSCs were marked by a signaling protein called Gli1, while bone marrow SSCs were marked by leptin receptor and adiponectin. These findings are consistent with previous research from the Morrison lab that found leptin receptor-positive bone marrow SSCs are a major source of new osteoblasts for bone maintenance and repair.