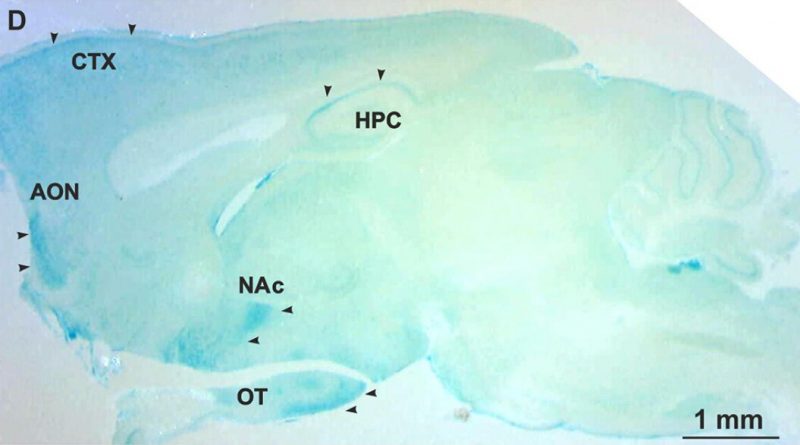 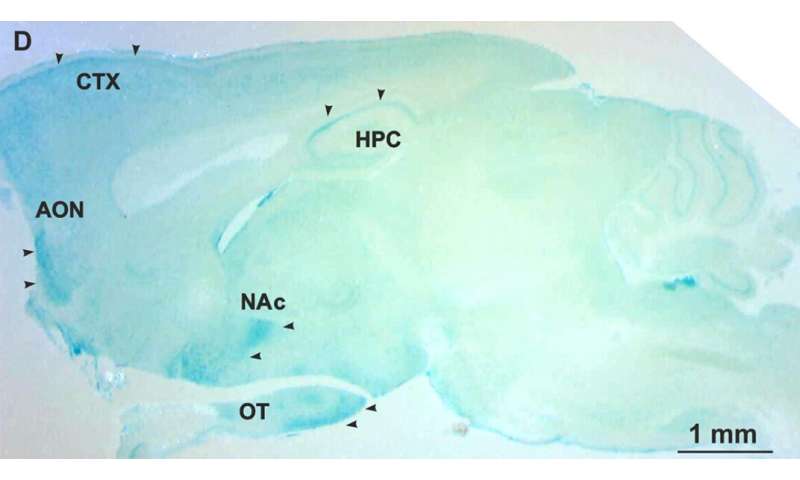 Neurotransmitters are chemicals that transmit signals between neurons or from neurons to other cells. They interact with specific receptors found in the brain of humans and animals, controlling a variety of biological processes, e.g. fear, anger, pleasure, memory, energy, appetite and sleep. Today, scientists know various types of neurotransmitter systems: dopamine, norepinephrine, serotonin, histamine, glutamate, and many others. A large number of clinically used drugs for many brain disorders is based on the action on these systems.

The St Petersburg University researchers, together with colleagues from the Istituto Italiano di Tecnologia (Genoa, Italy) and the Pavlov First St Petersburg State Medical University (St. Petersburg, Russia) conducted experiments on mutant mice. They were able to show that there is a novel neurotransmitter system in the brain—in it, signal transmission of innate olfactory information into the “emotional” brain areas occurs via the trace amine-associated receptor 5 TAAR5.

“Trace amines are cousins of well-known neurotransmitters dopamine and serotonin,” explains Raul Gainetdinov. “It is known that humans have six subtypes of trace amine-associated receptors that sense trace amines. The TAAR1 receptor is the best investigated, and it is considered so promising that in May 2019, the FDA (Food and Drug Administration, the agency of the US Department of Health and Human Services, which approves the launch of new drugs on the market) designated the experimental drug based on action on TAAR1 of Sunovion Pharmaceuticals the status of “breakthrough treatment” for schizophrenia. Since the FDA accepted the second stage of the clinical trial of their medication for schizophrenia as the third stage, the drug should enter the market within a few years. This should be the first antipsychotic drug in the world that is not a dopamine receptor blocker. It is worth noting that researchers of the St. Petersburg State University are also developing new drugs based on the action on TAAR1.”

Researchers drew attention to another trace amine-associated receptor, TAAR5. It was previously believed that all other receptors for trace amines, with the exception of TAAR1, are exclusively olfactory and participate only in the perception of socially-relevant innate odours (for example, the smell of rotten tissue, predators or pheromones). Therefore, it is believed that they are not useful in the search for novel cures for brain diseases. However, the St. Petersburg State University scientists were convinced of the contrary: to prove the important role of TAAR5 in the neuronal functions and psycho-emotional state, they conducted a series of experiments with knockout laboratory mice—the gene encoding the TAAR5 protein was “knocked out” or “turned off” in these animals. Instead, a marker was inserted into the genome, which allowed the researchers to see in which areas of the brain this protein is present.

“It turned out that TAAR5 is found not only in the nose and olfactory bulb, but also in the “emotional” brain areas associated with the olfactory system: the amygdala, hippocampus, thalamus and other structures,” said Professor Gainetdinov. In addition, we observed that the lack of TAAR5 results in the alteration of the concentration of serotonin in the brain, and this is the major indicator of changes in emotional behaviour. Finally, knockout mice without TAAR5 behave as if they are under the treatment with antidepressants or anti-anxiety drugs: they are not afraid of bright light and are not amenable to stress.

Preliminary data also suggest that all other trace amine-associated receptors are not only mediators of the innate olfactory function, but are also variously involved in the regulation of the psycho-emotional state. According to Raul Gainetdinov, this discovery can result in the development of fundamentally new drugs that can deal with schizophrenia, depression, anxiety disorders, various addictions, possibly even Parkinson’s disease and Alzheimer’s disease. The data obtained may have impact to various fields of neuroscience, psychiatry, psychology, and even aromatherapy.