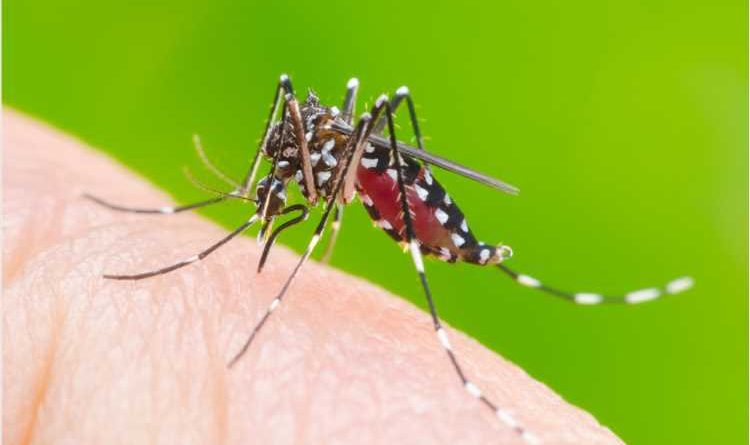 Previous studies have shown that arboviruses grow in the salivary glands of mosquitoes from the Aedes family (e.g., Aedes aegypti and Aedes albopictus). These mosquitoes act as a vector and transmit the virus to the human host through their bites. 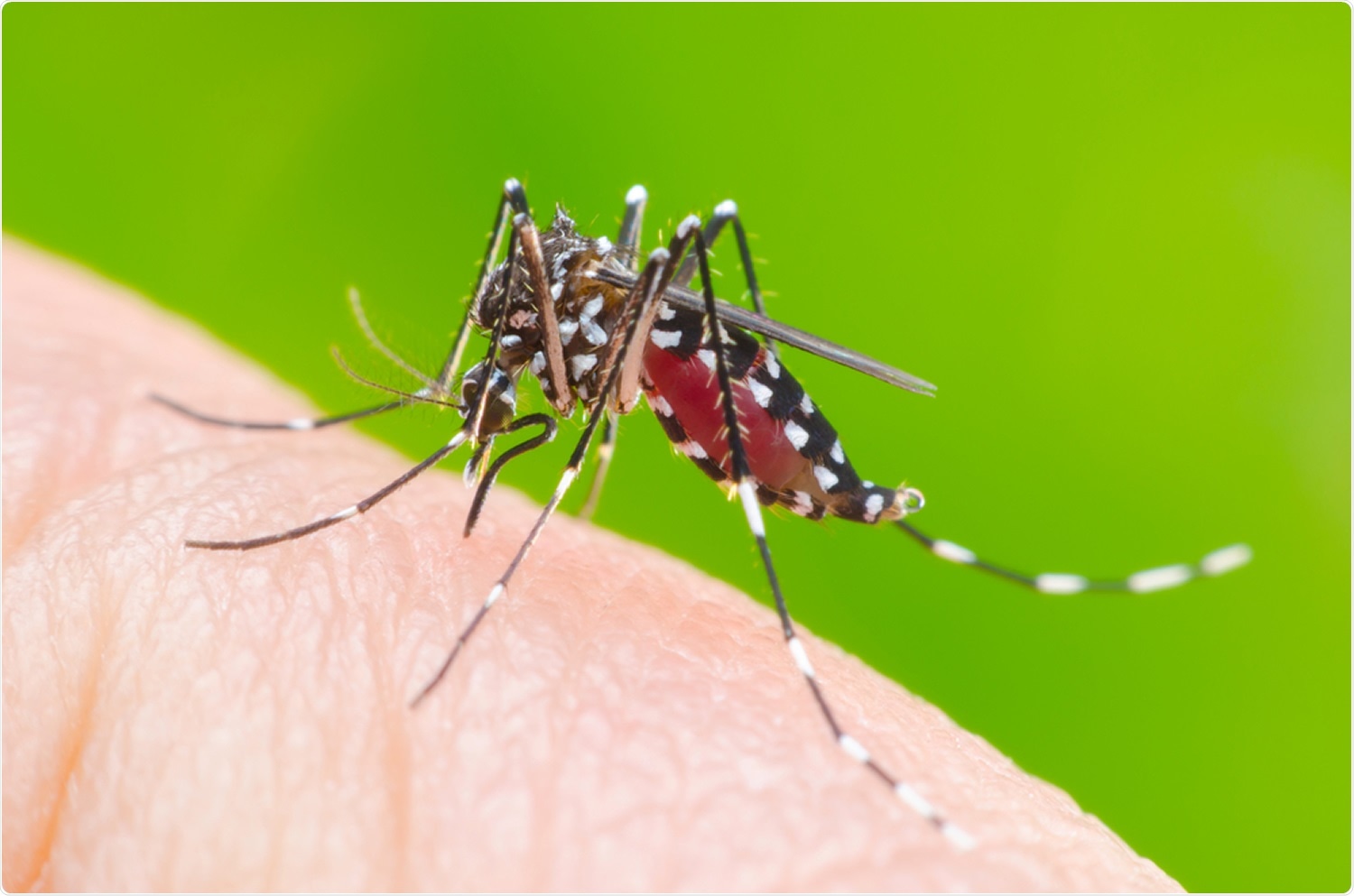 According to recent reports, these vectors are increasing in number due to global warming and international trade. These events raise concerns regarding the emergence of arboviral outbreaks and epidemics around the world. Hence, it is essential to further our understanding of the host-virus interactions associated with alphavirus infection to identify potential targets crucial for the development of effective therapeutics.

Alphaviruses are positive-sense, single-stranded RNA genomes of size around 11kb. The viral genomes are capped and polyadenylated, similar to cellular mRNAs. The coding capacity of their genomes is limited; therefore, they heavily depend on cellular proteins to complete the viral life cycle. During infection, the genomic (g) RNA of alphavirus plays a dual role, i.e., acting as genome and messenger (m) RNA. Cellular RNA-binding proteins (RBPs) are involved in almost all steps associated with an alphavirus life cycle. Researchers have pointed out that the complement of RBPs engaged with viral RNA (vRNA) in infected cells is not well understood.

Several studies in the past have developed strategies to elucidate the composition of vRNPs within cells. For example, a recent study used viral cross-linking and solid-phase purification (VIR-CLASP) to determine protein-RNA interactions that occur when alphavirus RNA infects host cells.

The study revealed that during the initial steps of infection, the gRNA of alphaviruses influences functionally important interaction that involves hundreds of cellular RBPs. Cross-link-assisted mRNP purification (CLASP) helps to develop a profile to elucidate how these protein-RNA interactions evolve in circumstances where active viral replication takes place.

Even though results obtained via CLASP datasets are very informative, an alternative approach is required as the current system represents a very low frequency of bona fide RBPs, due to the promiscuous nature of formaldehyde cross-linking and/or limited specificity in the purification of vRNA.

To address this gap in research regarding the understanding of post-replicative alphavirus RNPs, scientists have created a novel proteome-wide approach known as viral RNA interactome capture (vRIC). This study is available in the bioRxiv* preprint server while awaiting peer review.

In this study, researchers studied the composition of ribonucleoproteins (RNPs) of a prototypical arbovirus called Sindbis (SINV), an alphavirus.

The current study applied vRIC to study SINV RNPs and reported the presence of more than 400 cellular proteins that interact with vRNA. These proteins have various functions such as splicing, RNA decay, RNA export, stability, and translation, etc. In addition, several unorthodox RBPs were also present, which could be E3 ubiquitin ligases, kinases, chaperones, and metabolic enzymes. These RBPs were found to be involved with the regulation of the RNP microenvironment. Additionally, upon infection, a pool of nuclear proteins was found to get redistributed in the cytoplasm, probably trapped by vRNA. This finding indicates that SINV RNAs acts as ’spiderwebs’ that capture host factors required essential for viral replication and gene expression in the cytoplasm.

Interestingly, various functional assays determined that SINV RNP components play essential roles not only during SINV infection but in a broad range of other viruses. For instance, the tRNA 2 ligase complex (tRNA-LC) is associated with both SINV and severe acute respiratory syndrome coronavirus 2 (SARS-CoV-2) infection.

Researchers have also indicated that cellular RBPs could be promising targets for broad-spectrum antiviral therapies. This is because functional perturbation of many of these host proteins has profound effects on virus infection. Hence, this strategy could be effectively used for the development of broad-spectrum therapies. 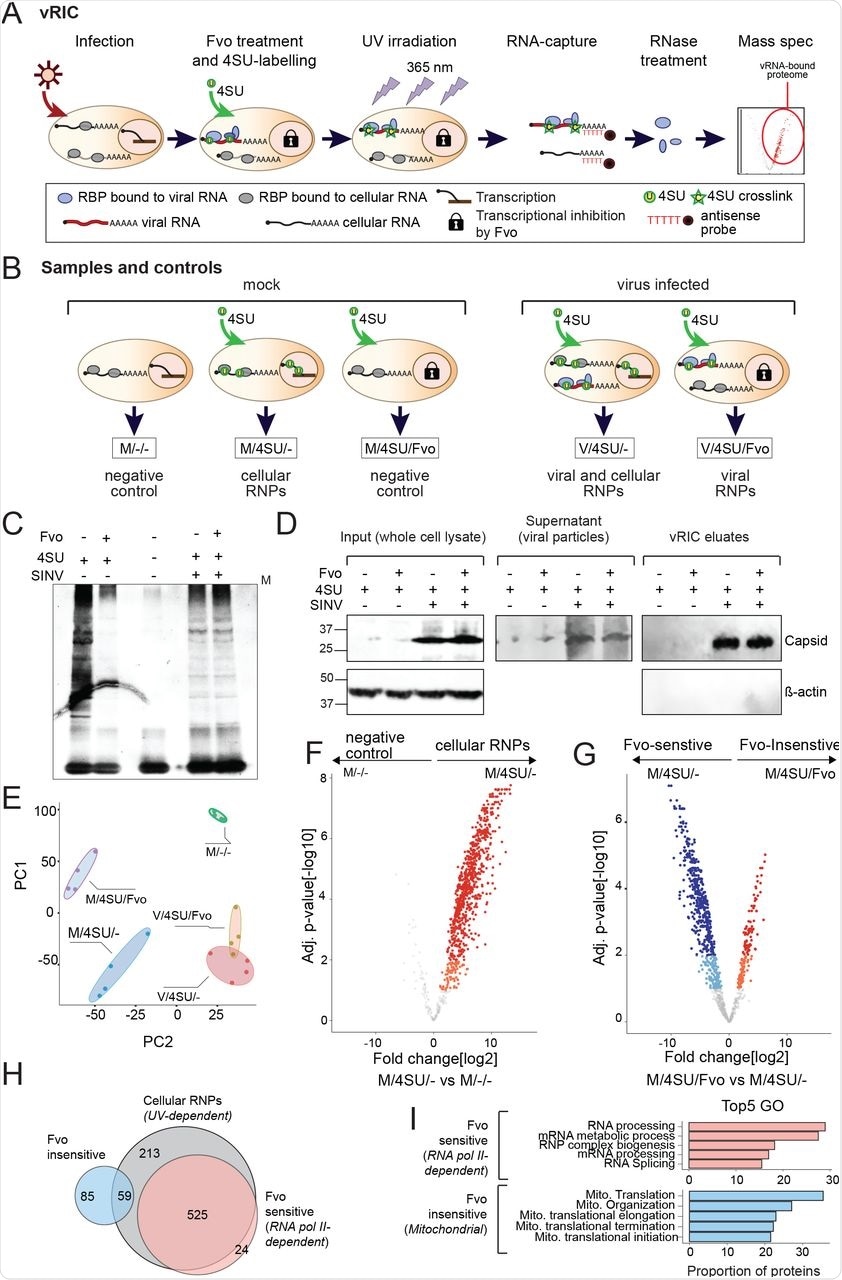 vRIC implementation in SINV infected cells. A) Schematic of the viral RNA interactome capture (vRIC) workflow. B) Schematic of the different experimental conditions and controls used in the study. C) Sliver staining analysis of vRIC eluates with the experimental setting outlined in B. D) Immunoblotting of SINV capsid in whole cell lysates, supernatant and vRIC eluates, using β-actin as control. E) Principal component analysis of vRIC experimental and controls after proteomic analysis. F and G) Volcano plots showing the fold change(log2) and adjusted p-value of each protein (dot) in the M/-/- versus M/4SU/- (F) and M/4SU/- versus M/4SU/Fvo (G) comparisons. Proteins enriched within 1% FDR are coloured in red and blue and those within 10% FDR in orange and cyan. H) Venn diagram comparing the proteins significantly enriched in each of the comparisons in F-G. These groups are classified: UV-dependent RBPome (M/-/- vs M/4SU/-), Fvo-sensitive (enriched in M/4SU/- over M/4SU/Fvo, cRNPs) and Fvo- insensitive (enriched in M/4SU/Fvo over M/4SU/-, mitoRNPs). I) Top enriched Gene Ontology (GO) terms for Molecular processes in Fvo-sensitive and Fvo-insensitive RBP sets.

Importance of the Study

In this study, researchers provided a systematic and comprehensive approach, vRIC, to determine the composition of vRNPs in infected cells. In its current form, vRIC can be utilized to study any polyadenylated vRNA. However, substitutions of oligo(dT) by specific antisense probes or total RNA isolation methods could further its horizon and could be applied to a wide range of RNA and DNA viruses encoding an RNA-dependent RNA polymerase.

In the protein-protein interaction study using FAM98A, researchers found that the tRNA-LC interacts with the spliceosome initially in uninfected cells and subsequently shifts to the translation apparatus in infected cells.

These events represent the relocation of the complex to the viral replication factories. More studies are required to elucidate further the idea of changing the locations and determine the molecular determinants of RBPs that influence functional repurposing in infected cells.

In vitro experiments identified two potential inhibitors, namely, 5-Azacytidine and Topotecan that are effective against alphaviruses, such as SINV, SFV and RRV, and HIV-1. The utility of more effective drugs with antivirals properties could be explored in the future.

Priyom holds a Ph.D. in Plant Biology and Biotechnology from the University of Madras, India. She is an active researcher and an experienced science writer. Priyom has also co-authored several original research articles that have been published in reputed peer-reviewed journals. She is also an avid reader and an amateur photographer.