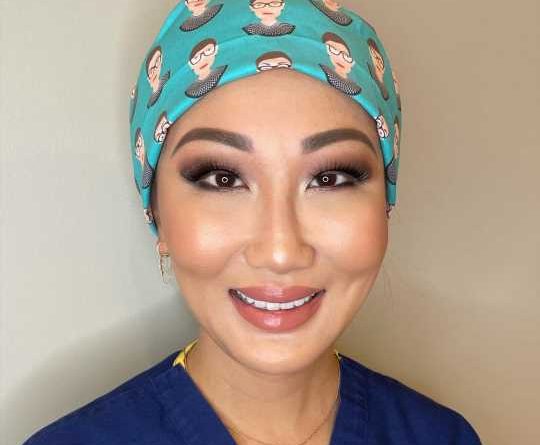 At 6 years old, Tiffany Moon immigrated from China to the United States not knowing "a lick of English," she says. Despite experiencing bouts of racism throughout her childhood and adolescent years, the Real Housewives of Dallas star excelled in her academics and graduated from medical school when she was just 23 years old. Now, the mom of two details her journey working as an anesthesiologist during the COVID-19 pandemic and opens up about the ongoing microaggressions and racism she continues to experience today. This is her story, as told to PEOPLE.

As a child, my parents moved around a lot. We were very much working class. They were still in school and working odds and ends jobs that they could. So I grew up in a very not affluent neighborhood. And to my parents, the most important thing in life was getting a good education and a stable job and having a family. So they instilled that in me so much so that I was laser-focused.

It was really scary [growing up as an immigrant]. Kids can be awfully mean. I remember riding the bus to school and people would call me [racial slurs] and they would do the eye thing and sing little songs about me. I remember occasionally being pushed or hit or tripped, having spit wads thrown in my hair. They just thought it was funny because a bunch of them did it and I was alone. So I think in some ways, that sort of racism is taught because I think they probably watched something or learned that from somewhere. Then some people would call me "egg roll." That was my nickname in middle school. I don't know why. The way I dealt with it was to try to be in on the joke and be like, "Oh, haha, I see what you did there," instead of fighting back or actually letting people know that I didn't like that because that was not my personality. My personality was to avoid conflict at all costs and just go with the flow.

I went to an early college program for high school students where you basically skip the last two years of high school. And then before I knew it, I was graduating from Cornell. I was 19 years old. And then I went straight into medical school and graduated at 23 years old in May of 2008.

When [COVID-19] first started, I would say around March of 2020, and we started seeing these cases, we were frightened because we weren't sure if we were going to get sick. Back then, we knew so little and every time you turned on the news, it would be about the number of new cases and deaths. As an anesthesiologist, I take care of patients while they're in the operating room, undergoing surgery. So I have to intubate patients, which means that I am directly in their airway. If there's coronavirus in there, I'm going to be exposed to it. So I was very, very scared. I can't describe the amount of fear and anxiety and angst that I had then because I was committed to going to work and caring for my patients. I never one day called in sick. I never once refused to take care of a patient who was known to have a positive COVID test. I've taken care of dozens since then. But in some selfish regard, I kept thinking, gosh, while I'm taking care of this other person, am I going to do harm to myself or my family?

During an episode of Real Housewives of Dallas, Moon opened up about her ongoing experience with racism in the workplace and revealed details surrounding a patient's recent request for another doctor.

It's probably a good thing that I had two masks and a face shield on at the time that I was conversing with this patient because I think there was a look of utter disgust and anger on my face, but they probably didn't see it because I was so covered up. To the patient, I said, "If that's how you feel, I'll go find you another doctor." And that was easy to do because I work in a large group practice where we can switch out cases. But I was really furious.

Then it brought back this flood of emotions of being that helpless little 6-year-old on the school bus, getting called a c—k and the slanty eyes thing and being pushed, like, oh, sorry. And just shoved a little. And it brought back all those emotions that I thought I had suppressed from 30 years ago; they just came boiling up inside me, like reflux acid in my mouth. And it just left such a bad, sour taste in my mouth. It's hard. It made it easier that I was in the position of a physician and a healer and this particular patient was very sick and needed emergency surgery. And so I compartmentalized it, blocked it off. I actually wasn't upset until later. I came home and told my husband, I said, "You won't believe what happened at work today." And that's when I became upset. While I was at work, I was like, "Okay, fine. I'll go find you another doctor." And then I did, and then we switched cases. And then I went to go take care of another patient. So at work, it didn't even register until I came home and told my husband what had happened. And he was like, "Oh my God, someone really said that to you?" And I was like, "I know, can you believe it?"

Now, Moon is finally starting to see flickers of hope.

I got the first [vaccine] dose. I got Pfizer. I got the first dose and then three weeks later, I got the second dose and I was joking with my friend who's a doctor. And I was like, "Girl, if this had been a randomized controlled study, I would've told you, I think I got placebo because I got no side effects, less side effects than when I got the flu vaccine." So it was fine for me. I know that that's not true for everybody. Other people had myalgias, maybe a little fever or some other sorts of things, but I can only speak from my personal experience. And that was the easiest two-part vaccination I've ever done.