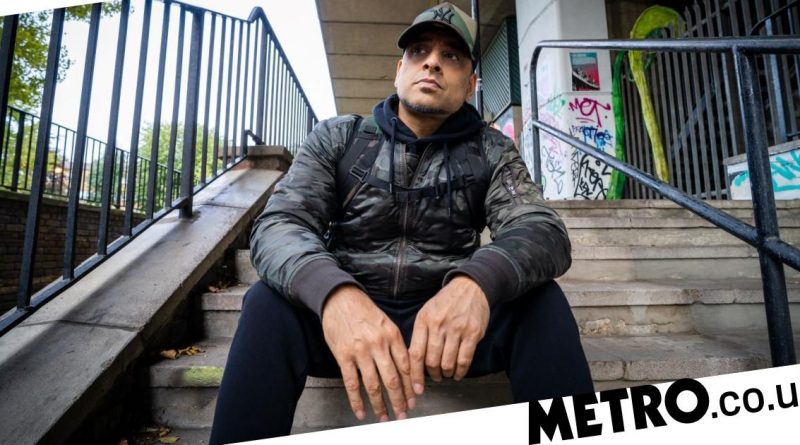 Neil Patel – known as N1 – is a rapper and yoga teacher from London. Having noticed a worrying increase in violent crime in his local area over the last year, he wanted to do something to help.

So N1, who is also a hip hop producer, combined his love of music with his yoga-training to create Hip Hop Breathing, a grounding breathing exercise set to hip hop beats that aims to promote calm and peace.

His is offering the classes, for free, in the worst-hit areas of the capital, and is also set to release a hip hop-yoga album called The Breathe Experience.

This will be the world’s first musical album to contain a traditional breathing exercise as a separate track.

N1 hopes that his innovative concept will provide kids from crime-affected areas a way into the benefits of yoga.

‘From my flat in Kilburn I noted a stark increase in police and local violent crime in the last 12 months,’ N1 tells Metro.co.uk. ‘Sirens were wailing all day and night suddenly.

‘I’ve always been a yoga teacher and a rapper, so I used to count yoga breath counts very rhythmically to beats in my head.

‘I decided to make those counts to real beats in order to reach kids involved in knife crime the many benefits of controlled breathing. I knew they were unlikely to go to yoga, but very likely to listen to hip hop.’

‘I hated to see what was happening on the streets,’ says N1. ‘I felt that a lot of kids were simply lost and did not have peace and love within themselves.

‘I knew the power of meditation and yoga and breathing exercises, so I felt I needed to use my tools in a way to attempt to reach them.’

Hip hop breathing is where the mind is calmed down by slowing down the respiration cycle in line with a slow, hip hop beat.

‘When the breath is slowed down, the mind, cells, blood pressure and nervous activity slow down with it,’ explains N1. ‘This creates a sense of peace biologically, and it is immediately effective on anyone who does it – even if they don’t believe in it at first.

‘Once the breath is slow, the person is open to internal experiences like peace, tolerance, wisdom, clarity – and even mercy and love.

‘They could even go on to meditate from there if they wished or do more classical yoga breathing. But, as long as they get some calmness and peace, I’ve done my bit to reduce the anger on the streets.’

N1 doesn’t believe there is a quick fix for knife crime. He believes true improvements can only be made when it is tackled from a number of different angles at the same time.

‘I am trying to teach people that knife crime is not just about criminals, but about four areas, which I call the knife crime “square”,’ says N1. ‘Government, society, family and the individual.

‘All are responsible for what is happening. Until we stop blaming individuals and take collective responsibility, the problem won’t stop.’

N1 hopes that his breathing and meditation practise will help individuals reconnect with a calm and loving place.

‘I base it around hip hop because that is the church of the street now,’ he says. ‘I feel compassion for the victims and the perpetrators. The kids are a product of structures above
them.

‘Jail is not the only answer. If you want more love and wisdom, you have to show it.’

N1 is offering these sessions for free for anyone who needs it and is encouraging people to contact him to set it up.

The project is self-funded by N1, and downloads of his music are helping to widen his reach.

‘Breathe’ has just been released and is a single from the forthcoming non-profit hip hop-yoga album ‘The Breathe Experience’ – which is out on 20 February.