Home » Health News » Q&A: Why getting ahead of COVID-19 requires modeling more than a health crisis 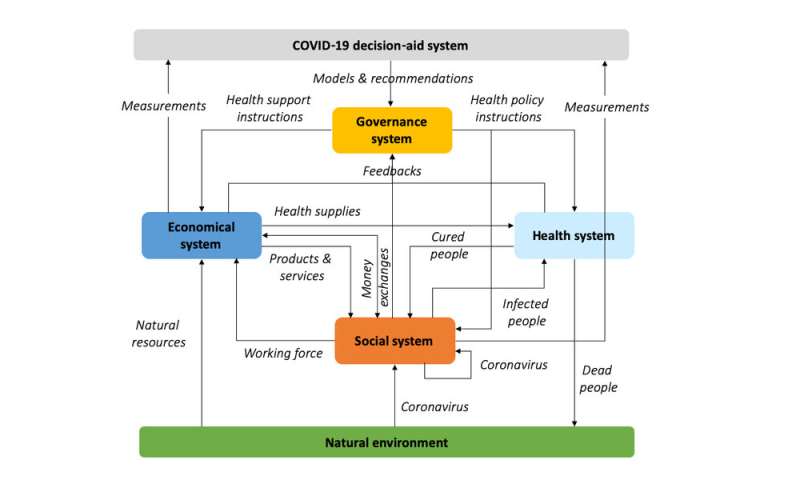 A country’s actions, or lack of action, in responding to the pandemic is partly informed by models that predict the virus’ impact on various aspects of society. But Olivier de Weck, professor of aeronautics and astronautics and engineering systems at MIT, says that most of these models are short-sighted. He and experts from countries with wide-ranging responses to the pandemic have a paper in the September issue of Systems Engineering, addressing what they see as a crisis in COVID-19 modeling.

The researchers show that the world’s scattered and inconsistent efforts to contain the virus can be traced, in part, to models that forecast impacts over just a few months and that view the pandemic as primarily a health crisis.

Instead, the team is calling for a longer-range, holistic approach that models the COVID-19 pandemic as a complex system. The researchers have assembled a basic model that predicts impacts of COVID-19 that addresses the complex interactions between a society’s health and its economy. De Weck spoke with MIT News about some surprising trends that their model reveals, and why viewing the pandemic from a systems standpoint will help countries get ahead of the virus.

Q: From the start of the pandemic, it became clear that preserving society’s health while maintaining the economy would be a huge challenge. Has it really been the case that existing models have not addressed both health and economic impacts of the pandemic?

A: It is natural that when an epidemic starts, decision-makers and the public see (and hope) that it will be a short-term event and that it will affect the health of only a small fraction of the population. Classic epidemiological models subdivide the population into different cohorts and predict the spread and statistical outcomes of the disease. While these models are useful to test the effectiveness of different countermeasures, they usually fail to model the tradeoff between economic losses and human losses. This is a typical reflection of the fact that scientific inquiry mostly occurs in silos. Combining medical, economic, and governance models into a unified view is antithetical to the classic disciplinary approach.

Our work shows that we need to provide a larger systems framework to think about and quantify the bidirectional coupling between the health system, the economic system, and the governance system. This needs to happen in real-time by connecting and integrating disease models, economic impact analysis, and long-term predictions across multiple scales.

Q: You’ve assembled a simple version of such a systems-based model. How does it work?

A: The key ideas in our work are that first, models that capture the underlying social network structure of society (in a statistical sense) are more robust than the simpler compartment models. The fact that most of us have primary contacts mainly within our family and work environments means that there is an inherent resilience to disease spreading. The second important point is that countermeasures such as strict lockdowns create an economic cost such as lost work, and if maintained for too long can become counterproductive. However, not taking any countermeasures at all also has a huge financial cost to society in terms of human lives lost.

This brings up the most delicate point that few scholars and politicians are willing to address: What is the economic value of a human life lost? Based on the actions taken by governments we can actually infer implicitly how much economic value a government places on an average human life lost, or, said another way, how much it is willing to spend to prevent a fatality from occuring.

Consider a scenario where there is a fast government response, such as ordering a lockdown within five days of detecting that 0.05 percent of the population has been infected by the virus, and maintaining strict compliance better than 80 percent for 30 days. We calculate that in this scenario the total losses, including the value of human lives lost (nominally valued at $1 million dollars each), are only 27.8 percent of the losses of a “do nothing” baseline. In order for a government to justify a “do nothing policy” over a quick reaction scenario, it would have to implicitly valuate a human life lost at less than $108,600—only about 10 percent of the nominal value—which is the marginal difference in the economic loss of work divided by the difference in lives lost due to the epidemic.

This may be the case in countries with low GDP, like Brazil, that have responded poorly to the pandemic. We note that policy models that rely on explicitly stating an economic value of human life to justify government action will always be contested and controversial. However, without including such economic models in the overall systemic model of society it is not possible to rationally justify any policy, whether interventionist or not.

Q: What are some trends that emerged through your systemic modeling approach?

A: We ran different scenarios for how a society might respond to the pandemic based on a set of actions and their timing. This includes taking no countermeasures, ordering a strict lockdown after some delay and some detection threshold, maintaining the lockdown for a certain duration, easing restrictions and also the level of rigor of following lockdown, social distancing, and mask wearing. In this way we found that the worst case is a situation where a lockdown is ordered late, only partially followed (with less than 80 percent compliance), and lifted too soon.

In a nutshell, COVID-19 is a nonlinear control problem with delay and only partial observability—a huge challenge both in theory and in practice.

Since our co-authors are from France, China, Singapore, Norway, and the U.S., we were able to essentially replicate the large variety of responses observed around the world. What we recommend going forward is the creation of an integrated information system at three levels—strategic, tactical, operational—that allows for rapid information flow and optimal responses at both the local and global level. The COVID Pass system at MIT, with weekly testing, health attestations, and detailed views by dorm, building, and department, comes close to what we recommend in this paper.