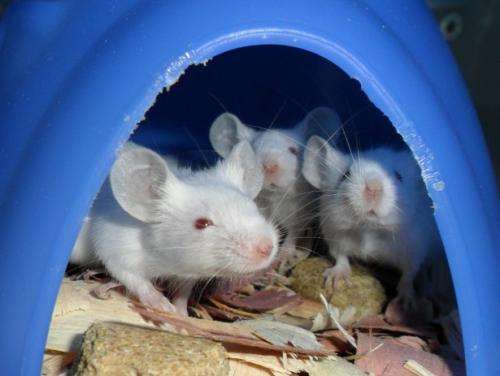 There is a growing consensus that the gut microbiome is involved in many aspects of physical and mental health, including the onset of Parkinson’s disease, multiple sclerosis, and even some behaviors. The microbiota of the small intestine in particular are likely to have important effects on human health because most nutrients and drugs are absorbed by the body in this location. To study the gut microbiome, researchers typically use mice and rats because these animals are easy to take care of, reproduce quickly, and have many biological similarities to humans. But there are significant differences between humans and these animals. One such difference—the propensity for laboratory rodents to eat their own feces—may have major implications for research related to the small-intestine microbiome.

In a study published in the journal Microbiome, researchers in the laboratory of Rustem Ismagilov, Caltech’s Ethel Wilson Bowles and Robert Bowles Professor of Chemistry and Chemical Engineering and director of the Jacobs Institute for Molecular Engineering for Medicine, show that standard lab mice (that consume their feces) may have important differences in their small-intestine microbial communities as compared to humans.

The research community has been aware for many decades that lab rodents consume feces, a practice known as coprophagy, but what has not been understood is how this activity actually affects conditions inside the small intestine, says Said Bogatyrev, Caltech postdoctoral scholar in chemical engineering and lead author of the study.

“Most researchers also assume that coprophagy is solved by housing mice on wire floors that allow the feces to fall through. However, rats and mice are very good at eating poop right as it comes out,” he says, “so we suspected the wire floors might not actually be that effective.”

In the study, Bogatyrev and his fellow researchers investigated the microbiome in the small intestines of lab mice to see whether the microbiome and its function differ when these mice are prevented from consuming their own poop, and if doing so would make these lab mice more similar to humans.

To find out, the research team fitted mice with “tail cups”—basically little mouse diapers that capture the animals’ feculence and prevent them from eating it. When the researchers analyzed the gut contents and microbial communities of these diapered mice, they found significant differences in their small intestines as compared with those of standard mice.

As might be expected, mice that consumed poop had much higher microbial loads (around 100 times higher), of large-intestine (and fecal) microbiota, and different profiles of bile acids in their small intestines, compared with the diapered mice. Their intestines were similar, however, to those of humans with microbial overgrowth disorders, such as small intestinal bacterial overgrowth (SIBO), which can cause diarrhea and weight loss. In contrast, the conditions inside the small intestines of the mice that did not eat their own feces more closely resembled the conditions inside the small intestine of a healthy human.

Bogatyrev and his colleagues did not attempt to determine how self-reinoculation might generally affect research involving mice, but they suspect that there could be wide-ranging implications to numerous research areas if the digestive systems of the mouse models do not behave like those of humans.

“One area could be dietary research,” he says. “If you have more microbes in the small intestine, that, in turn affects the bile-acid composition there and the nutrients in the diet may be absorbed differently. Fats, for example. Another area could involve probiotics and the microbial ecology of the gut. Self-reinoculation can cause inconsistent results in controlled-administration protocols because you don’t know how the probiotics are being reintroduced to the gut by the animals themselves.”

And another big area where coprophagy would matter could be drug research, Bogatyrev adds. Researchers use rodents in preclinical models, and the drugs administered are often absorbed in the small intestine, where they can potentially be affected by small-intestine microbiota.

“Although there’s a recognition that self-reinoculation with fecal flora and metabolites may be an issue and it may affect some study outcomes, we just don’t know yet how important it is. This work suggests that the effects of self-reinoculation need to be rigorously tested, which provides a plethora of opportunities for future research,” Bogatyrev says.