Home » Health News » Pink Jokes 'This One Is Trouble' as She Teaches Son Jameson, 4, Lyrics to Daughter Willow's Song 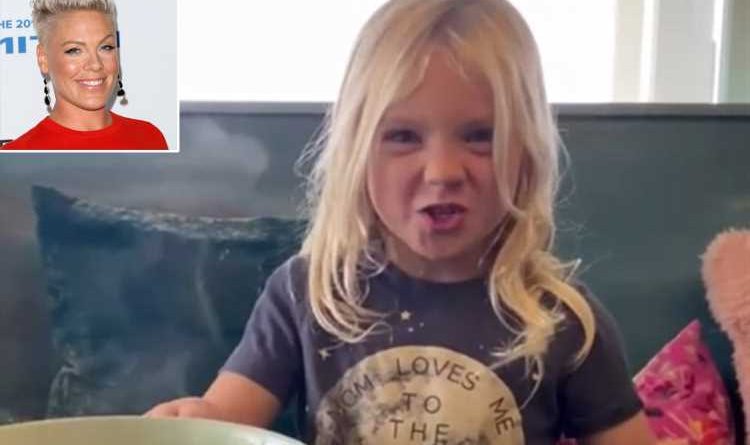 Just a day after showing off her 9-year-old daughter Willow Sage's vocal talents on TikTok, "Hurts 2B Human" singer, 41, shared an adorable video son Jameson Moon, 4, learning what appears to be an original song by his older sister.

"Hold on, I'm teaching Jameson a song — your song," Pink tells Willow in a video shared on Tuesday.

In the clip, Jameson sits in front of a dinner table as Pink sings the verses. However, instead of singing the melody, Jameson puts his own edgy spin on the tune by repeating each line back to Pink in a deep growl.

The pop star then laughs, asking her son, "What version is that?"

"The low version," he quips.

Pink jokingly captioned the video on her TikTok, "This one is trouble." Willow originally sang the song in a TikTok video posted to Pink's account on Monday.

"Or I can sing 'Cover Me in Sunshine,' " she told her mother in the clip, before breaking into song.

Pink then panned the camera to herself, gushing with a smile, "Okay!"

The comments section was quickly flooded with praise for Willow.

"She's just as awesome as her momma," one fan wrote, while another commented, "Adorable and so talented." Pink has always been supportive of Willow's passion for music. In 2016, the songstress opened up to PEOPLE about how her daughter has contributed to her own musical career.

"I know everybody with kids says this — that their kid is their barometer of cool — but Willow tells me which songs of mine she likes and the way she does that is she just starts singing them after one listen," she said.

Pink continued, "She is my inspiration for everything."

Last year, the mother-daughter duo performed a duet of Nat King Cole's "The Christmas Song" during The Disney Holiday Singalong.