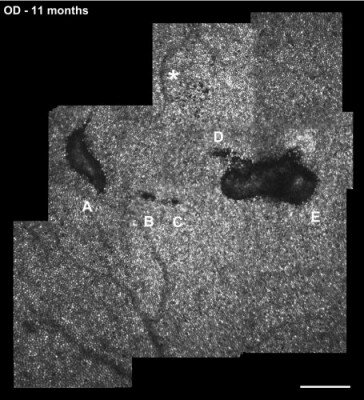 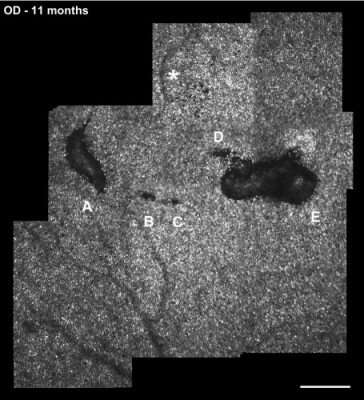 Laser pointers used to exercise pets may seem like safe and simple low-powered devices, but an Ohio teen learned the hard way that staring at the narrow beam can cause permanent eye damage.

His minimal vision loss tells some of the story, but a high-resolution optical imaging device developed by Ohio State University researchers showed in stark detail that cells in the boy’s retinas are missing—”blasted away” by the laser, his ophthalmologist explained.

This area of the eye is home to photoreceptors, light-sensitive cells (often referred to as rods and cones) that allow us to “see.” These cells are most dense in the center of the retina and give us the perception of vision and color.

“There’s just nothing left there,” said Frederick Davidorf, professor of ophthalmology and visual science at Ohio State and co-author of a paper describing the case. “The affected areas are devoid of cones.”

Only with the optical scanning system, engineered by Nathan Doble, associate professor of optometry at Ohio State, could scientists count individual cells to see precisely what had happened to the teen’s eyes. Both eyes were damaged, the right more extensively.

The case study is published online in the journal Retinal Cases & Brief Reports and will appear in a future print issue.

The case serves as a cautionary tale about the risk of staring at laser pointers, which both Doble and Davidorf noted often pack much more power than advertised.

It is also the first published report of laser eye damage captured by this specific imaging system, showing how valuable this research equipment can be in understanding the exact extent of damage caused by the laser.

The imaging system can be thought as a powerful microscope that can magnify the view of retinal cells that are equal in size to about 1/20th the width of a human hair. One of the main research goals in Doble’s lab is to utilize such high-resolution imaging systems to detect and monitor various eye diseases such as age-related macular degeneration, diabetic retinopathy and glaucoma.

“It has been described as looking at the retina through a straw,” said Doble, a lead author of the paper. “We can see much more detail than you would see with standard clinical imaging. We do not image large areas of the retina, but the areas we do image are at a much higher level of resolution.”

The 14-year-old boy, not identified in the article, and a friend were playing with pet laser pointers when he stared directly at the laser for several seconds. He described the initial effect as a bright light that limited his vision for several minutes.

By the time he saw Davidorf five months later, the patient said that if he were looking at text with only his right eye, a single letter would be missing, but with both eyes he could not detect any problems. Though he otherwise had 20/25 and 20/20 vision, a standard clinical exam showed lesions in both eyes that were diagnosed as macular laser burns.

The damage came into clearer view when Doble imaged the retinas with his device, called an adaptive optics-optical coherence tomography-scanning laser ophthalmoscope: The two lesions in the right eye and one in the left eye appear as black gaps in a sea of individual cells.

The scope is equipped with a specialized mirror that has been deformed “almost like a funhouse mirror,” Doble said, correcting for the slightest motions—even motion related to the patient’s heartbeat—as the researchers shine light into the eye.

“The mirror allows us to bypass the optics of the aberrations or distortions in your eye and gives us the really sharp image of the back of the eye,” Doble said. Each individual image covers only a small field of view, so the researchers “stitch” images together to see the entire target area of concern.

The high-resolution images are similar to what scientists can see when they view a slice of tissue under a microscope—only in this case, the tissue doesn’t have to be biopsied to be seen up close.

Doble, also an associate professor of ophthalmology and visual science, doesn’t intend to market the scope or make it widely available—it is one of only five known custom-built devices of its kind in the United States. As an optical engineer, his emphasis is producing images that can help increase understanding of eye diseases as they progress.

Most recently, his lab published images of retinal cells called ganglion cells from patients with glaucoma, a disease that damages the optic nerve.

“The ganglion cells are some of the first cells affected by glaucoma, so potentially counting these cells might be a very sensitive measure for this condition,” Doble said. “We can also follow the same patient over time so the potential of new stem-cell or genetic therapies can be evaluated objectively by counting the number of individual cells as the disease progresses.”

In this case study, the researchers scanned the teen’s eyes twice, 11 and 20 months after the injury, and found slight decreases in the size of the lesions over that time period.