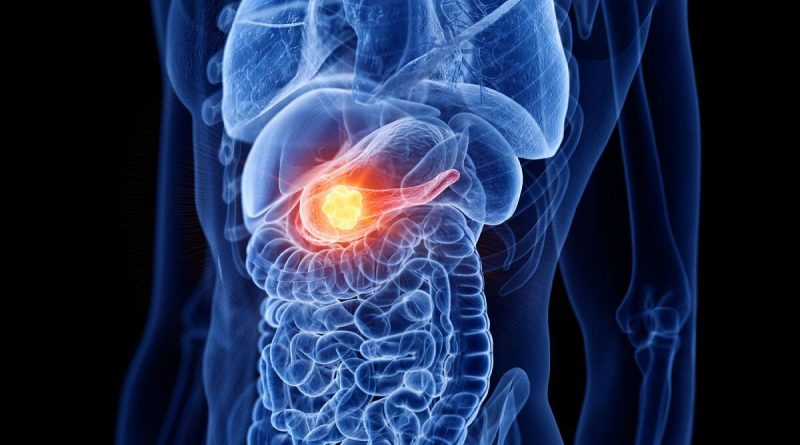 Dr Nighat says aspirin can reduce risks of some cancers

Pancreatic cancer is the most lethal of all cancers, accounting for roughly seven percent of all deaths from the disease. Efforts to improve survival rates are ongoing, but both patients and GPs need to be aware of the signs to make this possible. Pain is a common symptom of cancer, but pain that worsens when lying down or after a meal could be hinting at a tumour growing in the pancreas.

Pancreatic cancer describes a malignant tumour found anywhere in the pancreas, which sits right above the abdomen.

Like many other types of cancer, it is unclear what prompts a tumour to grow in the pancreas.

A major reason patients are diagnosed at a late stage is that the disease often presents vague early symptoms.

The NHS Inform website states: “Pancreatic cancer can cause dull pain in your upper tummy (abdomen), which may spread to your back.

“To begin with, the pain may come and go, but as the tumour becomes larger and more advanced, the pain may be more constant and last longer.”

It adds that “the pain is often worse when you lie down or after you’ve eaten”.

Classic signs of the condition include:

Giulia Guerrini, lead pharmacist from digital pharmacy www.medino.com. said: “Some of the symptoms of pancreatic cancer are fairly common, hence they very often tend to get brushed off.

“These include stomach and back aches, indigestion, unexplained weight loss and a change to bowel habits.

“However, some of the more serious symptoms can include loss of appetite, jaundice and sickness.”

The pharmacists caution that unexplained sickness lasting longer than two days should not be ignored.

“Unexplained diarrhoea for more than seven days or any other symptoms that you’re not sure about, phone 111 to get advice as soon as possible,” notes Guerrini.

Avoiding classic carcinogens like smoking is important for prevention, but other health hazards may also be worth noting.

Having diabetes, a family history of pancreatic cancer and genetic syndrome can all contribute to the disease.

Other risk factors that can be controlled include carrying excess weight, as the risk increases the risk by 10 percent for a five-point increase in BMI.

Recent findings which have identified alarming failures in the detection of the disease are a stark reminder that prevention is better than cure.

The latest research, presented at UEG Week 2022, suggests tumours are being missed on CT and MRI scans, narrowing the window for curative surgery.

According to the figures, almost half (48 percent) of patients examined have signs of the disease that were missed when scans were reviewed by a specialist.

Doctor Nosheen Umar, from the University of Birmingham UK, said: “There is often only a very short period for curative surgery in pancreatic cancer meaning it is vital that patients are diagnosed with the disease as early as possible to give the best chance of survival.

Researchers hope the findings will raise awareness of the reasons early diagnoses are rare, and improve patients’ outcomes for pancreatic cancer in the future.