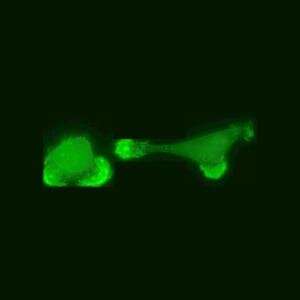 The fact that cells are motile and come into contact with each other is one of biology’s fundamental principles. During embryonic development, cells must communicate with their neighbors in order to find their proper place in the differentiating organism. Wound healing is another process in which direct intercellular interactions are essential. In this context, motility enables cells to migrate to the location of the lesion and regenerate lost structures. Cancer cells also make use of this property to leave their site of origin in the primary tumor, which allows them to initiate the formation of metastatic tumors in other tissues.

“In recent years, biologists and physicists who study motility have mainly focused on investigating how large collectives comprising hundreds or thousands of cells coordinate their movements,” says doctoral student David Brückner. His Ph.D. supervisor Chase Broedersz is Associate Professor of Theoretical Biophysics at Ludwig-Maximilians-Universitaet (LMU) in Munich and the Vrije Universiteit (VU) in Amsterdam. “We wanted to know how pairs of cells interact when they come into contact, and set out to analyze their behavior using the methods of statistical physics.”

To do so, Brückner and his colleagues fabricated a microscopic ‘cage’, which they refer to as a ‘cell collider.’ The use of defined geometries is a popular strategy in studies of cell motlity, but Alexandra Fink, a Ph.D. student in the group led by Joachim Rädler, Professor of Biophysics and the Physics of Soft Matter at LMU, has now applied it in a novel context.

“The idea was to isolate two cells, while permitting them to interact in a restricted fashion,” Brückner explains. This was achieved by placing single cells in each of two compartments that were connected by a narrow channel. This geometry meant that the cells could interact by extending thin membrane projections called protrusions, inevitably leading to collisions. The cell nuclei were labeled fluorescently to enable the movements of both cells to be monitored by fluorescence microscopy, so that the positions of the two could be tracked over time. “Based on the resulting experimental data, we were able to develop a model that provides a physical description of how the cells interact,” says Brückner.

Evasive action on a microscopic scale

The observations revealed that when normal cells come into contact in the cell collider, their protrusions repel each other, and are then fully retracted. “When normal cells make contact, they tend to change direction so as to avoid the obstacle,” says Brückner. This response to initial contact enables the cells to keep their distance from one another. “We were surprised to find that tumor cells behave in a very different way,” Brückner adds.

In almost all cases, the two cancer cells tried to get past each other. With the aid of their theoretical model, the team was able to simulate this response in detail. The analysis revealed that, when two tumor cells approach each other they do not—as one might expect—slow down. Instead, they accelerate to squeeze past one another.

“These findings suggest two interesting approaches for further investigations,” says Brückner. In the next step, the LMU team plan to identify the molecular bases for the very different interactions of the two cell types. Cancer cells are known to differ from their normal counterparts with respect to the sets of proteins exposed on their surfaces. Among them, cadherins—a specific class of proteins that play a vital role in mediating cell adhesion—are of particular interest.