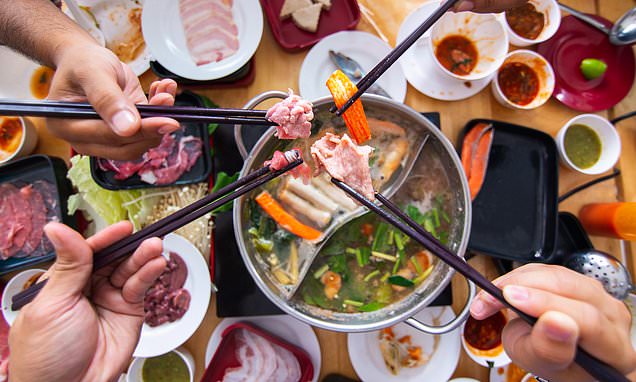 Nine members of the same family in Hong Kong contracted coronavirus after sharing a traditional hotpot meal, officials there said.

On Sunday, Hong Kong confirmed 10 new cases of the infection that’s now struck more than 40,600 people worldwide and killed over 1,000.

All but one of them there were relatives who shared a meal within the last two weeks, the South China Morning Post reported.

The nine relatives and tenth unrelated case confirmed on Sunday bring Hong Kong’s total number of coronavirus infections to 36 – an increase of more than one-third over the previous case count. 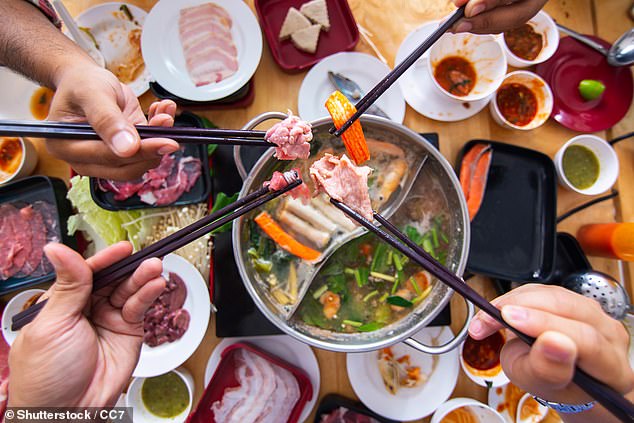 On January 26, 19 members of a Chinese family gathered in Hong Kong to share a meal together in what should have been a pleasant reunion.

Two of the family members had traveled to there from mainland China.

When the group sat down to eat at the Lento Party Room in Kwun Tong, according to South Morning China Post’s reporting, everyone seemed well, or nearly so, with perhaps only mild symptoms of respiratory infection.

But after the dinner, several people started showing clearer signs of sickness.

By Sunday, a 22-year-old male in the family and his grandmother had both tested positive for coronavirus.

The same evening, seven other related guests at the dinner were diagnosed, too.

They included the original patient’s parents, two of his aunts and three cousins, according to the South China Morning Post.

Upon returning to mainland China at the end of the month, one of the two visiting relatives was also diagnosed with coronavirus.

Such a consolidated cluster of infections underlined just how contagious coronavirus can be and emphasized the uphill battle Chinese health authorities face in tracking and controlling the outbreak.

‘We’re facing major difficulties in isolating the suspected cases and tracing those who had close contact with the confirmed patients,’ Dr Chuang Shuk-kwan, head of the communicable disease branch of the Center for Health Protection told the South China Morning Post.

When coronavirus was first identified, it seemed that everyone who contracted it had been to an open-air seafood and wild game market in Wuhan, in mainland China.

But soon it became clear that people were infecting one another – the virus was transmissible between humans.

Early study’s determined that, like most respiratory illness-causing coronaviruses, the infection was communicable through fine droplets of saliva, expelled in a cough or sneeze.

It also shared in common with most viral illnesses that the coronavirus was most contagious when symptoms were most severe, though experts did (and continue to) leave their estimates of the potential incubation period quite wide, at between two and 14 days.

New research published Monday suggests that the coronavirus, currently known as 2019-nCoV is transmissible this way, as well as through stool and urine contact.

Most worryingly, as Dr Chuang noted that evidence increasingly suggests that people who have no or very mild symptoms can transmit the infection.

‘If there are many people who have no symptoms or only mild symptoms, and they have infected many others, then there isn’t much we can do to stop the spread,’ she told South China Morning Post.

This has become a concern for US officials too, who believe the virus is not yet spreading in the American community, but could do so undetected if asymptomatic transmission is occurring.

With 42 total cases in Hong Kong, including the highly concentrated nine family cases from Sunday, it’s beginning to look as though it is spreading in Hong Kong’s communities.

In fact, Dr Chuang is concerned enough to advise Hong Kong residents to avoid these kinds of shared meals and activities.

‘I suggest the public cuts down on these gatherings. If they are necessary, try to reduce the time spent together,’ she said.

With the virus clearly spreading via droplets of saliva, chopsticks could easily be a vehicle for sharing more than tender morsels of meat cooked at the table.

At the same time that the family’s plight was coming to light, World Health Organization (WHO) experts finally arrived in China on Monday, after US officials said Friday that the offer to send in American scientists was ‘still on the table.’

Meanwhile, the first American – one of more than 60 people sickened on the Diamond Princess ship docked in Japan – has died of coronavirus, and the pathogen has spread to more than 40,600 in the world.