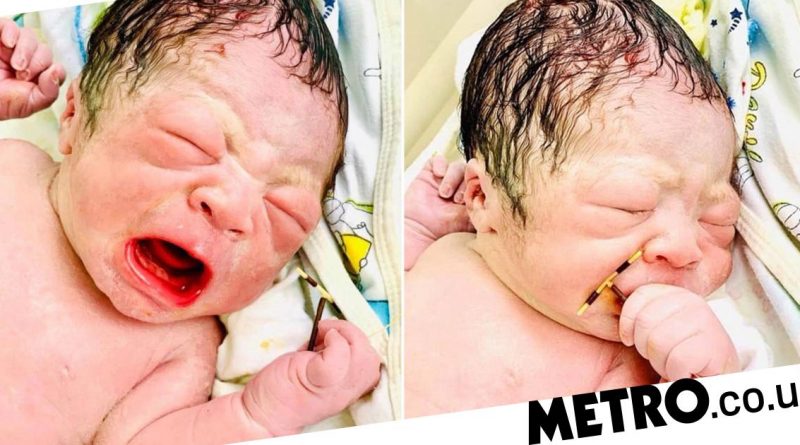 It’s an image to instill deep fear into the hearts of anyone who doesn’t plan to have children: a newborn baby clutching the IUD that failed to stop their mum getting pregnant.

The photo shows a baby boy clutching what reports claim is his mum’s copper coil after his birth at Hai Phong International Hospital, in the city of Hai Phong in northern Vietnam.

VN Express reports that the boy’s 34-year-old mother, who has two other children, had the contraceptive coil inserted two years ago.

Contrary to what you might have seen spread on social media, the baby doesn’t appear to have yanked the coil out – instead the IUD came out at the same time as the baby, who then held the coil as the obstetrician took photos.

Obstetrician Tran Viet Phuong said that the IUD may have failed to prevent pregnancy if it had shifted from its original position, adding: ‘After delivery, I thought him holding the device was interesting, so I took a picture. I never thought it would receive so much attention.’

Thankfully despite being unplanned, the baby arrived healthy, weighing 7lbs. He remains under observation with his mum.

Images of the baby spread rapidly online, with many claiming that the baby was born holding the IUD – which isn’t true.

That claim is a similarly terrifying urban legend to one that spread back in 2017, when, again, photos were shared of a baby holding the intrauterine device that failed to prevent pregnancy.

Again, in this instance it was claimed across social media that the baby had been born holding the coil – as a result of people misinterpreting the mum’s caption she posted alongside the photos of her ‘mirena fail’ and spreading incorrect information through memes.

In actuality, the Mirena coil had moved to sit behind the placenta, and while it did emerge during a C-section, the baby was not born holding the contraceptive form.

While photos and stories such as these are likely to grab attention (and inspire horror), it’s important to note that in the majority of cases, contraceptive methods such as the copper coil are pretty effective.

The NHS states that when inserted correctly, the coil is more than 99% effective in preventing pregnancy.

Important things to know about getting an IUD

The IUD is similar to the intrauterine system (IUS), but instead of releasing the hormone progestogen like the IUS, the IUD releases copper into the womb.

The copper alters the cervical mucus, which makes it more difficult for sperm to reach an egg and survive. It can also stop a fertilised egg from being able to implant itself.