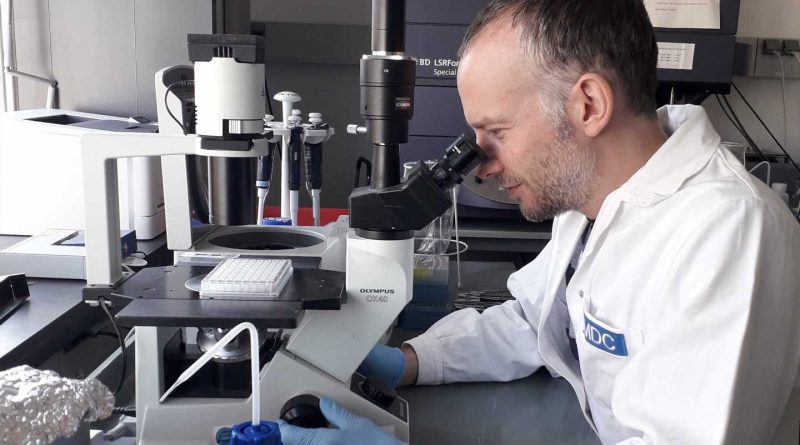 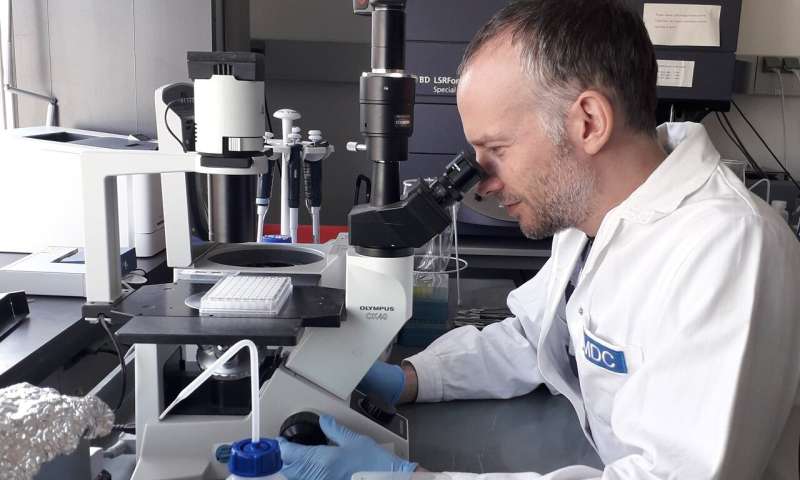 Multiple sclerosis (MS) is known as “the disease with a thousand faces” because symptoms and progression can vary dramatically from patient to patient. But every MS patient has one thing in common: Cells of their body’s own immune system migrate to the brain, where they destroy the myelin sheath—the protective outer layer of the nerve fibers. As a result, an electrical short circuit occurs, preventing the nerve signals from being transmitted properly.

Researchers don’t yet know exactly which immune cells are involved in stripping away the myelin sheath. Autoreactive T and B cells, which wrongly identify the myelin sheath as a foreign body, travel to the brain and initiate the disease. “Up until now, MS drugs have essentially targeted these T and B cells, both of which are part of the acquired immune system,” says Dr. Alexander Mildner, a scientist at the Max Delbrück Center for Molecular Medicine in the Helmholtz Association (MDC) and the senior author of the paper now published in Nature Immunology.

Mildner is currently conducting externally funded research as a DFG Heisenberg fellow in Professor Achim Leutz’s lab at the MDC, which focuses on cell differentiation and tumorigenesis. “But by attacking the acquired immune system, the MS drugs adversely affect the body’s immune memory, thus making patients more susceptible to infections in the long run,” the scientist says.

As a result, Mildner has been pursuing a different strategy for a couple of years now. He wants to find out what role immune cells—particularly those that are part of innate immunity—play in the development of MS and whether they represent a promising target structure for therapy of MS patients. “In an earlier study with a mouse model of MS, we were able to show that disease symptoms in the mice declined significantly within a few days after their monocytes were selectively destroyed by antibodies,” the researcher reports. This result came as a big surprise to him and to many of his colleagues. “Apparently, it is not only T and B cells that are involved in causing tissue damage in MS,” Mildner says.

The monocytes he studied are a special type of white blood cells that shortly circulate in the blood before migrating into tissue. Once there, they transform themselves into effector cells (phagocytes) and destroy foreign tissue in the central nervous system (CNS) – or which, during MS, they wrongly identify as such. “This process,” Mildner says, “leads to inflammation and tissue damage in the brain.” 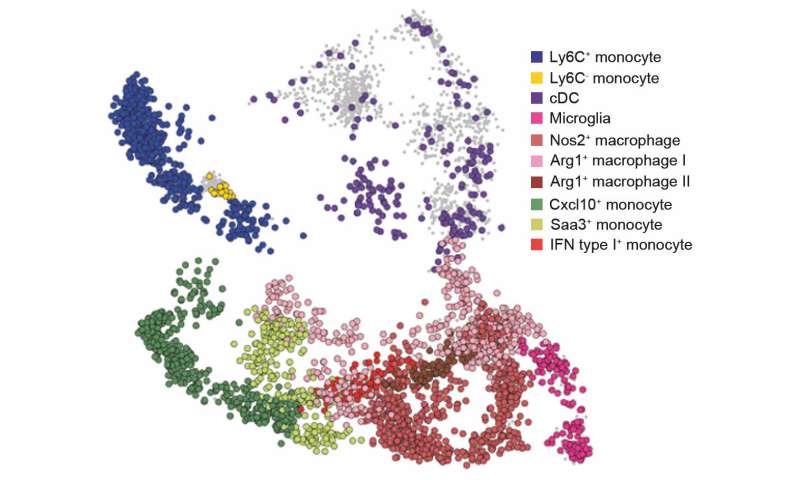 In the current study published in Nature Immunology, which he conducted in collaboration with an Israeli team led by Professor Ido Amit from the Department of Immunology at the Weizmann Institute of Science, Mildner and his team also focused on monocytes. “In recent years, we realized that several types of these immune cells exist, which might carry out different functions,” the researcher says. “We therefore wanted to examine in our mouse model of MS the monocytes in greater detail using single-cell sequencing and to find out, which monocyte subsets are present in the brain in MS and are responsible for tissue damage.”

He and his colleagues identified six monocyte subtypes, four of which were previously unknown. As in his earlier study, Mildner injected the mice with antibodies against a specific monocyte surface protein. As expected, the cells died and the MS symptoms in the mice decreased within a short period of time. “But what surprised us was that the antibodies did not destroy all monocyte subsets in the brain that have this surface protein,” Mildner says.

Not all monocytes destroy the protective myelin sheath

“Only a certain type of monocyte, the Cxcl10+ cells, was destroyed by the antibody treatment,” Mildner says. “These are apparently the cells that are primarily responsible for causing MS tissue damage in the brain.”

With the help of single-cell sequencing, he and his team also discovered that this cell type differs from other monocytes in two essential ways: First, Cxcl10+ cells have a particularly large number of receptors for a signal protein secreted by T cells that induces tissue damaging properties in monocytes. Second, these cells produce large amounts of interleukin-1-beta, a substance that opens the blood-brain barrier, enabling immune cells to more easily pass from the blood to the brain and exacerbate the symptoms. “Our research suggests that T cells, as disease initiators, travel to the CNS in order to lure there the monocytes that are responsible for the primary tissue damage,” Mildner explains.

The other monocyte subsets that were identified, he speculates, are perhaps even involved in repair processes in which the body tries to rebuild the damaged myelin. In light of the study’s findings, he thinks it is also possible that the T and B cells are not even directly involved in stripping away the myelin sheath, but only indirectly in that they prompt the Cxcl10+ monocytes to attack the protective layer of the axons.

Many side effects may be preventable