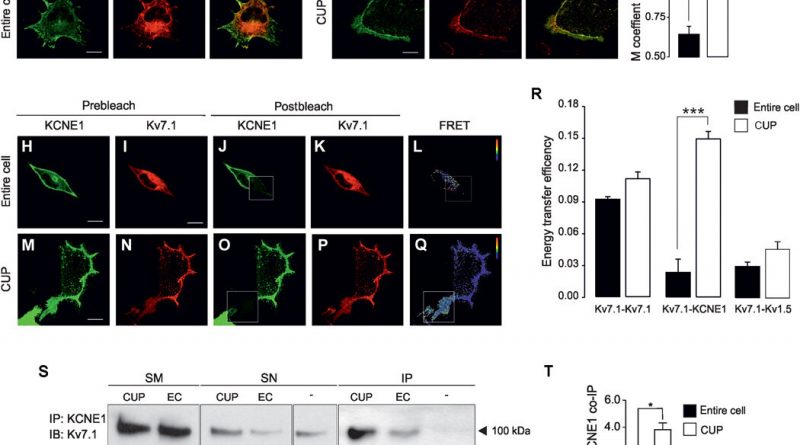 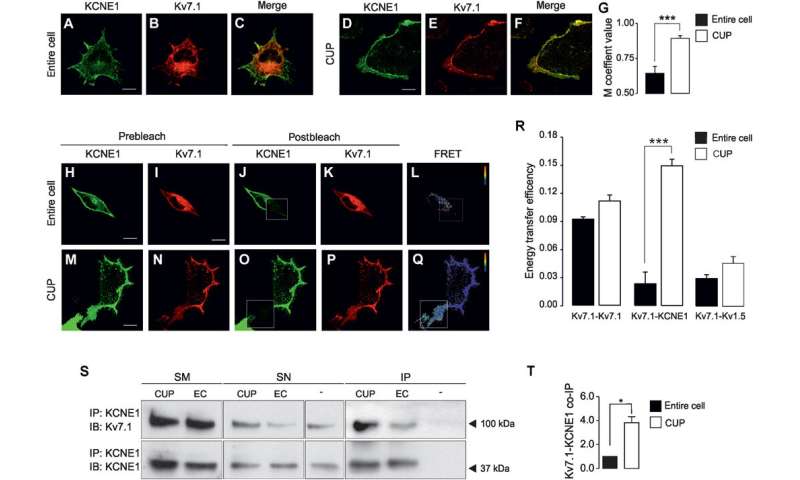 Ionic channels—integral proteins in the cell membrane—are essential in several processes such as cardiac activity, nervous transmission, cell proliferation and the regulation of blood pressure. A study now published in Science Advances describes for the first time the membrane traffic and association mechanisms of the Iks cardiac currents, a flow of potassium ions through ionic channels in the cell membrane that is decisive for cardiovascular function.

These molecular mechanisms related to cardiac physiology have been characterized by a team of experts from the Laboratory of Molecular Physiology of the Faculty of Biology and the Institute of Biomedicine of the University of Barcelona (IBUB), under the supervision of Professor Antonio Felipe, from the Department of Biochemistry and Molecular Biomedicine.

Voltage-gate potassium channels (Kv) regulate the transmission of nervous impulses and the potential of cardiac action through the passing of K ions across the plasmatic membrane that surrounds the cells.

The activity of these potassium channels is fundamental in processes related to synaptic transmission, brain physiology and cardiac action potential. Although its physiological function seems to be clear in electric cells, “its role is uncertain in other type of cells that may be detected,” notes Professor Antonio Felipe.

In particular, the Kv7.1 channel and its regulatory subunit KCNE1 generate the Iks current in the heart, an electrical flow that takes part in the repolarization of the heart tissue and intervenes in the QT interval of the cardiac action potential. When this interval is altered, long or short QT, serious cardiac pathologies can appear, including cardiac arrhythmia and sudden death.

“Knowing the nature and functioning of these proteins is essential to understand, diagnose, and treat these pathologies, which represent a great social impact,” notes Antonio Felipe.

The new study describes how the Kv7.1 channel is placed in the cell membrane through an unknown and unconventional mechanism that involves an alternative route that avoids the classic route of Golgi apparatus, an organelle formed by a system of flattened cisterns in the cell cytoplasm. Also, the regulatory subunit KCNE1 follows a traditional processing mechanism through this cell organelle, which is related to the biosynthesis and transport of essential molecules for cell physiology.

The new study describes how the Kv7.1 (KCNQ1) channel and its regulatory subunit KCNE1 are related in specific dominions of the endoplasmic reticulum, a system formed by a complex network of membranes and related to the synthesis and transport of proteins.

These specialized dominions are located near the cell surface and are contact projections between the endoplasmic reticulum and the cell membrane (endoplasmic reticulum-plasma membrane junctions, ER-PM). ). These cell regions are assembly areas in the Kv7.1 channel (KCNQ1) with its regulatory subunit KCNE1 and are used as a previous step to the translocation of this protein complex to the plasmatic membrane so that this ionic channel develops its essential physiological function.