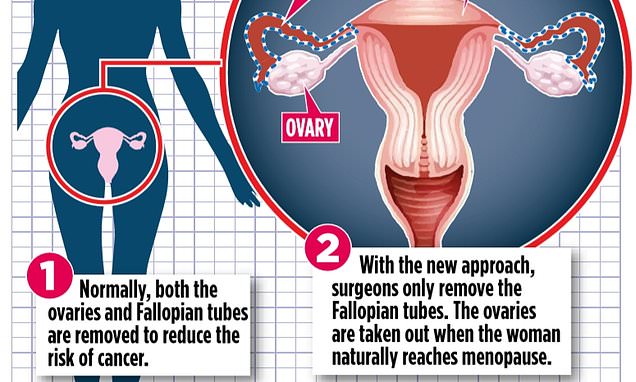 Young women who have surgery to cut their risk of ovarian cancer could now avoid an early menopause, thanks to a new technique that saves the ovaries.

Surgeons first carry out an operation to remove the Fallopian tubes, where many ovarian cancers are thought to start. The operation slashes the chances of cancer in those with a genetic high risk by more than 80 per cent.

But it comes at a cost. The ovaries produce vital sex hormones, and removing them causes women to immediately enter the menopause, triggering symptoms including hot flushes, mood swings and sexual dysfunction. Early menopause is also linked with an increased risk of brittle bones, heart disease, stroke and dementia.

Some women choose to shun surgery, opting to be monitored for any sign of cancer developing in the hope of catching it early. But now a new two-stage approach, which cuts the risk of cancer without side effects, could offer an alternative.

Surgeons first carry out an operation to remove the Fallopian tubes, where most ovarian cancers are found. The ovaries themselves are spared, and taken out years later when the patient naturally reaches the menopause – or earlier if they prefer. 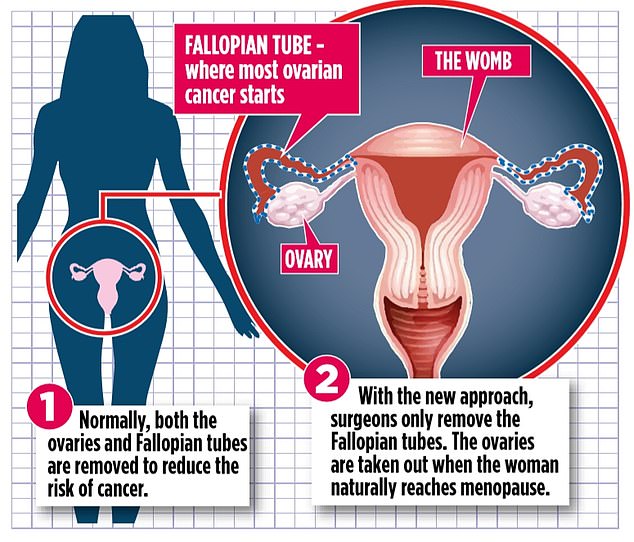 A graphic shows how surgeons first carry out an operation to remove the Fallopian tubes, where most ovarian cancers are found. The ovaries themselves are spared, and then taken out years later when the patient naturally reaches the menopause – or earlier if they prefer

Some 7,500 people are diagnosed with ovarian cancer every year in the UK. One in ten cases occurs in women with a strong family history of the disease, or as a result of genetic faults, including mutations in genes called BRCA1 – famously carried by Hollywood star Angelina Jolie – and BRCA2.

Jolie, whose mother Marcheline Bertrand died with ovarian cancer in 2007, underwent a double mastectomy in 2013. Two years later she had her ovaries and Fallopian tubes removed in a procedure known as a salpingo-oophorectomy. The operation is normally carried out after women have had children, from the age of 35 on, but this can bring the menopause forward by more than a decade.

The new two-stage technique is currently available only as part of the trial, called Protector, which is supported by funding from the Rosetrees Trust and Barts Charity.

Exactly how much the approach cuts the risk of cancer is not yet known. But experts believe it will offer protection and be a better option than no surgery.

‘The current scientific thinking is that a large proportion of these cancers start in the Fallopian tubes,’ says Prof Manchanda.

‘Some women are declining surgery because of early menopause, but we can provide some level of ovarian cancer risk reduction by just taking the tubes out.’

Lisa Anderson, 38, from Woodford Green in North-East London, is one of those taking part in the trial. 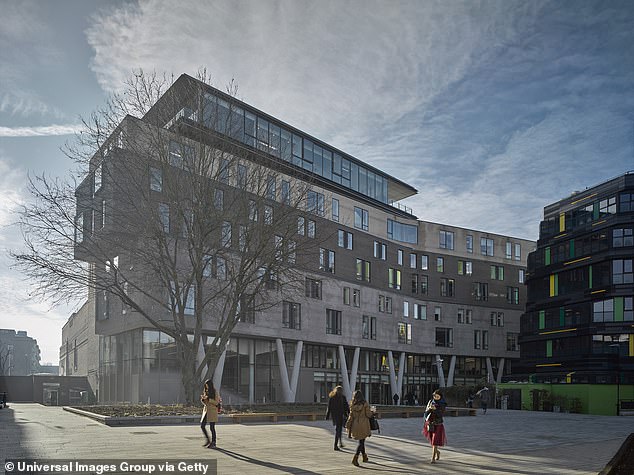 The mother-of-one discovered she had a faulty BRCA1 gene in 2018, after signing up for a separate study offering genetic testing to women. Her paternal grandmother died at the age of 65 from ovarian cancer. She also had breast cancer.

‘I was really frightened at first,’ says Lisa, who works in a children’s hospice and special needs school. ‘I immediately felt – and still feel – like I have a time bomb inside me, not knowing when it will go off.’

Lisa was 36 at the time, and her desire to avoid an early menopause made her opt for the new two-stage approach. ‘I was told that if I went into forced menopause, the hot flushes and other symptoms could have been a lot worse,’ she says. ‘I just thought I had enough to deal with, and I would rather go through it naturally.’

Lisa had the first 45-minute keyhole operation, to remove her Fallopian tubes, in October last year.

She was home the same day and back at work within six weeks. She is being carefully monitored with regular blood tests, which will flag up any sign of cancer. The second operation to remove her ovaries will take place when she nears or reaches the menopause.

While Lisa understands that having her ovaries removed may have merely reduced her risk of ovarian cancer, she is happy with her decision. ‘It was the best option for me,’ she says. ‘Any reduced risk is better than not doing anything at all.’

About 1,000 women are being recruited to take part in the Protector study. Participants must be pre-menopausal, have no desire to have any more children, and have a confirmed genetic mutation which increases the risk of ovarian cancer – including faults in the BRCA1, BRCA2, RAD51C, RAD51D and BRIP1 genes – or a strong family history of the disease.