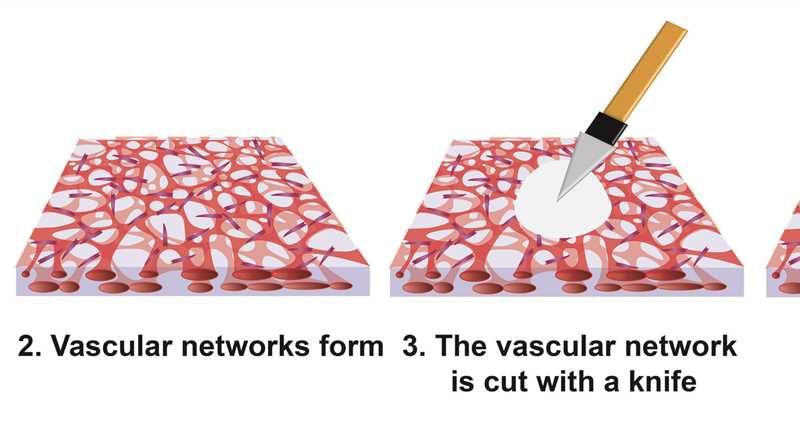 Biomedical engineers developed a technique to observe wound healing in real time, discovering a central role for cells known as fibroblasts. The work, reported in APL Bioengineering, is the first demonstration of a wound closure model within human vascularized tissue in a petri dish.

Prior investigations of wound healing have used animal models, but healing in humans does not occur the same way. One difference is that wounds in mice and rats, for example, can heal without granulation tissue, a type of tissue critical to the healing of human wounds.

The investigators created a wound model by mixing human cells into a gel composed of fibrin and collagen. Blood vessels formed in the gel, producing what is known as vascularized tissue. Two cell types were used: human endothelial cells and fibroblasts, both of which are present in a natural wound.

Fibroblasts are natural fiber-producing cells found in most organs and connective tissue. Endothelial cells form the lining of blood vessels and regulate exchange between the bloodstream and other tissues. When a wound heals, new blood vessels form in a process known as angiogenesis.

Within three days, the mix of cells in the experimental gel had formed a network of capillaries. At this point, the tissues were cut with a diamond dissection knife, producing a wound through the full thickness of the tissue. It took four days for the wound to fully close, but cells were observed migrating into the wound by day 3.

The investigators observed fibroblasts circling the edge of the wound for about 50 hours, when the cells began to close the void. A series of subsequent experiments using varying amounts of fibroblasts and endothelial cells revealed that tissues with endothelial cells alone had not healed even after 10 days.