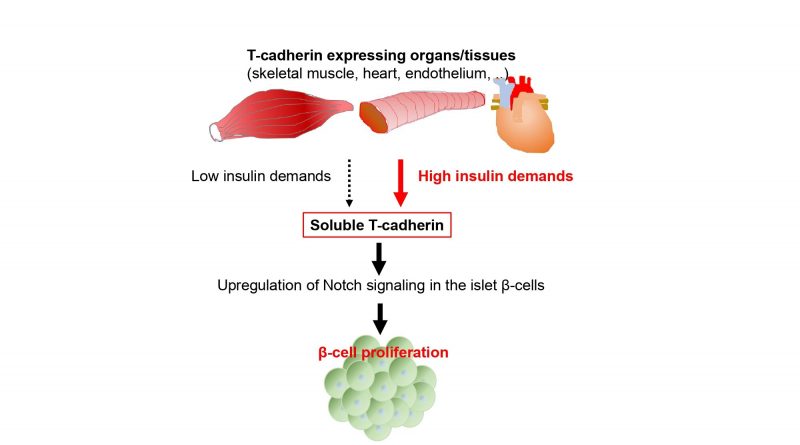 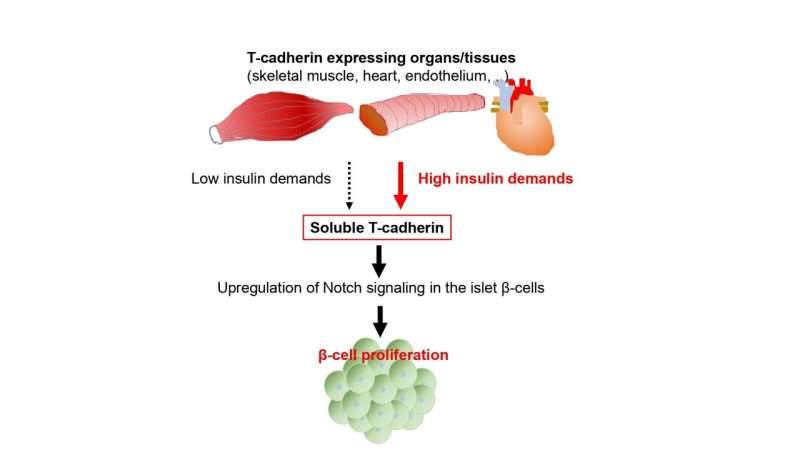 Researchers led by Osaka University have now identified a mechanism by which a lack of insulin may be reported back to the pancreatic cells that produce insulin, identifying a potential new therapeutic target for diabetes.

Type 2 diabetes is estimated to affect over 400 million people worldwide, and yet insulin regulation in the body is still not fully understood. Type 2 diabetes occurs when the pancreas is unable to supply sufficient insulin, the hormone that controls sugar use and storage, to meet physiological demands. The cells in the pancreas that make insulin, known as β cells, can usually proliferate to increase their numbers if the body’s demand for insulin is not being met. However, it is unknown what factors are released from the insulin-receiving tissues or cells to signal the lack of insulin to the pancreatic β cells.

In a study published in iScience, researchers found that a molecule called T-cadherin may be involved in providing feedback to the insulin-producing pancreatic cells and controlling their proliferation.

T-cadherin is usually present on the cell surface and is best known as the binding partner for a molecule called adiponectin—a factor secreted specifically by cells that store fat. However, the researchers showed that T-cadherin is also secreted in previously undescribed soluble forms and can act as a humoral factor, i.e., a molecule transported through the circulatory system.

They not only recognized that T-cadherin responds to insulin deficiency but also demonstrated that mice that were genetically engineered to lack T-cadherin had an impaired glucose tolerance when fed with a high-fat diet.

“We then used artificially synthesized T-cadherin to treat isolated mouse pancreatic islets, which are parts of the pancreas that contain β cells,” explains senior author Iichiro Shimomura. “This treatment promoted Notch signaling in the mouse islets, which could in turn induce β-cell proliferation.” These findings indicate that T-cadherin could be applied in the fundamental treatment of diabetes.