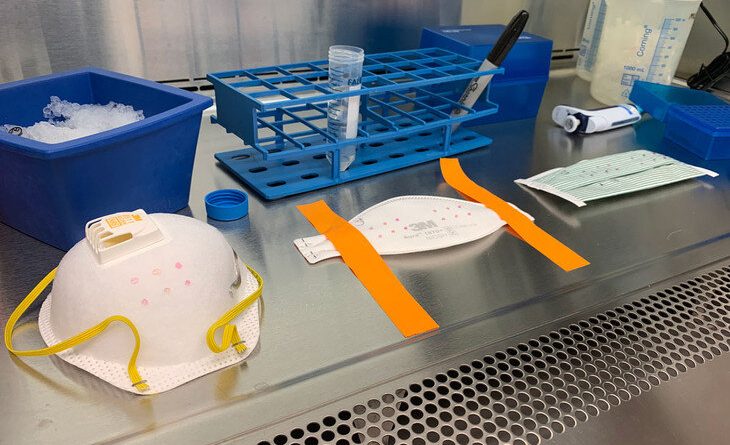 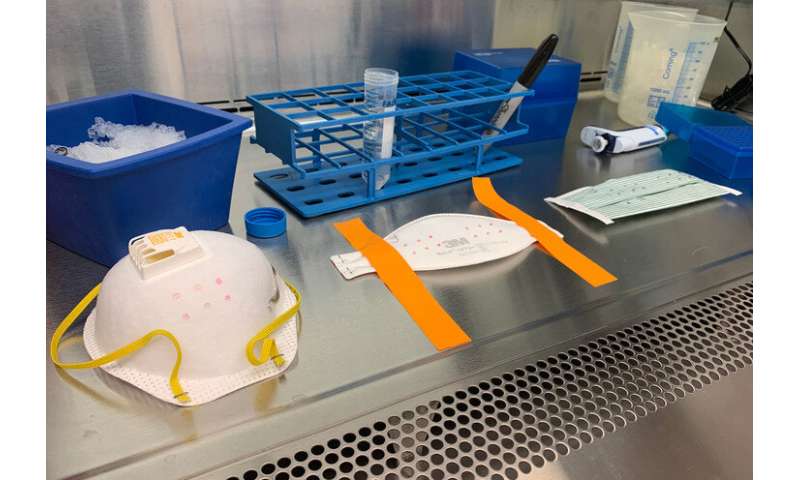 The COVID-19 pandemic has created a shortage of personal protective equipment, including “N95” face respirators, needed by frontline healthcare providers. A new protocol using aerosolized hydrogen peroxide to decontaminate N95 respirators could allow them to be safely reused in some hospital settings, where the disinfectant is already being used for other decontamination purposes. The protocol, optimized by a team of Penn State researchers, inactivates viruses with no indication that the respirator is deformed or damaged over ten decontamination cycles, as reflected by rigorous respirator fit-testing.

Respirators, a type of mask designed to seal tightly to the wearer’s face, are frequently used to provide protection from airborne infectious particles like viruses. Unlike other hospital equipment that have established decontamination protocols, N95 respirators were not intended for reuse. However, the current COVID-19 pandemic has led to a shortage of N95 respirators, resulting from limitations in both manufacturing and supply chains due to increased demands.

“Vapor-phase and aerosolized hydrogen peroxide is routinely used in containment laboratories to decontaminate sensitive equipment and large, pre-cleaned spaces,” said Melissa James, facility manager for the Eva J. Pell ABSL3 Laboratory for Advanced Biological Research at Penn State. “Many facilities use high concentrations (35%) of hydrogen peroxide in these processes, however newer technology allows a relatively low concentration (7%) to achieve the same high level of decontamination. We investigated expanding the use of this technology to decontaminate N95 respirators, which are typically used once and discarded.”

The researchers inoculated five common models of N95 respirators with three types of virus: herpes simplex virus 1 (HSV-1), coxsackie virus B3 (CVB3), and the Pseduomonas phi6 bacteriophage. Ongoing work on this project will utilize influenza virus and the SARS-CoV-2 pathogen itself.

“We chose these viruses in part because we could test a highly concentrated sample of each within a biosafety level 2 facility,” said Moriah Szpara, associate professor of biology and of biochemistry and molecular biology at Penn State. “Hydrogen peroxide treatment demonstrated highly effective decontamination of these viruses. While we plan to do a confirmation study with SARS-CoV-2 in the future, we will need to transition into a biosafety level 3 facility in order to work with it at the high concentrations used for the other human-infecting viruses in this study.”

The researchers found that all of the tested viruses within the respirators were destroyed by aerosolized hydrogen peroxide decontamination, indicating that their protocol is effective. The decontamination protocol also destroyed highly-resistant Geobacillus stearothermophilus spores in an easy-to-use commercial test, which is commonly used in laboratories and hospitals to confirm sterilization. This suggests that these spore tests are a good indicator of successful aerosolized hydrogen peroxide respirator decontamination in hospital settings, where full viral studies are often not feasible.

“The viruses we studied represent a range of human viral pathogens, with different types and sizes, genome types and lengths, and environmental stability,” said Szpara. “Each shares one or more common characteristic with SARS-CoV-2, which allowed us to test the decontamination potential of aerosolized hydrogen peroxide against a range of pathogens and against the characteristics of SARS-CoV-2.”

“To ensure that respirators were effectively challenged between decontamination cycles, we performed both qualitative and quantitative fit testing following the Occupational Safety and Health Administration (OSHA) protocols,” said Hans Derr, manager of health and environmental programs at the Penn State’s Office of Physical Plant, Department of Environmental Health and Safety. “Each fit test involves a number of exercises to challenge fit and to indicate or measure potential leakage. Adequate numbers of fit tests were performed to ensure high levels of confidence and reliability in testing.”

The researchers reported their initial results in a paper appearing today (April 22) on the pre-print server, medRxiv. Next, they plan to extend their testing through 15 decontamination cycles, to perform additional viral decontamination tests using influenza and SARS-CoV-2, and to conduct separate respirator filtration efficiency tests, to further validate respirator integrity following decontamination.