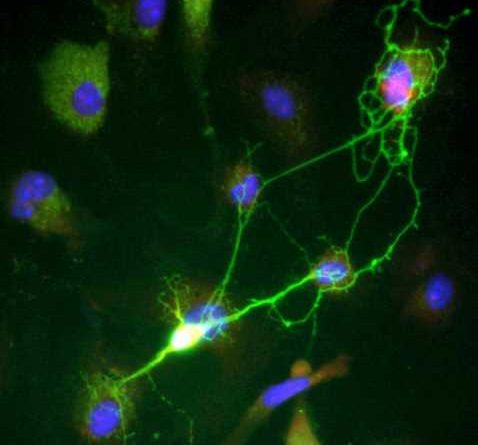 An international collaboration led by Vanderbilt researchers has found that a novel form of brain cell communication may influence brain function. The discovery was uncovered by Natalí L. Chanaday, postdoctoral scholar, A. Alejandro Vilcaes, assistant professor at the Universidad Nacional de Córdoba in Argentina and Ege T. Kavalali, professor and William Stokes Chair in Experimental Therapeutics as well as the acting chair of the department of pharmacology.

For the first time, researchers have been able to understand how synaptic proteins that are transported via extracellular vesicles—signaling particles that contain lipids and proteins—can impact neuronal function, including what happens when neurons age and lose the ability to communicate.

The article describing the research, “Interneuronal exchange and functional integration of synaptobrevin via extracellular vesicles,” was published in the journal Neuron on Jan. 28.

EVs allow the exchange of synaptic vesicle proteins, which could modify the protein composition and signaling properties of target brain cells, or neurons. Healthy cells regularly release them in a process similar to sweating, and much like the small water orbs our skin releases when we perspire, released EVs resemble bubbles. These tiny membrane-bound bubbles have a phospholipid bilayer border covered in surface proteins. Studying these EV secretions provide researchers insight into the inner workings of the mother cell that carries a cargo of proteins, DNA and RNA. Studying this cargo helps researchers understand the cells the EVs came from.

The researchers were tracking specific proteins in the EVs with live-fluorescence imaging and by observing their electrical properties. “It was new to use the extracellular vesicles as a tool to deliver fluorescent synaptic proteins,” Vilcaes said. “Under the microscope, we followed them around in the neurons that incorporated the EVs, and monitored if they were going to synapses and participating in neurotransmission. Nobody has delivered fluorescent synaptic proteins to neurons in this way before.”

With this new approach, the researchers found that neurons that incorporate EVs have an increase in neurotransmitter release, a process necessary for proper brain function. By isolating EVs, the researchers also found that they contain synaptic-vesicle-associated proteins, specifically synaptobrevin (syb2). Syb2 is recruited to EVs via the protein molecule CD81 and is incorporated into functional synaptic vesicles in the target neuron. They also found that EVs can rescue spontaneous neurotransmission in syb2 knockout neurons.

“The facts that the vesicles have these syb2 proteins and the syb2 can go to synapses and increase neurotransmission were very surprising,” Chanaday said. “That was not the initial goal of the project; neurons normally have syb2. But when we added just a little more using EVs, it was surprising that having extra numbers increases neurotransmission and communication.”

Because there is research supporting the fact that syb2 decreases with age, they wonder if adding back the proteins might help restore neurotransmission during aging. Chanaday painted a picture describing the team’s future research directions: “We have billions of cells in our brain. Imagine that with aging some of the neurons start to degenerate, losing proteins and functionality. But some other neurons will be fine; not all the neurons go bad. We could speculate that maybe the neurons that are healthy can secrete healthy proteins in these EVs that can be incorporated by not-so-healthy neurons. Possibly, this could be a buffering mechanism to maintain the brain working for a little bit longer.”

Related to this hypothesis, they would also like to study specifically how EVs are made and secreted and if the lipids in the membrane of the EVs also transfer any kind of information.