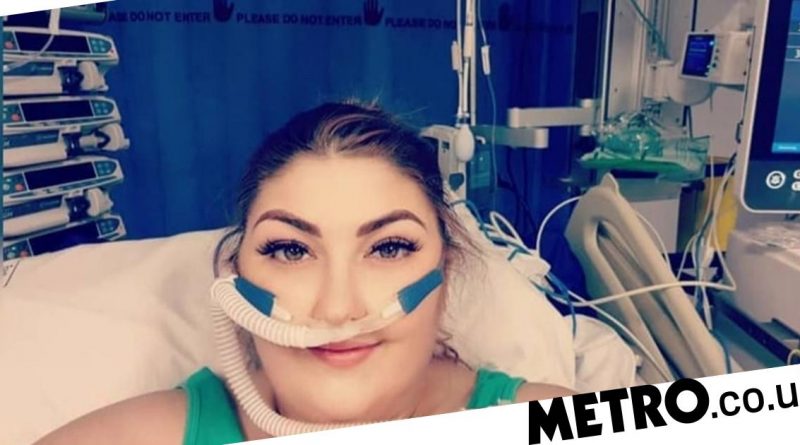 The former manager assumed the sickness and recurring strep infections were due to being recently pregnant and run-down – but an X-ray revealed multiple tumours on her lungs.

Joanna, from Haslingden, Lancashire, will receive maintenance chemotherapy for the rest of her life to manage the disease.

She is sharing her story to raise awareness of lung cancer and to show others that it can happen to anyone and is not always linked to smokers.

She said: ‘It is hard being ill whilst pregnant for the first time as you don’t know what pregnancy is supposed to feel like.

‘I was sick throughout, but at three months I kept suffering with ear and throat infections which led to chest infections, so I began to fear something wasn’t quite right.

‘There were times when I didn’t want to make a fuss because I didn’t want the doctor to think I am a nuisance, but I had to get antibiotics because the infections wouldn’t go away.’

Since Joanna was 13 weeks pregnant, her voice has been ‘hoarse’ – a common symptom of lung cancer as the tumours press on the laryngeal nerve and affected the vocal cords.

Joanna attended the doctors monthly for 15 months until she received an X-ray which found a mass initially diagnosed as pneumonia. At this point her baby Freya was just four months old.

Then, two months later, doctors confirmed that the mass had grown, and it was later revealed that she had lung cancer.

She adds: ‘I was confused by the pneumonia diagnosis as I felt the best I had felt in months so I assumed I had a weak strain of it.

‘Although I had symptoms of cancer such as a sore chest, hoarse voice and infections. I never thought I had it!

According to the NHS website, There are usually no signs or symptoms in the early stages. Symptoms of lung cancer develop as the condition progresses.

The main symptoms of lung cancer include:

If you have any of these, you should see a GP.

‘I struggle to remember what my normal voice sounds like.

‘It went a million miles per hour when they discovered the mass had got bigger and later established it was incurable ALK-positive lung cancer, which is a genetic mutation that causes the cells to grow abnormally.’

She admits feeling ‘naive’ as she believed lung cancer only occurs in smokers.

She says: ‘It is engraved into society that smoking kills and people tend to think they’ll be alright if they are non-smokers, but I am living proof that it can affect anyone.

‘The first thing someone asks me is ‘did you smoke?’ when they find out, but this isn’t the case – if you have lungs, then you can get lung cancer.’

Joanna praises her fiancee Daniel Jonathan, 30, and Freya for being her ‘biggest motivator’.

She remains positive throughout her journey and hopes to help educate people so they can spot the signs before it is too late.

‘I am determined to see Freya’s first day and last day at school, her university graduation and get married.

‘I don’t know how long I have got but I refuse to believe it isn’t a long time.’

Do you have a story?