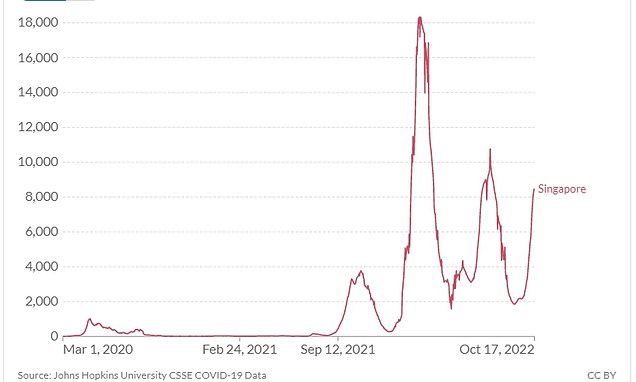 A new Covid variant that is feared to be the ‘most vaccine-resistant yet’ has sent case numbers soaring in Singapore — and it is already in the US.

The mutant strain — dubbed XBB — is another spin-off of the Omicron variant and has been blamed for Singapore’s infection numbers doubling in the past fortnight.

It has accumulated mutations in its receptor binding domain, a key part of the spike protein where virus-fighting antibodies dock and block infections.

Changes to this spot make the virus less recognizable to the immune systems of people who are vaccinated or have been infected with Covid previously.

Sounding the alarm over the new variant, Johns Hopkins University’s Dr Amesh Adalja said: ‘It is likely the most immune-evasive [to date].’

But there is no evidence that it is more likely to cause severe disease or death compared to its parent or sister strains – which have all proven to be mild for most.

Just two people are dying in Singapore per day from Covid, figures show.

While in the past there have been just one or two dominant global variants, the virus now appears to have splintered into a swarm of closely-related sub-variants.

They all derive from the Omicron strain which sent worldwide case numbers to record highs and they all contain similar mutations.

Just last months, scientists were worried about BA.275, which took off in South Asia. In the US, the BA.4.6 and BF.7 sub-strains have been slowly growing.

And in recent weeks, BQ1.1 started to take off in Europe, and looks like the frontrunner to become the continent’s dominant strain this fall. 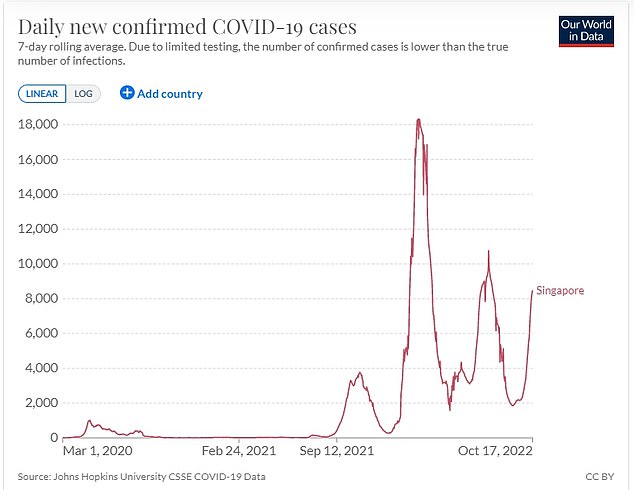 Around 8,000 people are being infected with Covid per day in Singapore and XBB has been blamed for the sharp rise 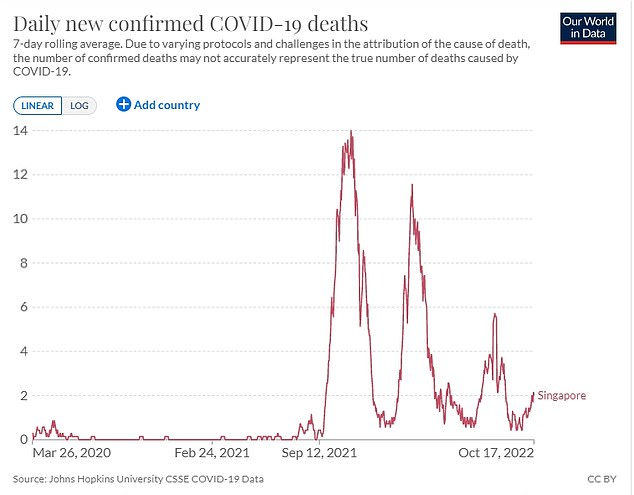 But just two people are dying from the virus, suggesting it’s just as mild as the newer Omicron spin-offs that have become so prevalent 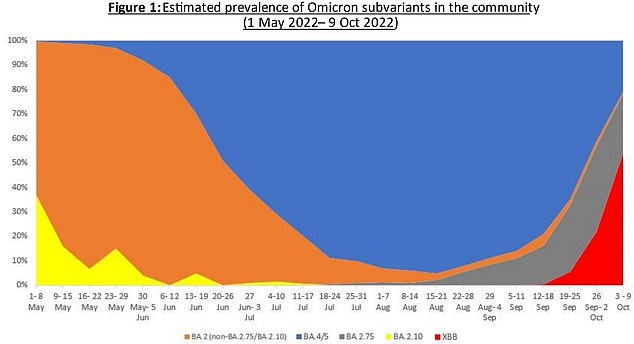 The above graph shows the proportion of cases in Singapore by variants. It reveals that XBB (red) has been surging in the country 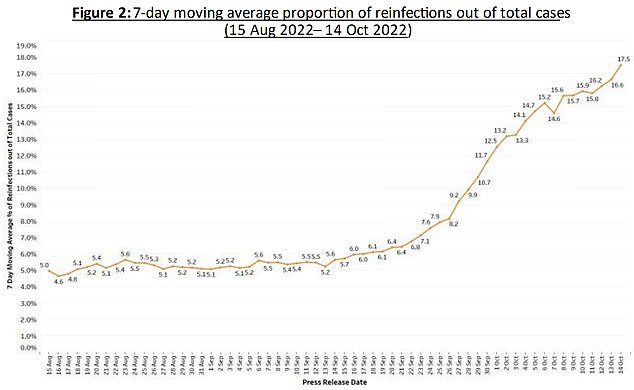 This graph from Singapore’s health authorities show how cases in the country have continued to rise in recent weeks. Data shows they doubled in a fortnight 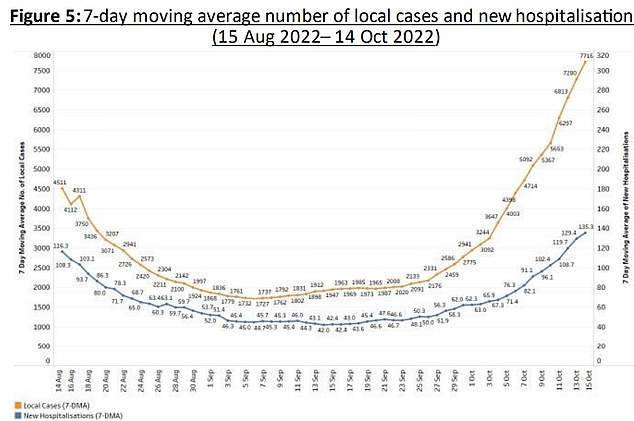 This graph shows Covid cases in Singapore as a seven-day average (yellow line) and hospitalizations (blue line). Scientists say admissions are rising ‘proportionally’ and there is no sign that the variant is more likely to cause sever disease than previous ones

Not everyone needs to get an annual Covid booster, the head of pharma giant Moderna has admitted.

But since the booster rollout in September, uptake has been sluggish, with less than one in 20 eligible Americans taking up their Omicron-specific shot.

Roughly 14.8million Americans have now received the updated booster, out of 215million eligible.

Pfizer recently joined forces with Marvel for a PR campaign specifically targeted at children to encourage them to get the booster shot.

Moderna’s CEO Stéphane Bancel made the comments during Yahoo Finance’s 2022 All Markets Summit while discussing the future of Covid shots.

He said it was ‘very important to think about’ whether or not to get Covid boosters.

Mr Bancel said: ‘I think it’s going to be like the flu. If you’re a 25-year-old, do you need an annual booster every year if you’re healthy?

So far, at least three infections of XBB have been spotted in the US and 16 other nations including Australia, India and the UK.

Singaporean scientists estimate it is 30 per cent milder than the previously dominant BA.5 Omicron strain.

‘XBB’ is formed of two variants scientifically named BJ.1 and BA.2.75 which have merged.

It was first detected in India back in August, authorities said, but did not spark a wave until now.

Covid variants can merge — in a process scientifically known as recombination — if they infect the same cell in the same person at the same time, and then swap genes.

There have been several recombinant variants already — such as ‘Delta-plus’ last year — but none have led to a major surge in infections.

Instead, most quickly die out because the merger has left them less infectious than their rivals.

But XBB appears to be the most successful yet, and is behind 54 per cent of infections in Singapore, up from 22 per cent a week ago.

One possible cause for concern is that Singapore’s reinfection rate has risen dramatically since the arrival of XBB – from 12 to 17.5 per cent of all cases.

It is not clear yet if this is simply due to waning vaccine protection.

But officials already expect the wave to peak in mid-November, making it a short and steep – but crucially mild – wave.

It comes as America struggles to turbo-charge its winter vaccination drive despite warnings of another Covid wave.

The US is currently rolling out a bivalent vaccine to all over-5s, which is designed to protect against Covid variants BA.5 and BA.5.

It is unclear whether it will also protect against XBB, although scientists say it will still help to refresh people’s immunity.

Just six per cent of people who are eligible have come forward so far, a month after the program started.

Last week eligibility was expanded from over-12s to over-5s, with American health chiefs saying they should also get jabs.