Home » Health News » Microplastics and Health Risks: What Do We Really Know? 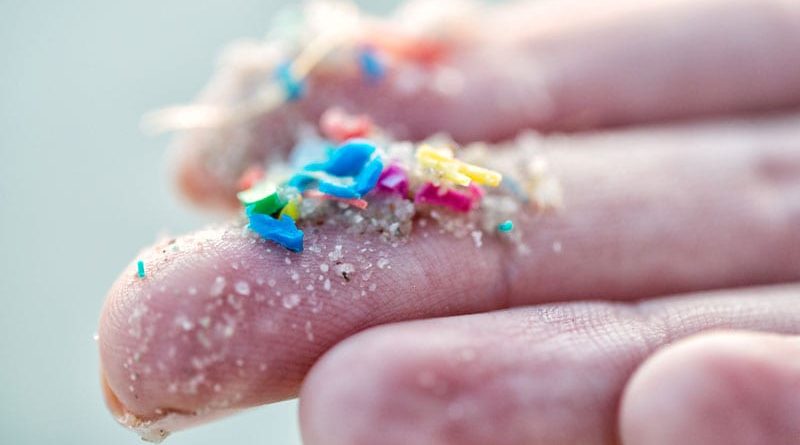 You eat a credit card’s worth of plastic in a week. That may bother you. But does it harm you?

The answer depends on who you ask. Awareness of microplastics in general is certainly increasing; the most recent news is the detection of microplastics in human breast milk. Other research has suggested that we may be consuming up to 5 grams of plastic each week from our food, water, and certain consumer products.

The World Health Organization has been releasing reports on microplastics and human health since 2019. Their most recent report was released in late August 2022.

“Although the limited data provide little evidence that nano- and microplastic particles have adverse effects in humans, there is increasing public awareness and an overwhelming consensus among all stakeholders that plastics do not belong in the environment, and measures should be taken to mitigate exposure,” the WHO said at the time.

The WHO can’t go beyond what the data shows, of course. If microplastics are wreaking long-term havoc in our bodies as we speak, science hasn’t connected the dots enough to definitively say “this is the problem.”

But some researchers are willing to speculate — and, at the very least, the risks are becoming impossible to ignore. Dick Vethaak, PhD, a microplastics researcher and emeritus professor of ecotoxicology at Vrije Universiteit in Amsterdam, Netherlands, is blunt, calling them “a plastic time bomb.”

Every piece of plastic that has ever been created is still on our planet today, apart from what has been burned. Past estimates show we only recycle about 9% of all plastic, leaving 9 billion tons in our landfills, oceans, and ecosystems. For context, that amount is 1,500 times heavier than the Great Pyramid of Khufu.

New data is even more dire. A 2022 report from Greenpeace showed a 5% U.S. recycling rate in 2021, with a large portion of what consumers think of as “recycled” still winding up in garbage piles or bodies of water.

And this plastic doesn’t disappear. Instead, it breaks down into smaller and smaller pieces known as microplastics and nanoplastics.

Microplastics have been confirmed in human blood, lung tissue, colons, placentas, stool, and breast milk. But how they impact our health is still unknown.

To assess risk, we must ask, “How hazardous is the material?” says Flemming Cassee, PhD, professor of inhalation toxicology at Utrecht University in the Netherlands and co-author of the WHO’s recent microplastics report.

There are three potential hazards of microplastics: their physical presence in our bodies, what they’re made of, and what they carry. To determine the extent of these risks, we need to know how much we’re exposed to, says Cassee.

The first initiative to research the impact of microplastics on human health came from the European Union in 2018. Although microplastics were around before then, we were unable to detect them, says Cassee.

That’s the real problem: Since the evidence is so new – and there hasn’t been enough of it — it’s not yet possible to draw definite conclusions.

“But looking into the future, I believe that we are likely facing a public health emergency,” warns Vethaak.

What, Exactly, are Microplastics?

Microplastics are plastic particles between 5 millimeters and 100 nanometers in diameter, or the width of a pencil eraser and something 10 times thinner than a human hair. Anything smaller than that is known as a nanoplastic.

“Primary” microplastics are manufactured to be small and used in things like cosmetics and paints. “Secondary” microplastics result from the breaking down of larger plastic materials, like water bottles and plastic bags.

Secondary microplastics are more diverse than primary microplastics and can take forms ranging from fibers shed from synthetic clothing (like polyester) to pieces of a plastic spoon left in our rivers, lakes, and oceans. Any plastic in the environment will eventually become a secondary microplastic as natural forces such as wind, water currents, and UV radiation break it down into smaller and smaller pieces.

Plastic is a diverse material. Heather Leslie, PhD, senior researcher in Vrije Universiteit’s Department of Environment and Health, likens it to spaghetti with sauce. The noodles are the long polymer backbone that all plastic shares. The sauces are “the pigments, the antioxidants, the flame retardants, etc., that make it functional,” she says.

There are more than 10,000 different chemicals, or “sauces,” used to alter a plastic’s physical characteristics—making it softer, more rigid, or more flexible, says Hanna Dusza, PhD, of the Institute for Risk Assessment Sciences at Utrecht University.

As plastics degrade and become microplastics, these chemicals likely remain. Recent research has shown that microplastics leach these chemicals locally in human tissues, or other areas of accumulation, says Dusza. Some 2,400 of the 10,000 chemical additives were classified as substances of potential concern, meeting the European Union’s criteria for persistence, bioaccumulation, or toxicity.

Many of these chemicals also act as endocrine-disrupting compounds, or toxicants that imitate hormones when they enter the body. Hormones are active at very low concentrations in your bloodstream, explains Leslie. To your body, some chemical additives in plastic resemble hormones, so the body responds.

“Sometimes even a low dose of some of these additives can cause unwanted effects,” says Leslie.

Bisphenol A (BPA), for example, is one of the more infamous endocrine disruptors. It is used as an additive to make plastics more rigid and can be found in any number of plastic products, though areas of concern have been plastic water bottles, baby bottles, and the protective coatings in canned foods.

BPA may mimic estrogen, the female sex hormone essential for reproduction, neurodevelopment, and bone density. In men, estrogen regulates sperm count, sex drive, and erectile function. BPA exposure has been linked with – but not proven to cause – multiple cancer types, ADHD, obesity, and low sperm count. Most everyone has some amount of BPA circulating within their blood, but microplastics may retain BPA as they degrade, potentially increasing our exposure, leading to its unwanted consequences, says Dusza.

And BPA is just one of those 2,400 substances of “potential concern.”

A potentially larger health issue emerges from our bodies yet again doing what they are supposed to do when encountering microplastics. Particles can trigger an immune response when they enter your bloodstream, explains Nienke Vrisekoop, PhD, assistant professor at UMC Utrecht in the Netherlands.

White blood cells have no issue breaking down things like bacteria, but microplastics cannot be degraded. When a white blood cell engulfs a certain mass of microplastics — either many small particles or a singular large one — it dies, releasing its enzymes and causing local inflammation.

“This triggers continual activation that can result in various adverse effects, including oxidative stress and the release of cytokines that trigger inflammatory reactions, says Vethaak.

“The smallest particles – less than one-tenth of a micrometer — penetrate deep into the lungs and even into the bloodstream, causing damage to the heart, blood vessels and brain,” says Vetaak. “The only direct evidence comes from workers in the textile and plastic industries that had been exposed to very high amounts of plastic fibrous dust.”

Microplastics can also pick up harmful substances and deliver them into your body.

“When they’re in an environment, they basically can suck up [chemicals] like a sponge,” says Dusza. “These chemicals are known environmental pollutants, like pesticides, fluorinated compounds, flame retardants, and so on.”

Once in the body, these chemicals can be released, potentially leading to cancer, chronic inflammation, or other unknown effects.

Particles can also act as a vector for microbes, bacteria, and viruses. A September 2022 study found that infectious viruses can survive for 3 days in fresh water by “hitchhiking” on microplastics. Their porous nature provides microbes with a perfect environment in which to live and reproduce, says Dusza. If you ingest the plastics, you ingest the microbes.

How to Minimize Exposure

There is no way to avoid microplastics. They’re in the air we breathe, the products we use, the water we drink, and the food we eat.

Danopoulos reviewed 72 studies to quantify our consumption of microplastics in drinking water, salt, and seafood.

“We are exposed to millions of microplastics every year, and I was only looking at three food sources, so there are really a lot more,” he says. “Once plastic waste is mismanaged and it enters the environment, there is very little we can do to extract it.”

That said, we can take steps to lower our exposure and keep the problem from getting worse.

Water filtration is one option, though it is not perfect. Research has shown that municipal water treatment can be effective. An October 2021 study found that two methods — electrocoagulation-electroflotation and membrane filtration — can be 100% effective in removing microplastics from treated water. The problem? Not all municipal water treatment uses these methods – and you would have to investigate to find out if your locality does.

As for at-home filtration methods, they can be effective but can also be dicey. Some consumer brands claim they remove microplastics, but how well depends on not just the type of filter but the size of the particles in the water. Meanwhile, how do you know if a filter is working on your water without testing it, something few people will do? Best not to take a brand’s claims on face-value, but look for independent testing on at-home brands.

A longer-term project: Reduce our risk by reusing and recycling plastic waste. Limiting our consumption of plastic, especially single use plastic, decreases the amount available to become micro- and nanoplastics.

We must all learn to not treat plastic as waste, but rather as a renewable material, says Cassee. But if that seems like a tall order, it’s because it is.

“You’re a human being and you have a voice and there are a lot of other humans out there with voices,” says Leslie.

“You sign a petition in your community. You talk about it with your friends at the pub. If you’re a teacher, you discuss it in your class. You call your elected representatives and tell them what you think and how you want them to vote on bills.”

When people start working together, you can really amplify that voice, says Leslie.

Numerous sources have declared microplastics do not impact human health. But that’s largely because no direct evidence of this exists yet.

Even the WHO in its report suggests that progress must happen if we’re to fully understand the scope of the problem.

“Strengthening of the evidence necessary for reliable characterization and quantification of the risks to human health posed by NMP (nano- and microplastics) will require active participation by all stakeholders,” it says.

All researchers interviewed for this article agree we don’t have enough evidence to draw any definite conclusions. But “if you look at the wrong endpoints, things will look safe, until you look at the endpoint where it’s really causing the problem,” says Leslie.

We must research our blind spots and continually ask, where could we be wrong?

Perhaps the question to be asked, then, is the hardest to answer: Are we willing to wait for the science?