A man whose colon cancer spread to one of his testicles reportedly ended up in the bizarre situation because of a traumatic kick to his groin 20 years earlier.

The 53-year-old, who has not been named, had to have his testicle surgically removed while having chemotherapy for his bowel cancer.

Doctors in Iowa City found the mass during scans after the patient reported a lump on his scrotum.

The lump had been there ever since the man was kicked by the mule at the age of 33, but he said it had grown rapidly in the past year.

Surgeons found the tumour was mostly on the man’s epididymis – the tube that transports sperm out of the testes.

It is ‘normal’ for colon cancer, also known as bowel cancer, to spread around the body through lymphatic vessels, parts of the immune system which run throughout the body.

Extremely ‘unusual’ cases of the cancer spreading like this have only been reported five times in medical literature. 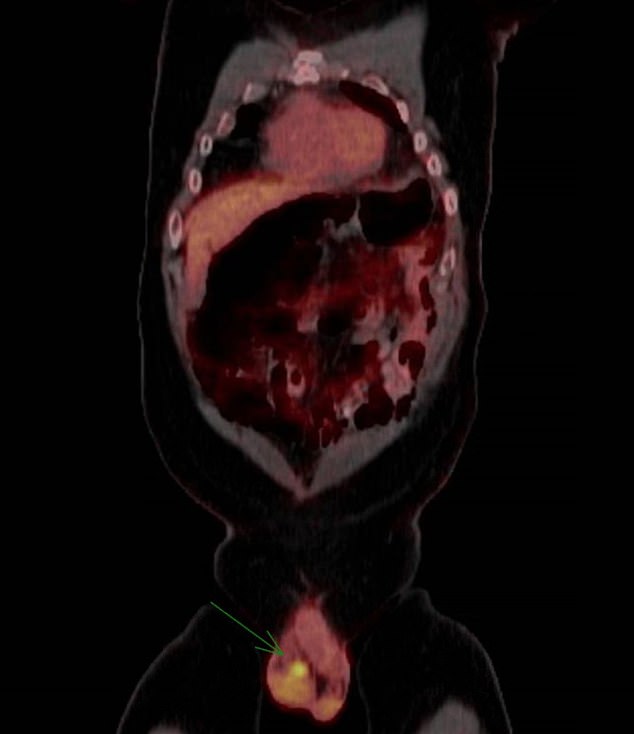 An unidentified man’s colon cancer spread to his testicle after a traumatic kick to the scrotum 20 years prior. Pictured, the scan in August 2018 which showed a suspicious mass of abnormal tissue in his right testicle

He had gone to a clinic in June 2018 concerned about a lump on in his right scrotum which had got bigger in the past year.

It had been there for almost 20 years without causing any pain or problems, the man said.

Scans showed a 1.1cm (0.4ins) tumour at the base of his testicle during scans, but it was at first believed to be benign (non-cancerous).

He wrote: ‘Around 90 per cent of the male sex hormone testosterone, is produced by the testicles.

‘Testosterone is the hormone responsible for secondary male characteristics such as muscle, bone growth, hair pattern, deep voice and a general feeling of well-being in men.

‘It is also responsible for sperm growth. Having one testicle removed should not affect the overall testosterone levels, sex drive or ability to have an erection or fertility.

‘Providing that the remaining testicle is healthy, it should do the job of both.

‘If it is performed for testicular cancer and subsequent chemotherapy is needed, men will be advised to bank sperm as chemotherapy may cause temporary infertility.

‘Men who lose both testicles are likely to have erection problems due to the reduced levels of testosterone. They will also be unable to father a child naturally.

‘When testosterone levels are minimal men will often experience a loss of libido, well-being and may experience lethargy, low mood and depression, weight gain and sometimes breast swelling.

‘In this situation testosterone replacement therapy will be needed. This can be administered in the form of injections, gels or patches but may take some weeks for levels to normalise.’

However, at a check-up three months later, a scan of the insides of his testes showed abnormal tissue was growing. It became clear it was either an infection or cancer.

The epididymis is a thumb-shaped tube with a head and tail. It stores sperm as they mature and before they are sent to the penis.

The spermatic cord is a bundle of fibres with several jobs including taking the sperm of out the testicles.

After extensive talks, the patient finally agreed to let the doctors look more closely with surgery in between chemotherapy sessions.

They took a biopsy of the mass, which confirmed adenocarcinoma, a cancer that forms in mucus-secreting glands.

Based on the results, the man had to have his right testicle removed.

Dr Wald said the cancer had spread from the bowel, which, although extremely rare, is not unheard of.

Previously cancer has been reported to spread to the testes from the stomach and other digestive organs, too.

Dr Wald said post-traumatic changes after the mule kick are possible, particularly to the lymphatic system.

The system runs throughout the body and is made of lymph nodes and lymph vessels. Its job is to drain fluid in the body.

If there was a dysfunction in the vessels around the testicle following the kick, it may have caused an ‘unusual spread’ of cancer, with cancer cells being transported through the tubes and building up elsewhere.

Spreading of colon cancer via the lymphatic vessels is fairly normal, Dr Wald said, although rarely affects the testicles or penis.

Dr Wald said: ‘The patient recovered well from surgery and is continuing treatment of his metastatic colon cancer per the medical oncology team.’