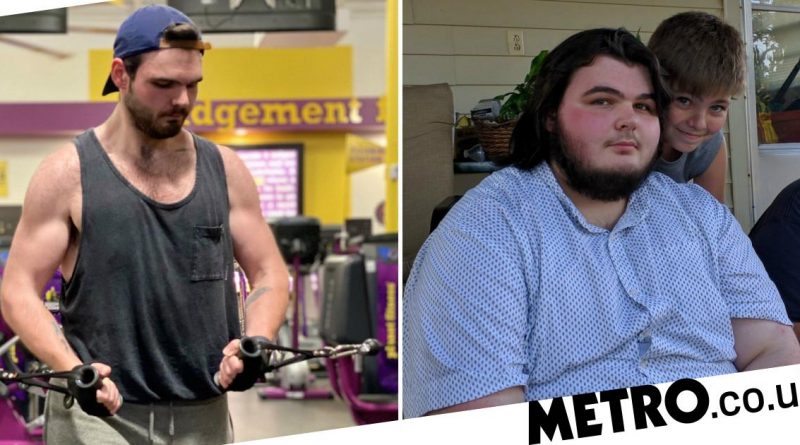 College student Dylan Wall, 21, was 425lbs when he graduated high school (around 30 stone) and decided he wanted to lose weight.

It was a 2017 visit to a potential college that made the decision for Dylan, who said: ‘During a tour of my college, I lost my group because I couldn’t keep up.

‘I knew I wouldn’t be able to make it to my classes on time if I stayed on that course.

‘Around the same time, my sister also gave birth to my nephew. I didn’t want to set that example for him.’

Dylan, of Dixon County, Tennessee, took that as the motivation he needed, but started his weight loss journey in an unorthodox (and fairly unhealthy) way.

For the first two weeks of his diet he ate only unseasoned potatoes, doing something he calls a ‘taste bud cleanse’.

In his mind, the dull taste of the potatoes would help to take away any ‘flavour addiction’ he’d been experiencing while eating sugar and fat laden junk food.

‘I started by doing a taste bud cleanse,’ said Dylan.

‘I ate only potatoes with no seasoning for two weeks. It really helped with my cravings.

‘I then cut out all dairy and red meat. For the most part, I just counted my calories. I didn’t try to make my healthy food taste good. I just ate to fuel myself. I wanted to break my flavour addiction and didn’t want to eat for pleasure.’

His diet was a complete 180 from before, having previously eaten mostly fast food and a lot of processed items.

‘I’d usually get something from McDonald’s on the way to school. I would get more than a normal portion for sure. For lunch, I’d get a double portion of whatever the school lunch was.

‘I didn’t really have a set dinner. When I got home, I’d eat on and off until I went to sleep.’

Thankfully after the potato diet, Dylan switched to a more sustainable way of eating, incorporating a variety of foods and tracking calories.

His breakfast would comprise of egg whites with two pieces of low-calorie toast and for lunch, a turkey sub with no cheese.

‘For dinner I would have something like chicken breast with three types of veggies and rice,’ he adds.

The first 180lbs was lost solely throughout diet for Dylan, with the last 40 coming off after he started going to the gym.

‘It took just under a year to lose 180 pounds. I didn’t step into the gym until I lost that first bit of weight,’ said Dylan.

Once he was ready, Dylan started off slow, beginning with only cardio.

Is the ‘taste bud cleanse’ safe?

Although this did work for Dylan, it’s not safe to eat just one food – regardless of what it is.

If you’d like to ‘retrain’ yourself to enjoy healthier foods, you should consider cutting down on added sugar and fat, and including plenty of veg and fruit as part of your meals.

Seasoning your food and cooking in flavourful ways can help you feel more inclined to enjoy vegetables or different proteins. You will need to be mindful of consuming lots of salt, but enough herbs and spices to add a bit of oomph should help you reintroduce new foods.

If you are choosing to lose weight, speak with your doctor first to find out the safest and most effective way to do so for you.

Eating whole, unprocessed, and homemade foods with plenty of variety is always going to be beneficial for your health, but you may need to restrict calories somewhat alongside this.

He added: ‘I really wanted to be able to do cardio. It was the bane of my existence.

‘At 30 stone, it wasn’t easy to run in gym class, so I did cardio everyday when I started.

‘Eventually, I got down to a 7.30 minute mile. Gradually, I also added some upper body stuff, squats, and deadlifts.

‘After the weight loss, I was left with a considerable amount of extra skin. I wanted to fill that up with muscle mass. I wanted to bulk back up the right way.

‘The last three-and-a-half stone came off a little bit slower. It took another year to get down that last 50 pounds.’

Dylan is now planning to have an operation to remove his excess skin.

He said: ‘I would do the surgery. I don’t think I knew how mentally taxing being left with the skin would be.

‘After coming this far and losing so much I’m still left with that reminder everyday.’

Dylan has now begun concentrating on helping the people in his life with their weight issues.

He said: ‘I met my current girlfriend 50 pounds into my weight loss. Since we got together she’s lost five-and-a-half stone.

Get in touch at [email protected]