‘I am burning alive’: Shop worker with ‘Man on Fire syndrome’ that leaves him feeling like he is suffering second degree burns is unable to turn the heating on this winter due to rare condition

A man with ‘Man on Fire syndrome’ is unable to turn the heating on this winter because the genetic condition leaves him feeling like he is burning alive.

He is unable to cook over the stove because if temperatures go beyond 20C (68F) he starts to burn up and his skin turns bright red.

But to add to his misery this winter, Mr Barker, from Limehouse, east London, also suffers from Raynaud’s syndrome.

The disorder stops blood from pumping properly around his body when there’s a slight drop in the thermometre.

It means the former shop worker has been left housebound, and needs to be in a room that is exactly 17C (62F) – no lower or higher. 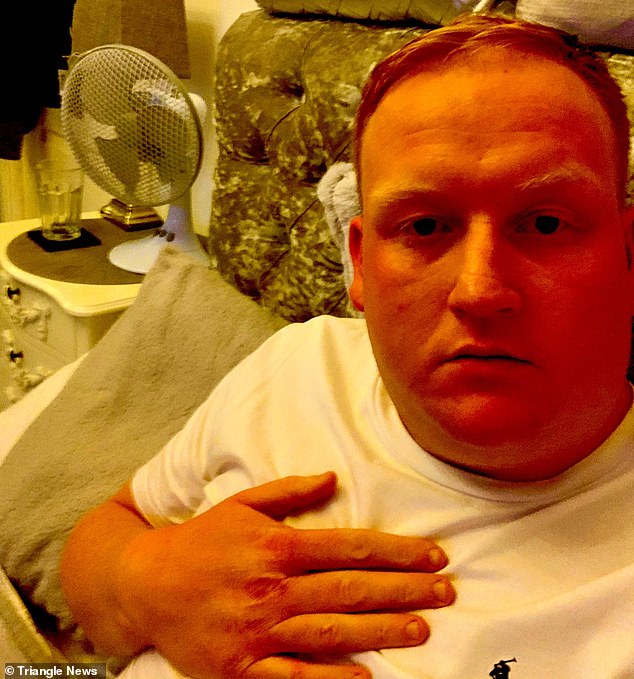 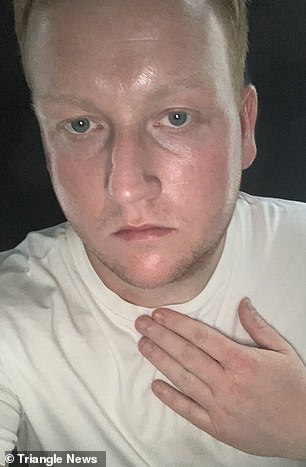 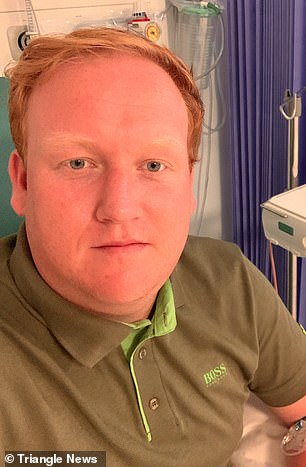 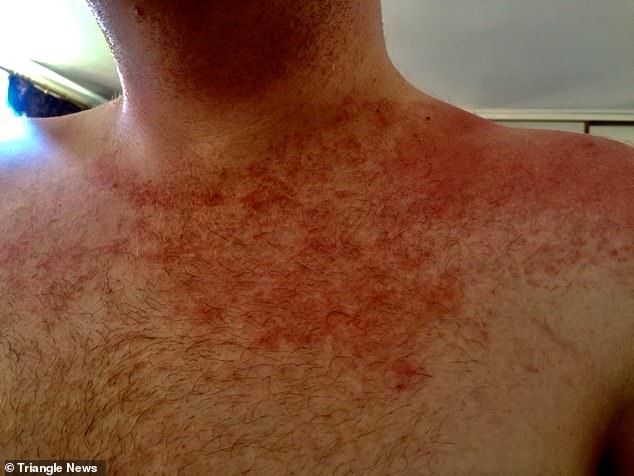 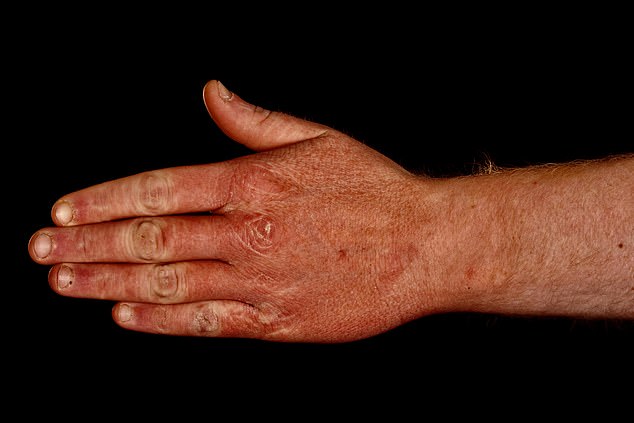 ‘It’s been very life-changing for me, it feels like I’m burning alive. The conditions are a thorn in my side, it’s like fire when you put your hand on a stove.’

Mr Barker’s friend Manik, and mother Cheryl, 65, regularly provide support for him, including cooking and cleaning because the conditions affect his mobility.

He added: ‘The conditions affect the whole right side of my body so I often find it hard to move my arms and legs.

‘I can also find walking difficult. I am able to groom myself and take a shower but I have to be extremely careful.

‘All of my food is prepared by my friend because I can’t be near an oven. The condition is always on your mind whatever tasks you perform.’ 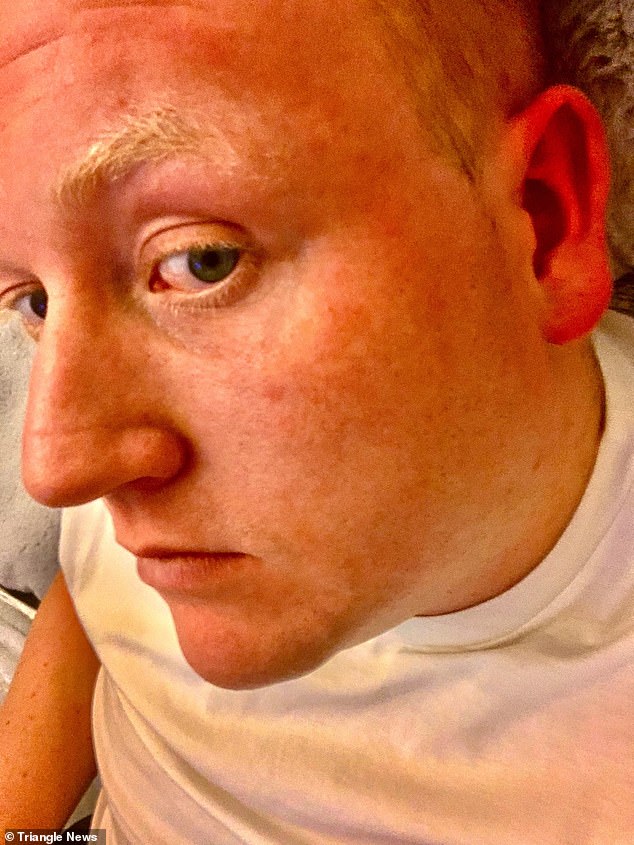 Mr Barker’s friend Manik, and mother Cheryl, 65, regularly provide support for him, including cooking and cleaning because the conditions affect his mobility 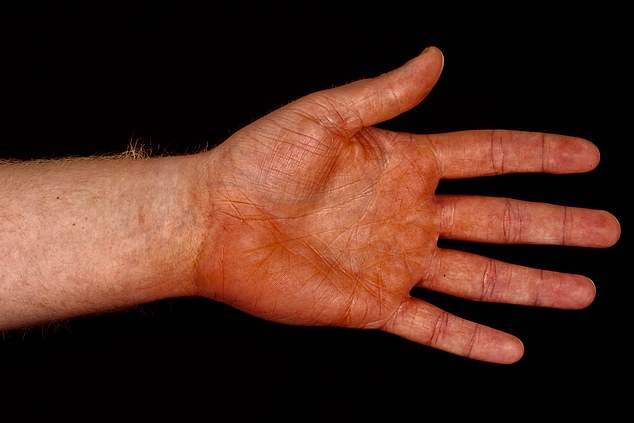 Erythromelalgia, which affects less than one in 100,000 people, causes episodes of burning pain and redness in the feet, hands, arms, legs, ears and face

ERYTHROMELALGIA – WHAT IS IT?

A rare condition that causes episodes of burning pain and redness in the feet, and sometimes the hands, arms, legs, ears and face.

Symptoms of erythromelalgia can begin at any age.

Its true prevalence is unknown but estimates suggest less than 1 per cent of people have it.

The pain can range from mild, with only a minor tingling feeling like pins and needles, up to a severe burning pain.

Symptoms are usually triggered by an increase in body temperature.

In most cases of erythromelalgia, the cause is unknown.

But it’s sometimes caused by another underlying medical condition or a faulty gene inherited from a parent.

In some people with erythromelalgia, the disease is caused by a faulty gene.

Erythromelalgia can run in families when the faulty gene is passed down from a parent to their child (inherited).

The faulty gene causes changes in the way pain signals are delivered to the brain, increasing or strengthening them.

Erythromelalgia, which affects less than one in 100,000 people, causes episodes of burning pain and redness in the feet, hands, arms, legs, ears and face.

The pain can range from mild, with only a minor tingling feeling like pins and needles, up to a severe burning pain.

Its exact cause is unknown, but the condition sees blood vessels become clogged up, which then become inflamed as the blood in trapped inside.

Mr Barker had to give up his job in retail after being diagnosed with the incurable condition five years ago.

Mr Barker added: ‘I have treatment every three months for one week for six hours a day where I am given drugs through an intravenous infusion which opens up the blood vessels.

‘This is going to be a regular routine for the rest of my life, I still need to get used to it. I am hoping for a bright future.’

To add to his plight, Mr Barker was also diagnosed with Raynaud Syndrome in 2015, which means his body reacts dramatically to the slightest drop in temperature.

It affects up to 20 per cent of the adult population, to varying degrees, and around 10 million people have it in the UK.

The condition works in the exact opposite way to erythromelalgia. When it gets cold, arteries struggle to pump blood to the limbs, nose, ears, or lips. It causes these bodyparts to go numb.

During his teenage years, Mr Barker would often spend long days at the beach and his local park as well as being an avid fan of watersports including surfing.

But since then his conditions have prevented him from exploring his hobbies.

He added: ‘I had an extremely active childhood and would spend a lot of time outside.

‘But since my diagnosis, I’ve certainly missed out on a lot of things – it’s hard to think what my normal day would be like if I wasn’t suffering.

‘My typical day is either spent at home or in the hospital.’

A medical condition in which spasm of arteries cause episodes of reduced blood flow.

Typically, the fingers, and less commonly the toes, are involved. Rarely, the nose, ears, or lips are affected.

It does not usually cause any severe problems. You can often treat the symptoms yourself by keeping warm. Sometimes it can be a sign of a more serious condition.

It affects up to 20 per cent of the adult population, to varying degrees, and around 10 million people have it in the UK.

Raynaud’s affects your blood circulation. When you’re cold, anxious or stressed, your fingers and toes may change colour.

Other symptoms can include:

The skin can turns white as blood flow is restricted.  Sometimes the skin turns blue as blood vessels react.

Some people also find their ears, nose, lips or nipples are affected.

The symptoms of Raynaud’s may last from a few minutes to a few hours.

Things you can do to help with Raynaud’s

Things you should not do

If your symptoms are very bad or getting worse, a GP may prescribe a medicine called nifedipine to help improve your circulation.

Some people need to take nifedipine every day. Others only use it to prevent Raynaud’s – for example, during cold weather.

Sometimes a GP will examine you and suggest a blood test. In rare cases, Raynaud’s could be a sign of a more serious condition, such as rheumatoid arthritis or lupus.