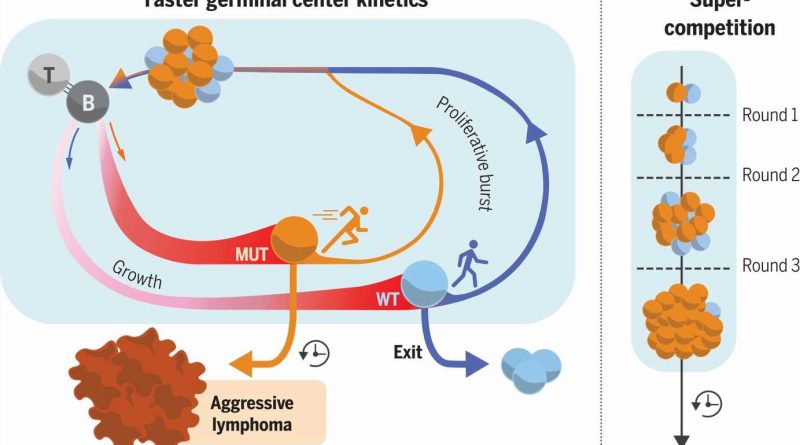 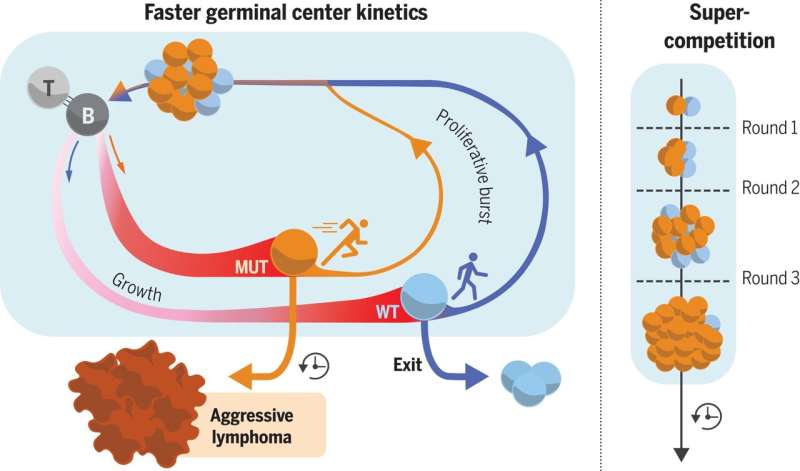 The key to understanding how the most aggressive lymphomas arise and resist current therapies may lie in mutations that disrupt a critical natural selection process among antibody-producing B cells, according to a multi-institutional preclinical study led by Weill Cornell Medicine investigators.

Diffuse large B-cell lymphoma (DLBCL) is the most common type of non-Hodgkin lymphoma, with at least 40% of cases not responding to treatment. Patients with mutations in the B-cell translocation gene 1 (BTG1) gene, which are found primarily in B-cell lymphomas, have particularly poor outcomes.

The new study, published Jan. 20 in Science, demonstrates that BTG1 acts as an important B cell “evolutionary” checkpoint that governs the natural selection process of B cells, said study principal investigator Dr. Ari M. Melnick, the Gebroe Family Professor of Hematology/Oncology and a member of the Sandra and Edward Meyer Cancer Center at Weill Cornell Medicine.

To generate powerful antibodies against new infectious agents such as COVID-19, B cells go through a cyclical process of growth, antibody gene mutation and extremely rapid cell division. Thousands of these mutating B cells vigorously compete for access to a much smaller number of immune T cells. These T cells select only a few B cells for survival, based on their capacity to bind antigens, the foreign particles on viruses and other microorganisms that trigger an immune response.

“This intense competition between individual B cells is different from the more altruistic and cooperative cell behavior found in all other tissues in humans, and is more similar to how single-celled organisms compete with each other,” Melnick said.

The interaction with T cells is required for B cell survival because it triggers the transient expression of a potent cell growth regulator called MYC, which fuels cells metabolism to generate the building blocks needed for subsequent bursts of cell division.

BTG1 acts as a gatekeeper to ensure that only a few selected B cells survive this competitive natural selection process, while also reining in the competition, by preventing inappropriate fueling through MYC. To achieve this delicate balance, BTG1 controls the rate of MYC protein expression in B cells. BTG1 mutations occur in about 70% of the most aggressive form of DLBCL and cause this process to go awry, allowing for more rapid induction of MYC protein expression in B cells.

“The effect is tiny from the molecular standpoint,” Melnick said. “It amounts to a roughly 10% increase in the rate of MYC protein production.”

However, this small effect enables BTG1-mutant B cells to edge out and take over the immune response by outcompeting healthy B cells during T cell-driven natural selection. This effect enables B cells to undergo more mutation cycles, which puts them at risk for damaging other genes and eventually becoming cancerous.

“In this study, BTG1 mutation accelerated lymphoma formation and led to extremely aggressive cancers that spread throughout the body in mice, which is reminiscent of what happens in patients” said Coraline Mlynarczyk, the paper’s first author, and a research associate in Melnick’s lab. “Therefore, this tiny 10% effect provides, over time, an important gain of ‘fitness’ and leads to highly aggressive diseases.”

The study also illustrates evolution’s sensitivity to small effects that can dramatically increase cell fitness in the context of competition, Melnick said. In addition, such alteration of B cell natural selection is strikingly similar to the process of super-competition in developing organs in insect and animal embryos. There too, small differences in MYC expression allow super-competing cells to completely take over formation of new tissues.

“Lymphomas are strange and pernicious tumors because they arise from the immune system, which is supposed to protect us against cancer,” Melnick said. “Since we currently do not have therapies that work for these patients, understanding the processes involved in the development of the worst and most lethal forms of DLBCL is the first step toward intervention.”

“Scientists working together in teams drive the most rapid research advances,” he added, citing important contributions to this study from Gabriel Victora, a basic immunologist at the Rockefeller University and Michael Meyer-Hermann, a mathematician at the Helmholz Center for Infection Research in Germany.