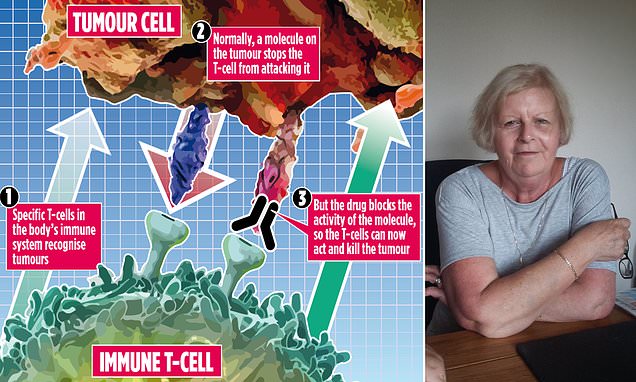 Patients ravaged by advanced bowel cancer have been thrown a lifeline – thanks to a breakthrough drug hailed by experts as a game-changer in the fight against the disease.

A landmark trial found immunotherapy treatment pembrolizumab, which helps the body attack and kill cancer cells, doubled the length of time it took for the disease to worsen, compared to standard chemotherapy treatment.

Incredibly, more than one in ten patients with a specific sub-type of bowel cancer saw their cancer disappear altogether, according to data presented at the American Society of Clinical Oncology (ASCO) annual meeting this weekend.

And years after finishing treatment, some are still free of disease. 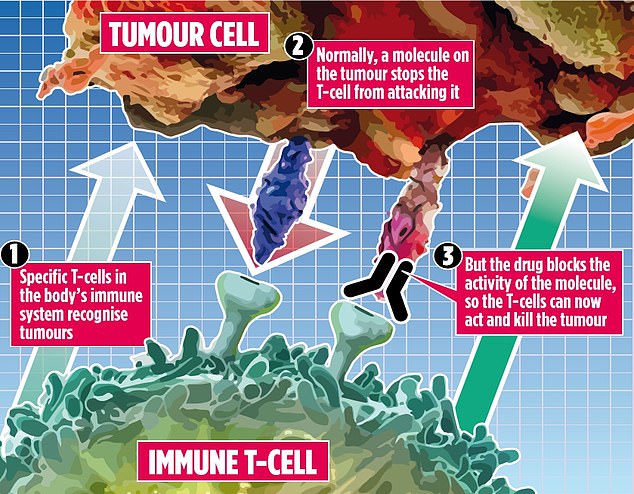 The lead author of the Keynote-177 trial, Thierry Andre, of the Sorbonne Universite and Hopital Saint Antoine in Paris, said there was a genuine hope that some patients, who would have been deemed terminal, would now be cured.

Diane Reynolds, 72, from Peterborough, is one of those to benefit from the new drug. After a few weeks of treatment, her tumours, which had spread across her abdomen, had shrunk by half. And within six months they had disappeared entirely.

‘I thought they must have made a mistake with the initial diagnosis – I couldn’t have had cancer,’ she says.

‘You can’t have cancer and have three rounds of immunotherapy and find it’s gone. Fortunately, that was true.’

But not all bowel cancers are the same. Approximately 15 per cent of patients diagnosed have specific genetic mutations known as microsatellite instability-high or mismatch repair deficiency.

These DNA mutations, which can be inherited but sometimes occur randomly, mean cells cannot repair themselves correctly if they are damaged.

Over time, this can lead to the development of cancer. If treated early, this group of patients do well. But at later stages they are less likely to respond to chemotherapy and have a reduced chance of survival.

It is estimated that five per cent of patients with advanced bowel cancer have these specific mutations. But researchers hope that, thanks to immunotherapy drugs such as pembrolizumab, this may now be about to change. 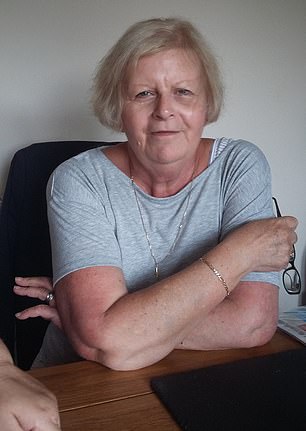 Diane Reynolds, 72, from Peterborough, pictured, is one of those to benefit from the new drug

‘Some patients on the trial have had a complete response to this therapy, are very well and have now been in remission for more than three years,’ says Dr Kai-Keen Shiu, the trial’s UK chief investigator. ‘The results should now revolutionise the way we treat these types of bowel cancer patients.’

Also known as Keytruda, pembrolizumab acts as fuel for the immune system. Given via an intravenous drip for 30 minutes every three weeks, it works by blocking the activity of a molecule called PD-1 that is found on the surface of T-cells – the white blood cells that help the body fight infection.

Blocking PD-1 has a number of effects on the body’s immune system, including activating specific T-cells to attack and kill tumours, so they can’t keep growing and multiplying.

More than 300 advanced bowel-cancer patients with these specific DNA mutations were involved in the Keynote-177 trial.

One group received standard chemotherapy every two weeks. The other group were given pembrolizumab for up to two years.

Remarkably, patients who were given the immunotherapy drug saw their cancer remain stable for an average of 16.5 months, compared with 8.2 months for chemotherapy.

At the two-year mark, in about half of those on immunotherapy, their disease was still not worsening.

‘There appears to be a lasting benefit,’ says Dr Shiu, who is also Associate Professor in oncology at University College London’s Cancer Institute.

‘It seems you need immunotherapy to kick-start your immune system enough, so it recognises your cancer, to keep it under control for many years.’

Diane Reynolds was diagnosed with cancer early in 2016, after suffering what she initially believed was appendicitis. ‘I eventually went to A&E,’ she says.

‘Doctors thought it was appendicitis, too, and operated. But instead they found a big mass, underneath my appendix.’

Test results showed it was bowel cancer – but it appeared to have been caught early, and Diane had no further treatment.

Six months later, however, scans revealed the disease had spread. ‘There were multiple tumours in my abdomen, which had developed in the months after my surgery,’ Diane says.

She accepted an offer to join the Keynote-177 trial, starting in December 2016, and was randomly selected to receive pembrolizumab. After three rounds, scans showed some inflammation on her lungs. 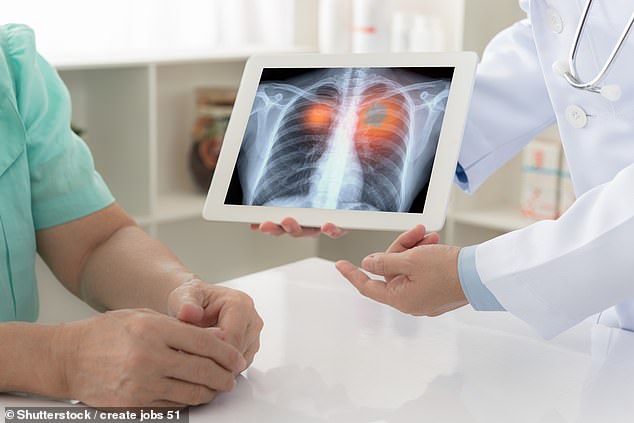 Pembrolizumab has already shown to be effective in treating advanced melanoma skin cancer – which would previously have killed patients within a year or two – as well as lung cancer, pictured, and bladder cancer

This can be a side effect of immunotherapy, suggesting the immune system is over-reacting to the drug, and her treatment was suspended as a precaution. But the tests also revealed astonishing results.

‘My tumours had shrunk by half,’ she says. ‘Then at the end of April, the doctor told me I had no tumours. They had gone, and I didn’t need any more treatment. I was amazed it happened so quickly.’

Pembrolizumab has created significant excitement in the medical world. It has already shown to be effective in treating advanced melanoma skin cancer – which would previously have killed patients within a year or two – as well as lung cancer and bladder cancer. But researchers now believe it could prove effective against even more cancers.

‘If you have this genetic subtype of cancer, it looks like in any tumour type you will respond to treatment,’ Dr Shiu says. ‘Ongoing trials are seeing if immunotherapy, given instead of chemotherapy, will benefit these patients as much as the Keynote-177 trial has shown.’

Researchers continue to investigate whether immunotherapy could help a wider group of patients with bowel cancer when combined with other treatments. This is because previous trials found that advanced bowel cancer patients who do not have these genetic changes do not respond to immunotherapy alone.

In the meantime, the outlook appears brighter for at least some diagnosed with this bleak disease.

Genevieve Edwards, chief executive of Bowel Cancer UK, says ‘These findings have the potential to be game changing for people with advanced bowel cancer with these specific genetic changes.

‘While we’re still some way off having pembrolizumab in routine use on the NHS, this is a promising step in the right direction.’