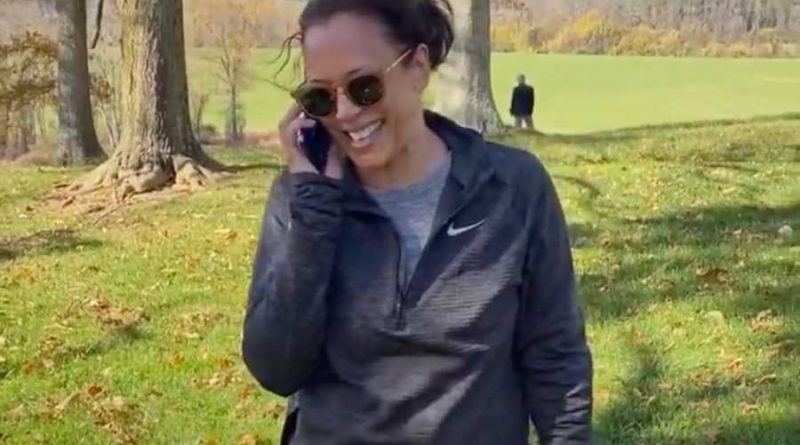 Despite her packed schedule as the new vice president, Kamala Harris is still making time to get in a workout.

Over the weekend, tourists and fellow exercisers in Washington, D.C., spotted Harris, 56, jogging up the steps at the Lincoln Memorial with her husband Doug Emhoff. In the 30-second video, which went viral on social media with more than 4.2 million views on Twitter, Harris runs up and down the steps with secret service agents standing by. Emhoff, who beat her to the top, gives Harris a high-five when she gets there.

The video was originally posted by Bobby Tran, a local runner who had planned a stop at the memorial during a 5-mile run with his girlfriend so they could check out a special portrait of Harris that was on display.

"It was amazing running into Madam @VP during our 5 miler this morning! 🤩" he wrote on Instagram. "We checked out the @TheGlassCeilingBreaker display dedicated to her then noticed that she and @SecondGentleman were actually running steps at the Lincoln Memorial behind us."

"I also loved how he waited atop the steps to give her a supportive 🖐🏼 too! #coupleswhorunogether 🙌🏼" Tran added.

Harris has long been diligent about exercising — in a video with former President Barack Obama from before the election, she said that working out is one way she manages the stress of the campaign trail.

"I work out every morning, regardless of how much sleep I've had. It's just the best way to start the day," Harris said, adding that she had to make some adjustments at the start of the pandemic. "For months, I couldn't find weights, to order weights, they were sold out. So I had these liter water bottles that I filled, of course, with water, and I used them as hand weights."

And Biden joked to Buttigieg that if he tries to skip a workout, his wife, Dr. Jill Biden, a marathoner who "works out every day" will find a gap in his schedule to get him in the gym.